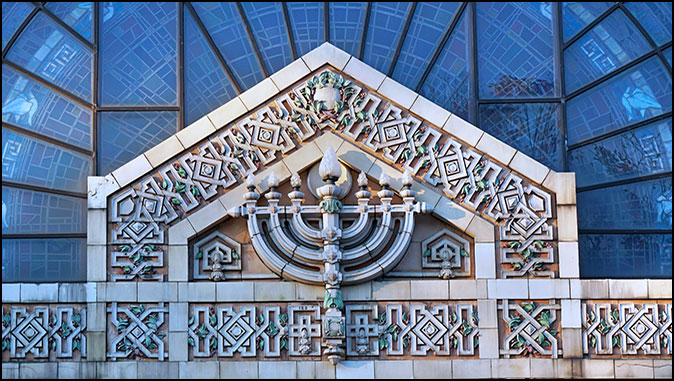 Jews, Not Muslims, Are the Primary Victims of Religion-Based Hate Crimes in the U.S.
Yet the media continues to focus on the phantom of “Islamophobia.”
By Robert Spencer

As the nation observed the twentieth anniversary of the 9/11 jihad terror attacks, the establishment media’s focus was largely on how Muslims were victimized in the wake of the attacks. A wave of “Islamophobia” supposedly swept over the United States, and is still very much with us. Reality, however, is (as usual) sharply different from the establishment media narrative. Jews, not Muslims, have both before 9/11 and after been the far most common victim of hate crimes in the United States. Yet the media indefatigably focuses on “Islamophobia,” not anti-Semitism.

George W. Bush got the ball rolling on September 17, 2001. He appeared at the Islamic Center of Washington, D.C., in the company of several prominent Muslim leaders, including Nihad Awad of the The Hamas-linked Council on American-Islamic Relations (CAIR) and Abdurahman Alamoudi of the American Muslim Council, who is now in prison for funding al-Qaeda, and put the spotlight squarely on Muslims as victims:

America counts millions of Muslims amongst our citizens, and Muslims make an incredibly valuable contribution to our country. Muslims are doctors, lawyers, law professors, members of the military, entrepreneurs, shopkeepers, moms and dads. And they need to be treated with respect.

In our anger and emotion, our fellow Americans must treat each other with respect. Women who cover their heads in this country must feel comfortable going outside their homes. Moms who wear cover must be not intimidated in America. That’s not the America I know. That’s not the America I value. I’ve been told that some fear to leave; some don’t want to go shopping for their families; some don’t want to go about their ordinary daily routines because, by wearing cover, they’re afraid they’ll be intimidated. That should not and that will not stand in America.

Those who feel like they can intimidate our fellow citizens to take out their anger don’t represent the best of America, they represent the worst of humankind, and they should be ashamed of that kind of behavior.

The only problem with this was that Muslims were not being subjected to wholesale vigilante attacks in the United States, at that time or at any point subsequently. A Sikh, Balbir Singh Sodhi, was mistaken for a Muslim and murdered on September 15, 2001; the following day, a Muslim, Waqar Hasan, was murdered. On October 4, 2001, the man who murdered Hasan, Mark Anthony Stroman, killed a Hindu named Vasudev Patel, mistaking him for a Muslim.

That was all. These three murders were heinous crimes; Balbir Singh Sodhi’s killer, Frank Silva Roque, is serving life in prison, and Mark Stroman was executed in 2011. But to claim that “9/11 released a dangerous wave of white supremacy and Islamophobia that, two decades later, continues to manifest in attacks on members of a variety of belief traditions,” as AP did in noting the anniversary of Balbir Singh Sodhi’s murder Thursday, is wildly exaggerated. Muslims have not suffered widespread persecution, discrimination, and harassment in the U.S. since 9/11. FBI hate crime statistics bear this out.

In 2000, the year before the 9/11 attacks, the FBI noted 33 anti-Islamic hate crimes; in 2001, that number skyrocketed to 546. That’s 546 too many, but a bit of perspective is in order: also in 2001, there were 1,117 anti-Jewish hate crimes. These were not, mind you, all violent incidents: the FBI report explained that “A review of the total offenses (11,451) demonstrated that intimidation was the most frequently reported hate crime, accounting for 37.9 percent of the total. Destruction/damage/vandalism made up 26.4 percent; simple assault, 18.8 percent; aggravated assault, 10.8 percent. The remaining offenses accounted for 6.1 percent of the total.” Intimidation can be just saying something rude, or something perceived as rude.

Yet ABC News gave a Muslims-As-Victims spin to all this on September 11 when it stated: “Hate crimes against Muslims rose 1617% from 2000 to 2001, according to the FBI marking some of the highest numbers of Islamophobic hate crimes ever in the U.S. But even as the country moved further from the attacks and the Muslim American population in the country grew, discrimination against this community has not waned, Pew Research Center reports.”

This kind of “journalism” is published as Jew-hatred becomes increasingly legitimized on the Left. Around the time of the recent conflict between Hamas and Israel last spring, Palestinian Muslims and their supporters committed acts of violence against Jews and supporters of Israel all over the United States. In New York City, a Muslim mob screaming “Allahu akbar” attacked a Jewish man in midtown Manhattan. Also in Manhattan, Palestinians threatened violence and screamed anti-Semitic slurs at Jews. One threw a mini-firebomb. Pro-jihad protesters stormed a restaurant and spat on Jewish patrons; one of the thugs threw a bottle. A Muslim, Waseem Awawdeh, was arrested for viciously beating a Jew in Times Square.

In Los Angeles, Palestinian protesters asked people dining at the Sushi Fumi restaurant if they were Jewish, and proceeded to attack them with knives. Elsewhere in Los Angeles, two cars festooned with Palestinian flags chased a Jewish man down a street as he was leaving his synagogue. In Florida, a van also bearing a Palestinian flag and emblazoned with the slogan “Hitler was Right” drove past a pro-Israel demonstration. In Skokie, Illinois, a pro-jihad vandal wearing an Arab headdress smashed a synagogue window and left a Palestine flag and a pro-jihad sign inside. And in Boston, an anti-Semitic Muslim migrant named Khaled Awad approached a rabbi outside a Jewish day school and stabbed him eight times.

There will likely be much more of this, while the media continues to hunt for “Islamophobia” and demonize and stigmatize all those who stand against jihad violence and Sharia oppression of women. The facts are clear to anyone who searches for them, but most people won’t; and establishment media “journalists” will continue to do all they can to hoodwink Americans into swallowing their tendentious, inaccurate, and divisive narrative.