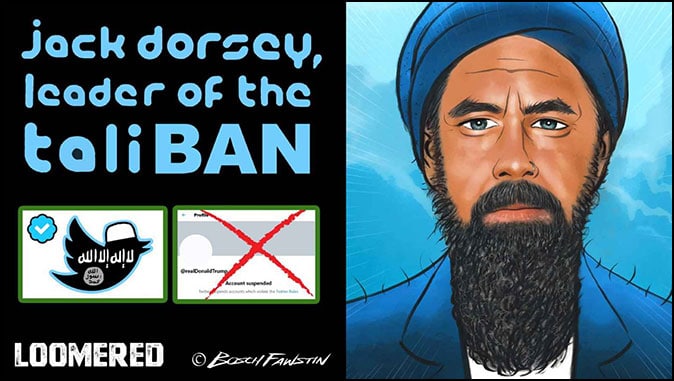 This is a cartoon I was commissioned to draw for Laura Loomer, and being someone who was banned by Twitter for life for criticizing Islam, as Laura has been, it was a pleasure to take part in it, particularly for the fact that Twitter head Jack Dorsey routinely bans Islam critics, while not banning Islamic terrorists who’ve murdered Americans. As Laura puts it:

For years, I have been raising awareness about Twitter’s alliance with Islamic terrorist organizations and their willingness to platform enemies of America. This is a concept I have referred to as Silicon Sharia, as Twitter has shown they have no problem banning millions of Americans for their constitutionally protected speech, including myself and sitting President Donald Trump during our elections, while they happily provide a platform for recruitment and propaganda for actual terrorists.

And here’s a thought I had on the matter:

I wonder that if our government ever were to officially declare war on the Islamic enemy, if this aiding and abetting of an enemy in a time of war that Twitter engages in would be legally recognized as such.

To read more thoughts from me and Laura Loomer about the free speech campaign, and to see pictures and videos of my cartoon pasted on Twitter HQ in San Francisco, visit the Gateway Pundit story about it here.

Jerusalem Consulate: A Nail in the Coffin of Peace

Jerusalem Consulate: A Nail in the Coffin of Peace By Richard Kemp Originally Published by…

Eloi and Morlocks in Portlandia

The Left Is Evil – And Liberals Keep Voting For Them

The 'Religious Exemption' Inquisition A man can call himself a woman, and everyone must play…