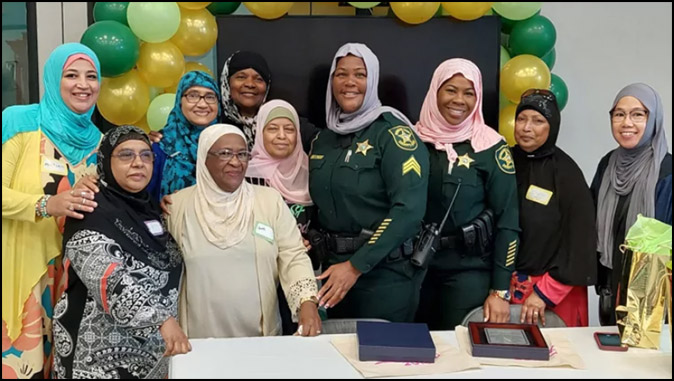 Islamist Infiltration of the Broward County Sheriff’s Office
Gregory Tony and his subordinates partner with those who wish us harm.
By Joe Kaufman

In 2014, then-Broward County Sheriff Scott Israel set a terrible precedent, when he hired Nezar Hamze, a representative from CAIR, a group with numerous links to terrorism, as a Deputy at the Broward Sheriff’s Office (BSO). Hamze ‘opened doors’ for Sheriff Israel, by introducing the Sheriff at radical mosques. Five years later, Israel was removed from his position and replaced with Gregory Tony. Yet, not only has Tony kept Hamze on the force, but he has gone much further in his embrace of Islamists, even having them participate in his 9/11 memorial. Why is Sheriff Tony legitimizing these sinister entities and exposing the BSO to such security threats?

The BSO has found a dangerous partner in the Islamic Center of South Florida (ICOSF), a radical mosque located in Pompano Beach. This past April, Sheriff Tony and a number of BSO officers showed up to ICOSF for a Ramadan ‘Break the Fast.’ In June, it looked as if the entire BSO showed up to the mosque’s 2022 Summer Camp. In October, the ICOSF Sisterhood sponsored a BSO event at the mosque, where the female BSO representatives donned hijabs.

ICOSF is owned by the North American Islamic Trust (NAIT), a group named by the US a co-conspirator to Hamas financing. ICOSF’s Imam Hasan Sabri has cursed America as an “enemy” and threatened Muslims who accept her help. ICOSF regularly brings controversial imams Monzer Taleb and Fadi Kablawi to the mosque to give khutbahs (sermons). Taleb is a self-professed member of Hamas, who posted on Facebook that Jews in Israel “should be relocated to Germany.” Kablawi, who the FBI says is a member of ISIS, has called Jews “the lowest of the lowest”; blamed women for rape; and said gays should thank him for their continued existence.

Appearing in a number of photographs with Sheriff Tony is ICOSF’s Dawah Director Rasheed Mahamad. Apart from his involvement with the mosque, Mahamad is the Assistant Secretary of the American Muslim Association of North America (AMANA), a group that has been condemned by the Anti-Defamation League (ADL) for posting “venomous” anti-Semitic material on its official website and whose President Sofian Zakkout was removed from two prominent anti-crime boards for his support of Hamas and Holocaust denial.

This past September, Sheriff Tony hosted a ‘Unity in Faith Prayer Breakfast and 9/11 Memorial,’ which, according to Tony, “joined BSO and the community to pray and honor the men and women who lost their lives on September 11, 2001.” A photo from the event has the Sheriff bowing has head in prayer with Shafayat Mohamed, the Imam of the Pembroke Pines-based Darul Uloom Institute (DUI), which has been a haven for high-profile al-Qaeda terrorists. Mohamed, himself, has been thrown off a number of Broward boards for his harsh rhetoric against homosexuals.

Also attending the 9/11 Memorial and posing for photos with the Sheriff were Samir Kakli and Gibson Lopez, representatives from the South Florida Muslim Federation (SFMF), an umbrella group for radical Muslim institutions. In the pics as well was Sultan Mohiuddin, Imam of the Islamic Foundation of South Florida (IFSF), another radical mosque with a sordid history. IFSF has hosted a talk by Mazen Mokhtar, ex-admin for an al-Qaeda finance/recruitment website and supporter of suicide bombings. IFSF’s ex-Youth Director Abdur Rahman al-Ghani, used social media to label Jews “demonic” and America the “World’s Number One Terrorist Organization.”

Last month, Sheriff Tony and the BSO hosted a ‘National Faith & Blue’ community event, featuring “Games, Competitions, Prizes” and a “Musical Concert.” However, the event also featured a prayer made by Mohiuddin and photo ops once again with Mohiuddin and the Muslim Federation.

A common element at these BSO events is the presence of BSO Colonel Munib Ahmed, who holds the secondary title of Executive Officer to the Sheriff. Essentially, Ahmed is second in charge to Sheriff Tony, and his profile is depicted as such on the BSO website. His prominence in the event photos is undeniable. It appears that Ahmed, a Muslim whose parents grew up in Saudi Arabia and India, is the go-between for Sheriff Tony and the radical Muslim community. Colonel Ahmed is Sheriff Tony’s Nezar Hamze version 2.0.

Recently, Sheriff Tony was added to the Brady List, a watch list that prosecutors use to keep track of law enforcement officers who have engaged in or have been accused of misconduct. Questions have arisen about Tony’s truthfulness regarding things that transpired when he was in his early teens. This has made him a candidate for potential removal from office. However, Sheriff Tony’s actions regarding Islamists amount to far worse infractions with far reaching repercussions.

Sheriff Tony’s continued embrace of terror supporting Muslims and their mosques is a blatant conflict of interests vis-à-vis his oath to ‘protect and serve’ the community, whose safety is his responsibility. His dereliction of duty, in this regard, must not remain unchallenged. The public should be calling for his immediate resignation to prevent further harm to their well-being and national security.