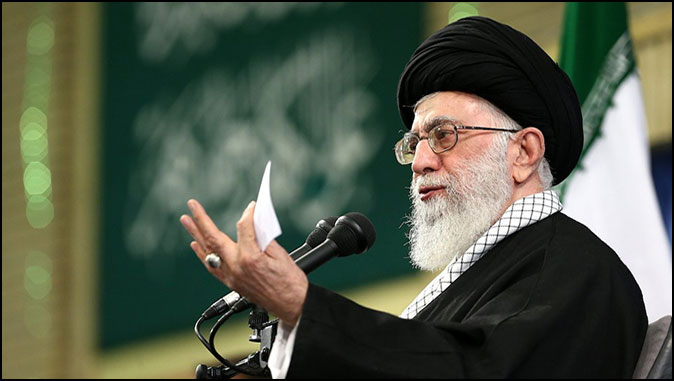 Iran’s Khamenei Mocks ‘the Previous Dope’ and ‘This Poor, Demented Incumbent Guy’
And the Incumbent Guy’s handlers still hope for a new nuclear deal with the Mullahs.
By Robert Spencer

His country is in turmoil, with his citizens everywhere calling for an end to his vicious, inhumane regime, but Ayatollah Ali Khamenei, supreme leader of the Islamic Republic of Iran, still found time to offer a trenchant analysis of the American political scene, including acidic characterizations of Donald Trump and Old Joe Biden. He also led loyalist crowds in chants of “Death to America.” Meanwhile, Biden’s handlers reiterated that they were still hoping to conclude a new nuclear deal with the mullahs. Yes, they’re that crazy.

The Washington Free Beacon reported Wednesday that “Khamenei’s comments come as the Biden administration said this week it is still interested in reaching a nuclear deal with Iran, despite a reported stalemate in the negotiations and the Iranian government’s ongoing violent crackdown on nationwide anti-government protests.”

This comes even as Khamenei, according to the Middle East Media Research Institute (MEMRI), claimed that the U.S. and the West just couldn’t stand to see the Islamic Republic prospering:

“The problem that the West and the arrogant [U.S.] have with the Islamic Republic is that it is advancing and flourishing. Everyone has seen this advancement and is acknowledging it. This is intolerable and unbearable for the West. Their problem is that Iran is advancing. Had we not made any progress, had we not demonstrated a strong presence in the region, had our voices quivered while facing America and the arrogant [West], and had we been willing to accept their bullying and aggression, then all this pressure [on Iran] would have subsided. Obviously, in such a case, they would have come here and taken over, but the sanctions, the pressure, and so forth, would have subsided.”

It takes a particular kind of chutzpah to say such a thing while the Iranian people are protesting against the regime in part because it squandered the billions Obama showered upon it on international terrorism rather than spending it on its own people. Surely even Khamenei must be beginning to realize, after all these weeks of protests, that a large segment of his own people isn’t buying his deceptions anymore, but nonetheless he plowed on. It takes even more chutzpah to say this in light of the fact that the nuclear deal that Biden’s handlers so desperately want to conclude with the Islamic Republic would immediately bring it seven billion dollars, with many more billions to come. Yet Khamenei apparently expects his people to believe that the U.S. doesn’t want to see Iran prospering. He may actually be right about that: Biden’s handlers don’t seem to want to see the Iranian people prospering, just the mullahs.

But Khamenei claimed that all the U.S. presidents without exception since the beginning of the Islamic Republic have been hostile to it. “All the American presidents,” he continued, “in the decades that have passed since the revolution, have fought the Islamic Republic on that front. It does not matter where they are now. Some of them have dropped dead, and some have been cast in the garbage bin of history, even if still alive: starting with the Democrats Carter, Clinton, and Obama, and endling with the Republicans Reagan and Bush. This includes the previous dope [Trump] and this poor demented incumbent guy who wants to save Iran and the Iranians. All of them, without exception, have confronted the Islamic Republic.”

Can we get a fact check on this? Jimmy Carter admired Khamenei’s predecessor, the Ayatollah Khomeini, and abandoned the shah of Iran, a loyal American ally, so that Khomeini could found the Islamic Republic. Reagan administration officials sold arms to Iran in order to use the money to aid the Contras, who were fighting the Communist Sandinistas in Nicaragua. Obama sent pallets of cash to the mullahs in the dark of night and facilitated a deal that was supposed to limit Iran’s ability to develop nuclear weapons but actually paved the way for the Islamic regime to become a nuclear power. The “poor demented incumbent guy” wants to send the mullahs more billions. So have all the presidents fought the Islamic Republic? If only. The “previous dope” did, but that’s really about it.

And so the U.S. ambassador to Israel, Thomas Nides, just said that a new Iran nuke deal is “not off the table…Nothing’s ever off the table,” although he said he was “not holding my breath for any negotiation with the Iranians in this current form.”

That’s good, at least. After Khamenei finished his speech, the crowds chanted “Death to America!” Charming. We can only hope that the “poor demented incumbent guy” doesn’t end up empowering the people who were doing the chanting.