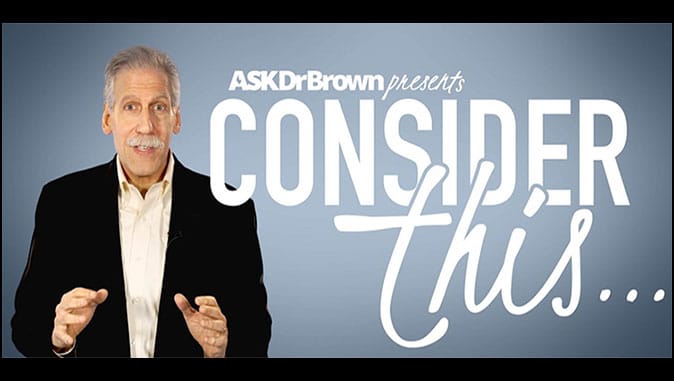 In the first segment, Jewish-Christian prophetic voice Dr. Michael Brown shared his testimony and gave advice about how Christians can cut through all of the noise in this world and focus on what’s important. Now he’ll discuss his passion for bringing Jews to Jesus.

Our Nation’s Only Hope

Tim Moore: Dr. Brown, in late 2020, you participated in “The Return” which was held in Washington D.C. and hosted by other prophetic voices to America such as Jonathan Cahn as well as a number of other evangelical leaders. The focus of this event was on calling Americans to return to faith in the God of Abraham, Isaac, and Jacob as manifested in Jesus Christ. Do you think there really is any hope for our culture, our country, and our society? Or, is the return we advocate as Christians a personal response that individuals must make alone? Is our culture really beyond hope?

Michael Brown: I believe there is hope because God continues to work and God continues to stir the hearts of man towards Him. What blessed me being at “The Return” on September 26th in D.C. was that it wasn’t a politically-based event. There was no mention of praying for President Trump or praying for the elections, rather we prayed for God’s will. The greatest emphasis was on repentance by the Church.

I believe there is hope because God keeps laying it on our hearts to have gatherings like this. God calls Christians to get on our faces and repent of our sins. Some Christians have been praying for decades for a fresh wave of revival and reawakening in America. If you go back in American history to around 1726, Reverend Joseph Butler said this to the colonies, “Religion lay as it were dying in America.” Then go to 1800 when Chief Justice John Marshall said, “The Church has fallen too far to ever recover.” That was 1800! So, we’ve been in miserable situations, not exactly as bad as this, but in miserable situations throughout U.S. history where revival and awakening were the key to restoring America to God.

Today, though, we’ve got to get desperate about repentance, for it could already be too late for America as a nation. Only God knows that. So, we’ve got to pray with desperation. Then we’ve got to do what we can do with our lives in the here and now. We don’t know if this is the last generation on earth, but as my church’s missions director says, “It’s our last generation.”

We get one shot at revival. As we pass this world onto our kids and grandkids, what’s it going to look like?

Tim Moore: We always have to be working to raise up new fruit-bearers. An old Jewish proverb says, “If you think the world is going to end tomorrow, plant a tree today.” Not just a literal tree, although that’s not a bad idea, but to raise up young generations of Americans and people around the world who will continue to bear much fruit for the Lord.

Tim Moore: As much as I appreciate your insights on American culture, I would like to now turn to your expertise on sharing the Gospel with the Jewish people. Your own testimony as Jew for Jesus demonstrates the power of God. Jesus, the Jewish Messiah, came first for the Jews, but then also for the Gentiles. In Him and only through Him do we find salvation and fulfillment as children of God.

You have documented in your writings how some Gentile Christians have now adopted Dual Covenant Theology. This belief suggests that the Jewish people will come to salvation through adherence to rabbinical Judaism rather than by recognizing Jesus as the Messiah and by putting their faith wholly in Him. This resurging Messianic Judaism negates the importance of evangelizing the Jewish people. What is the danger in this evangelical attitude that we don’t have to share the Gospel with the Jewish people?

Michael Brown: A Messianic Jew would say that Jews need Jesus. Dual Covenant Theology came out of a call for a Post-Missionary Messianic Judaism which says, “Let Jews who believe in Jesus do that, but other Jews have their own way of salvation.” Look, if that was the case, if Jews could be saved outside of Jesus, and there are Christian Zionists who say, “Hey, we stand with Israel, but we don’t want to share the Gospel because Jews have their own covenant with God…” If that was the case, Jesus would not have had to come and die. Yeshua came for the lost sheep of the house of Israel. He came first and foremost, according to Matthew 1, to save His people from their sins. If we could be saved outside of the blood of the cross through good works, say through Torah obedience, then we wouldn’t need Jesus. We wouldn’t need the Messiah.

The whole New Testament in the Gospels is to the Jew first and also to the Gentile, and that Israel will be saved through the Messiah. So, they make a mockery of the cross. Paul said that if salvation could come through the Law then we made the grace of God of no effect whatsoever. So, Jesus the Messiah died for Israel, and Israel can only be saved through Him. Under the Law, we all fall short, and no one can be saved by the Law alone.

I have dear friends who are religious Jews. We have interacted for decades now, sometimes very in-depth and back and forth. I see the sincerity of their lives. I see the beauty of many of their traditions. But, I know as Paul writes in Romans 3 that by the Torah comes the knowledge of sin. Torah brings us to the Messiah. But, Torah does not save. Evangelicals are doing a great disservice to my Jewish people when they withhold the Gospel from them.

Tim Moore: Amen! One of my friends in Israel is a passionate follower of the Lord Jesus Christ. He said that he came to America after a time serving in the IDF — the Israeli military — as a very brash and self-absorbed young man. He ended up getting a job here in the States working for a man who had been praying every day for twenty years, “Lord, send me a Jew with whom I can share the Gospel.” Once he met this very smug and arrogant young Israeli, he said, “Lord, send me any other Jew but this one!”

Fortunately, my friend was faithful to the call and to the opportunity to share the Gospel with this young man who then became a follower of Jesus Christ. He’s now a passionate evangelical preacher to the Jewish people living in Israel. What would you say to Gentiles here in the States and elsewhere about how to go about sharing Jesus Christ and the Gospel with their Jewish friends?

And then, share your testimony. Everybody has a testimony. Testimonies make big a difference.

Also, recognize that in America probably 90% of the Jews you meet will not be religious Jews, they will not be Sabbath-observant, and they will not be that familiar with the Scriptures. They may think of Jesus in an alien, foreign way because during Church history the Church persecuted and rejected the Jewish people. Rather, build a relationship and share your testimony. And then, if they are interested, open up the Scriptures and begin to show them the Messianic prophecies that Jesus is the one true Messiah.

And, your prayers make a difference. It was the prayers of Gentile Christians that God used to bring me into the Kingdom.

Tim Moore: Dr. Brown, as an expert on the dangerous trends in American culture and the Jewish people coming to faith in Jesus Christ, what would you say to the diaspora Jews here in America who are steeped in American culture but who have not yet met Jesus as the Messiah?

God called the Jewish people to be the light of the world. God called us to live separate from the pagan world. How do we bring redemption to the world? It is through one of our own — Yeshua the Messiah. Don’t look at Yeshua as some alien or some outsider, but find out why He is the most influential Jew who ever lived. Find out why more than two billion people from around the world have connected to the God of Israel through Him.

And then, talk to those funny evangelical Christian friends you have who believe that God brought the Jewish people back to the land. Maybe they see something in the Scriptures more than you do. There is more to life than living out the American dream.