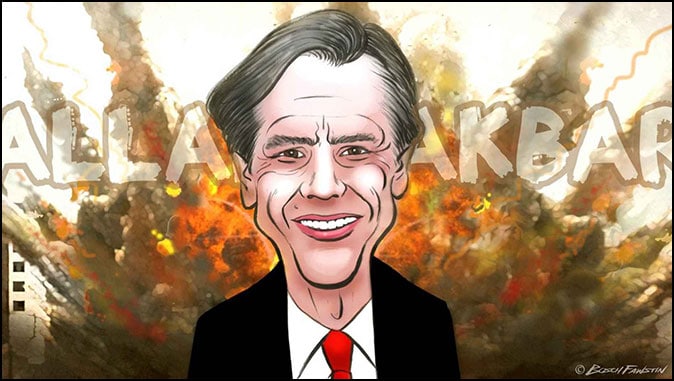 Impeach Secretary of State Antony Blinken
The hack at the heart of the Afghanistan betrayal must go!
By Daniel Greenfield

The Clinton administration was very surprised by the Taliban in 1996. A memo from the State Department’s Afghanistan office warning that the Taliban were going to take Kabul never reached Secretary of State Warren Christopher. Nine days later, the Taliban were in charge.

History repeated itself when 23 staffers at the U.S. Embassy in Kabul signed a memo warning that the Taliban were about to take over Kabul and that evacuations needed to begin. The date was July 13, 2021. There was still a month left until the Taliban would enter Kabul. And that should have been plenty of time to conduct an evacuation and get American civilians safely out.

Secretary of State Antony Blinken, unlike Christopher, did see the memo. But it contradicted the narrative that he and the rest of the Biden administration had been peddling to the public.

“No one, starting with the Taliban, has an interest in going back to a civil war, because I think what everyone recognizes is there’s no military resolution to the conflict,” Blinken absurdly told ABC News in April after his boss had announced the disastrous retreat from Afghanistan.

The Taliban not only believed that there was a military resolution, they were winning it.

Weeks after the memo, Blinken was still insisting, all evidence to the contrary, that, “No one has an interest in a military takeover of the country by the Taliban, the restoration of an Islamic emirate.”

After China’s Foreign Minister Wang Yi met with Taliban leader Mullah Abdul Ghani Baradar, praised the Taliban as a “a pivotal military and political force”, and mocked the United States, Blinken responded by celebrating Communist China’s involvement. “If China and other countries are working on that interest, then it’s a positive thing,” he suggested.

Blinken’s insistence that China didn’t want a Taliban takeover was as treasonously wrongheaded as his parallel narrative that the Taliban weren’t really trying to win a war.

The memo from Kabul was dismissed because it contradicted Blinken and Biden’s narrative.

Blinken’s commitment to this imaginary government was so total that he had agreed to provide the collapsing Afghan government with a bulk shipment of dollars if it peacefully turned over control to the Taliban which would have put the money into the Islamic terror group’s hands.

It was not the first time that a Democrat administration appeared convinced that what the Taliban really wanted was international recognition, not an Islamic emirate. But the Clinton administration didn’t have the benefit of history when it made the same mistakes with the Taliban. Nor did it leave thousands of Americans trapped behind enemy lines in Kabul.

That was uniquely Blinken and Biden’s accomplishment.

Blinken’s conviction that the Taliban would settle for a peaceful solution led him to maintain a full diplomatic presence even as much of the military had pulled out. Instead of urgently trying to get Americans out of the country before it was too late, the State Department created the illusion of normalcy by acting as if the conflict wouldn’t reach the cities, let alone penetrate Kabul.

The Taliban, Blinken and his people kept insisting, would stop the fighting and negotiate.

Military officials had wanted to plan for the emergency evacuation of the embassy, but the Biden administration refused. Blinken’s State Department meanwhile kept an embassy with over 1,000 Americans running in the heart of a city due to fall to the enemy. That was when the memo warning about an imminent Taliban takeover was sent. But only ten days before the fall of Kabul, did the Biden administration finally discuss whether to evacuate the embassy.

And only days before the fall of Kabul was a military evacuation finally authorized.

It didn’t take a memo to warn Blinken what was going to happen. As the Washington Post noted, “On Sept. 27, 1996, Taliban forces captured Kabul overnight, flooding in from all directions after a 15-day sweep of the country.” The possibility that the Taliban would quickly take over the country was not only there, it had already happened while Blinken was serving on Clinton’s National Security Council. And yet Blinken had learned nothing from the experience.

In June, as the Taliban conquest was well underway, Blinken testified in Congress that a quick collapse would not happen. “If there is a significant deterioration in security, that could well happen – we have discussed this before. I do not think it is going to be something that happens from a Friday to a Monday,” he had argued. It turned out to be a Thursday to a Sunday.

Days before the evacuation, State Department spokesman Ned Price had declared, “Let me be very clear about this: The embassy remains open.”

Despite the lessons of history and warnings from Kabul, Blinken was completely unready for the collapse and the evacuation of Americans. The Contingency and Crisis Response Bureau created under President Trump for just such a crisis had even been shuttered in June.

Diplomats who fled the country said that an earlier evacuation could have averted Blinken’s disaster.

Blinken played a key role in the disaster by clinging to an imaginary diplomatic solution with terrorists, ultimately endangering Americans, costing American lives, and humiliating America.

But Biden brought in Blinken because he was a reliable rubber stamp for terrible policies. Afghanistan proved to be a rerun of Blinken’s disastrous mishandling of Obama’s withdrawal from Iraq which had allowed the country to fall into the hands of Iran and ISIS.

A few months after Obama’s Iraq pullout, Blinken had insisted that, “What’s beyond debate is that Iraq today is less violent, more democratic and more prosperous–and the United States more deeply engaged there–than at any time in recent history.” That summer, ISIS began the first wave of attacks that would put it on the path to declaring a caliphate.

Long before Blinken was pushing an alternate reality from Afghanistan, he was trying to sell an imaginary Iraq in which “violence has declined and remains at historic lows”, where predictions of sectarian war “proved wrong” and whose government would not be under Iranian influence.

In Afghanistan or Iraq, Blinken’s first priority was peddling a phony administration narrative. In Iraq, it led to the rise of ISIS, and in Afghanistan, to the Taliban takeover of the country.

While lying to Americans about the consequences of Biden’s retreat in Afghanistan, Blinken falsely claimed that, “The terrorism threat has moved to other places.” 13 dead American military personnel and the resurgence of Al Qaeda and ISIS-K in Afghanistan prove otherwise.

The “Taliban is also committed not to allow al-Qaeda or other terrorist groups that might target the United States to re-emerge,” Blinken had claimed. The Haqqani Network and other Taliban leaders allied with Al Qaeda have become part of the new Taliban government ruling the country. Blinken and his boss turned over Afghanistan to Al Qaeda’s allies in time for the anniversary of September 11. And they did it by telling outrageous lies about the consequences.

Blinken, more than any single administration figure, was the hack at the heart of the Biden betrayal which abandoned Americans and their allies to the enemies of our nation.

Secretary of State Antony Blinken should never have been nominated or confirmed to his current role. Now that the Taliban have taken Afghanistan, 13 Americans are dead, and our international stature is shattered and ruined, he should be impeached and removed.

After lying about Iraq and Afghanistan with horrifying results, what will Blinken lie about next? As the United States faces confrontations with China and Iran, it cannot afford to have a liar who wrecked our national security and empowered terrorists heading up our foreign policy.