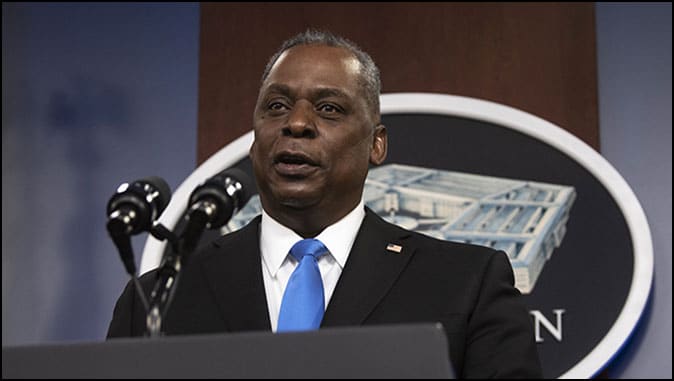 Impeach Secretary of Defense Lloyd Austin
Instead of fighting the enemy, he was fighting Americans.
By Daniel Greenfield

Americans are dead and our credibility is in ruins. Meanwhile the man at the top of the military chain of command is blaming everyone else while using the dead for political cover.

When Secretary of Defense Lloyd J. Austin III appeared before the Senate Armed Services Committee, he suggested that any criticism of his disaster in Afghanistan would impugn the heroism of American soldiers who fought and died in the war. It was a shameless performance in which Austin blamed everyone else while using the soldiers he sacrificed as human shields.

Indian intelligence sources revealed that the ISIS-K suicide bomber who murdered 13 American military personnel at the Kabul airport had been released from Bagram Air Base by the Taliban.

The decision to pull out of Bagram had been reached at a secret meeting in the Pentagon’s “extreme basement” attended by Austin, Gen. Milley, and Secretary of State Blinken.

Any final decision would have had to be signed off by Biden and by Austin.

It’s understandable that Austin keeps coming up with excuses for the disaster that led to the death of more American personnel in one day than in the last two years of war in Afghanistan.

Austin is at the top of the military chain of command and answers only to the man in the Oval Office. No one is more responsible for the military disaster in Afghanistan than Austin except for the man who gave him his orders. But it was Austin who promised Senate members that if he were confirmed, he would speak his mind and stand up to Joe Biden.

“I certainly wouldn’t be here if I believed the last four years of my life left me too familiar with current operations to change course when needed, too close to scrutinize people with whom I once served, or too afraid to speak my mind to you or to the President,” Austin had assured the Senate Armed Service Committee during his confirmation hearing.

It was one of the many broken promises that Austin left in his wake during his brief tenure. The Secretary of Defense had promised to end the war in Afghanistan “on terms favorable to the United States”, had assured that, “Afghan security forces have the capability and capacity to project security and stability in Afghanistan in 2021 and beyond”, and that he would work to “ensure that the U.S. military and our Afghan partners have the capacity and capability necessary to protect U.S. personnel, our allies and partners, and our interests.”

Austin vowed to represent national interests, to be independent and flexible, and to keep American soldiers and civilians in Afghanistan and in the United States safe.

As the Afghanistan disaster unfolded, Austin showed off all of his abandoned promises.

He explained that he could not rescue the Americans trapped behind enemy lines. “I don’t have the capability to go out and extend operations currently into Kabul.” Austin acknowledged that Americans were being assaulted by the Taliban. “We’re also aware that some people, including Americans, have been harassed and even beaten by the Taliban.” he admitted, but all he had to offer was a protest that he had registered with “the designated Taliban leader.”

In eight months under Austin’s leadership, U.S. military forces had gone from a dominant force to being unable to stop the Taliban from beating Americans in the streets of Kabul.

This disgraceful betrayal was implemented by Secretary of Defense Lloyd Austin.

No single military figure had done as much to radicalize the military, undermine military readiness, shatter international alliances, and destroy America’s credibility abroad.

Austin’s opening statement at his confirmation hearing made no mention of Afghanistan or the Taliban, or even Al Qaeda, ISIS, and terrorism. Instead he vowed to fight the “enemies” that “lie within our own ranks” and “rid our ranks of racists and extremists” by which he meant anyone who wasn’t on board with critical race theory and the rest of his radical leftist agenda.

In February, Austin held his first press conference at which he discussed the Biden administration’s illegal military occupation of Washington D.C. He also mentioned that, “I told our allies that no matter what the outcome of our review, the United States will not undertake a hasty or disorderly withdrawal from Afghanistan.”

NATO allies were promised that, “There will be no surprises. We will consult each other, consult together and decide together and act together.” As the British and other NATO allies have made clear, there was no consultation and there were no joint decisions. Instead Biden and Austin made disastrous unilateral moves while leaving the nations that had aided us holding the bag.

But Austin was spending far more time fighting conservatives in the military than fighting the enemy. While white personnel were being told that they were oppressors, and minority personnel were encouraged to believe that they were victims of white racism, the planning for a full evacuation from Afghanistan was being pushed off as it was an unimportant matter.

Defense Secretary Austin kept sloganeering about “a responsible and sustainable end to this war” and promised, “we want to do this methodically and deliberately”. Instead, he abandoned Bagram Air Base, cutting off the only safe evacuation route, and pulled all but 600 military personnel out, only to rush troops back at the last minute for a “hasty” and “disorderly withdrawal”.

Austin had also promised that U.S. military weapons wouldn’t fall into the hands of the Taliban.

“We’re going to responsibly retrograde all of our capabilities,” Austin had falsely promised. “We’re going to account for all the people and resources that are working with us.”

Instead, Austin left the Taliban as the best armed Sunni Jihadist group on the planet.

While Austin was vowing to fight all the “racists and extremists” in the military, he was ignoring a report to the Pentagon’s Inspector General which warned that “Al Qaeda is gaining strength in Afghanistan while continuing to operate with the Taliban under the Taliban’s protection” and that “Al Qaeda capitalizes on its relationship with the Taliban through its network of mentors and advisers who are embedded with the Taliban, providing advice, guidance, and financial support.”

Al Qaeda functioned in relation to the Taliban the way that America did to the Afghan government as an embedded supportive force providing money and strategic insights. The Taliban had not only failed to turn on Al Qaeda, but the terrorist group that had attacked America on September 11 was playing the role of the wizards behind the Taliban curtain.

In response to Senate questions, Austin wrote that the “Taliban have agreed to take concrete steps to ensure that al Qaeda never again is able to use Afghanistan’s soil to threaten the security of the United States or our allies. If confirmed, I will review the Taliban’s progress toward implementing their commitments with regard to al Qaeda.”

The Taliban implemented their commitments to Al Qaeda, not to Austin. The Haqqani Network, longtime Al Qaeda allies, control Kabul and the terrorist group freely operates in Afghanistan.

“We are committed to a responsible and sustainable end to this war while preventing Afghanistan from becoming a safe haven for terrorist groups that threaten the interest of the United States and our allies,” Austin had said. But the report to the Pentagon IG had already made it clear that Taliban control over Afghanistan would mean the return of Al Qaeda.

What happened wasn’t a surprise, it was inevitable.

“The whole community is kind of watching to see what happens and whether or not al Qaeda has the ability to regenerate in Afghanistan,” Austin told reporters during his post-defeat tour.

As usual, he was late to the party.

“We put the Taliban on notice that we expect them to not allow that to happen,” he said, referring to Al Qaeda using Afghanistan to launch attacks against the United States. The “notice” will be as effective as the one about the Taliban beating Americans at checkpoints.

But Austin had made it his priority to use the military against fellow Americans, whether in Washington D.C. or within the ranks of the military, while betraying Americans to the Taliban.

“This all occurred in a span of about 11 days. Nobody predicted that, you know, the government would fall in 11 days,” Austin whined during an ABC News interview.

Every Biden administration official had latched on the same dishonest talking point.

As the Washington Post noted, “On Sept. 27, 1996, Taliban forces captured Kabul overnight, flooding in from all directions after a 15-day sweep of the country.” There were plenty of intelligence estimates warning of a rapid Taliban takeover. But Austin didn’t have to wait until there were only 11 days left. What was he doing since Kamala Harris swore him in on Jan 25?

Where were all those “responsible” and “methodical” plans he had been promising all along?

Instead of planning how to keep Americans safe, Austin spent those months waging war on Americans with a militarization of Washington D.C. and with a purge of the military. And when 13 American military personnel died because of his actions at the Kabul airport, the dead heroes proved to be men and women, white and Latino, who represented the spectrum that Austin was trying to divide with the big lies of critical race theory and a hunt for “extremists”.

The real extremists were Austin, Milley, and Biden.

Like most leftists, Secretary of Defense Austin could not take the idea of an external enemy seriously. Radicals striving to take power focus all their efforts on fighting internal enemies. And while Austin fought other Americans, Al Qaeda and the Taliban claimed Afghanistan.

Along with untold billions in military equipment, including Black Hawk helicopters, drones, armored vehicles, and a treasure trove of assault rifles and heavy weaponry.

On his post-defeat tour, Austin has claimed that the disaster, “will be studied in the days and months ahead”, and admitted that, “No operation is ever perfect, there are lessons to be learned.” What those lessons are, he hasn’t bothered sharing with the rest of the country.

Austin may not be especially bright, but he is a career military man who reached the pinnacle of his profession. He knew that the Afghanistan withdrawal would be a disaster and that is why he reportedly advised Biden to conduct it in stages, instead of in one fell swoop. Biden ignored his advice and Austin shrugged because he didn’t care about Afghanistan, he cared about “racism”.

The real lesson here is on the dangers of putting radicals with racial grudges in charge of the United States military. The Afghanistan rout was not an unexpected surprise, it was the cumulative effect of radicalism, incompetence, and apathy by a politicized and disloyal brass.

While Austin was fighting enemies at home, he enabled enemies abroad. He made fellow American military personnel into his enemies and they died at the hands of true enemies.

The betrayal in Afghanistan began with a betrayal at home.

The American Experiment By Dr. Jerry Newcombe Is the Biden administration governing in a way…

Iranian Terror Group Protected by Biden Aided Him in 2020 Election

Sex, Lies, and Sweet Book Deals A damning - and revolting - report comes out…