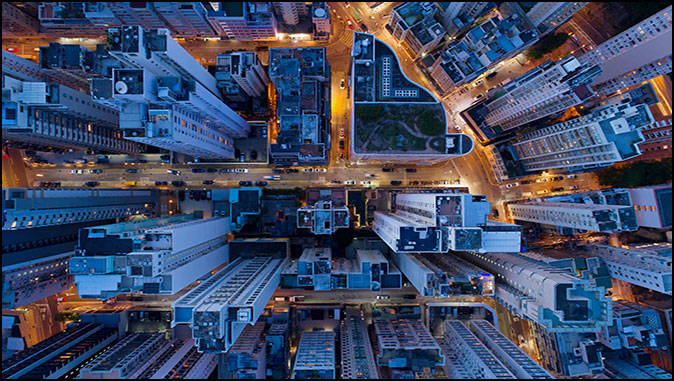 Imagine No Big Cities
Are we better off without them?
By Dennis Prager

Well, here’s my (much shorter) version.

Imagine if some of the biggest cities in America seceded from their states. Imagine Illinois without Chicago, Pennsylvania without Philadelphia, California without Los Angeles or San Francisco, New York state without New York City, or Texas without Houston, Dallas or San Antonio.

Those states would lose a major tax base and some of their best orchestras and other artistic institutions. But the gains in quality of life would completely offset any financial or artistic losses.

Big cities have been and continue to be centers of destructive ideas, and the people living in them are generally coarser and often just plain meaner. Of course, there are decent individuals in big cities and obnoxious people outside of big cities. But having a greater proportion of nice to obnoxious is more likely in smaller cities and other nonurban areas. Everyone reading this knows that one is more likely to be treated warmly when entering a store or dining in a restaurant in Cooperstown, New York, than in Brooklyn, New York; in Laramie, Wyoming, than in Philadelphia, Pennsylvania.

The list of differences between the Laramies of America and the big cities of America is long indeed. A study by the University of Indiana Center on Philanthropy concluded, “Rural donors donated a statistically significant higher percentage of their income to charity than urban donors did.”

It is not surprising that so many of Israel’s great prophets were shepherds, the most rural of folk. Moses, the man who brought the world the Ten Commandments, the most influential moral code in history, was a shepherd. Rutgers University professor Leonardo Vazquez wrote that the American founder, Thomas Jefferson, “was of one mind about cities: he hated them … “Though Jefferson partied in Paris and had a hand in shaping Washington, D.C., he thought cities were dens of corruption and iniquity that would spoil the young American republic.”

Hitler learned his antisemitism in Vienna; Marx spent his adult life in London, writing his totalitarian tomes at the London Library; Pol Pot, the genocidal butcher of Cambodia, became a committed communist in Paris; Lenin engaged in his Marxist activities in St. Petersburg, Munich, London and Geneva; Stalin, born in Georgia, rose to prominence in Georgia’s largest city, its capital, Tbilisi, and spent the rest of his life in St. Petersburg and Moscow.

The idea that the city is a source of evil is ancient. The first city ever built is attributed to Cain, the first murderer in the Bible (Genesis 4:17). The Book of Genesis contains the famous story of the Tower of Babel, a tower built to reach as high as the heavens in order, Genesis tells us, “to make the builders famous.” What is less well known is that every time the Bible mentions the Tower, it mentions “the city” built alongside it: “And they said, ‘Come let us build a city and a tower with its top in the sky.'” (Genesis 11:4).

The biblical scholar Patrick D. Miller, Professor Emeritus of Old Testament Theology at Princeton Theological Seminary, wrote that the story should more properly be captioned “The City of Babel,” not “The Tower of Babel.” Another scholar, professor Robert Alter of the University of California, Berkeley, wrote: “The polemic thrust of the story is against urbanism … ”

And the paradigmatic biblical places of evil are cities: Sodom and Gomorrah.

Why are cities dens of iniquity and incubators of destructive ideas?

One answer to the first question is anonymity: the bigger the city, the more anonymous the individual. People behave much better when they are known to their neighbors. Just think how much better people act when they wear an ID, as they do, for example, when attending a convention.

And just as we are more anonymous in a city, so is everyone else. People feel responsible to treat those they know better than they do anonymous strangers.

As for moronic ideas, rural people get meaning out of working with their hands and interacting with nature, which grounds them in reality and imposes pragmatism, while urban people are far more likely to get meaning, along with no consequences, from working with abstract ideas. Hence, the urban intellectual is so often a fool. Had Karl Marx been a farmer, the world might have been spared the unprecedented mass persecution and murder brought about by Marxist ideas. But Marx was the classic urban intellectual, never doing a day’s worth of labor while writing about the proletariat.

It makes perfect sense, then, that our states would be far better without their biggest cities. I didn’t say it was practical. But it’s worth imagining.