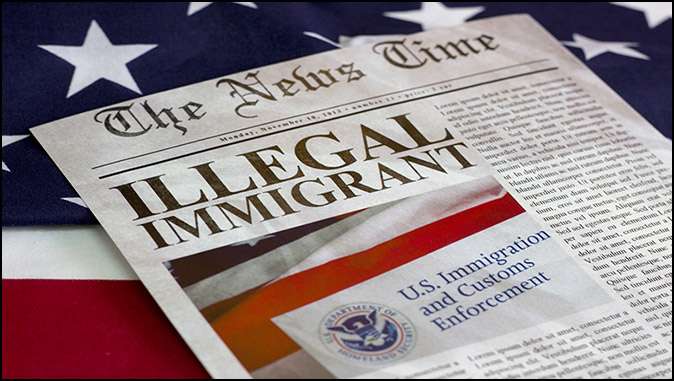 Illegal Immigration Reaches a Point of No Return
It’s going to take a lot more than two Republican governors to put this genie back in the bottle.
By Will Alexander

Only in the twisted minds of opportunistic political zombies is busing 50 “migrants” from Texas to ritzy Martha’s Vineyard “grotesque,” “inhumane,” “kidnapping,” and “literally human trafficking” as Hillary Clinton put it.

“I happen to believe, still, the majority of Americans are good-hearted and generous and when people end up on their doorstep in need, they’re going to respond,” Clinton smilingly told Joe Scarborough, calling Gov. DeSantis’ move “inhumane, terrible treatment” of human beings. “They’re [Americans] going to feed them and house them and the kids in the AP Spanish class will be let out of high school so they can go and translate,” she said.

After The View’s Sunny Hostin, a lawyer, said that seeking asylum is legal in the United States and that “It is your right to do it when you get here,” Whoopi Goldberg compared illegals breaching the Mexican border to people who “come through the border from Canada.”

“I love Canadians, don’t get me wrong, OK,” Goldberg said. “My point is because it’s been made into a brown people issue, it’s a problem.”

In the minds of these liberals and Democrats, the border issue has already reached a point of no return.

In the face of epidemic fentanyl deaths, vaccine injuries reaching into the tens of thousands, inflation skyrocketing, violent crime off the charts, mobs threatening Supreme Court judges, and as more than two million illegals, and counting, stream across the border – liberals and leftists screamed the loudest, last week, about 50 migrants desecrating Martha’s Vineyard.

Democrats haven’t always been so reckless. Not too long ago, illegal immigration was a no-brainer.

Hillary Clinton belched in 2003, “I am adamantly against illegal immigration.”

Speedy deportations were part of the recommendations that the U.S. Commission on Immigration Reform, chaired by Congresswoman Barbara Jordan (D-Texas), gave President Clinton that same year.

After massive research and investigations, Jordan’s team found it vital to the national interest not only to restrict illegal, but legal immigration.

Today, illegal immigration has not only become accepted, but institutionalized. Seeing a rich, liberal enclave like Martha’s Vineyard summon the National Guard and kick out 50 “migrants” in a little more than a day, was a marvel to behold. And rare. Good for them. But the poor and middle-class who live in woke Democrat cities aren’t so fortunate. They either have to suffer or move.

My oldest daughter, who lived in Los Angeles for years, saw a point of no return for that city in 2019.

In utter frustration, she texted me videos of illegals camped outside her apartment. It was shocking. Clusters of illegals lined the streets camped on blankets that formed the property lines for slipshod sidewalk “storefronts.”

Shopping carts were wrapped in aluminum foil to grill and sell food. One man heaped stacks of crawdads inside a baby carriage without ice or refrigeration. Another one sold piles of chili peppers sprawled on the bare sidewalk under a rickety table.

Los Angeles Mayor Eric Garcetti ordered police to do nothing.

“They are above the law,” my daughter wrote. “How can you sell so much food on the street without a permit? Without the grading system? I didn’t know you could have a business and not pay taxes. … This! Is! Their! Country!!! The situation in LA is unbearable.”

Those who choose to live in the city scream into political oblivion against illegal immigration. Their voices are heard loud and clear, then ignored.

One black man wearing a MAGA cap told county leaders back in 2017 in a meeting to consider SB-54, California’s sanctuary state bill, that things have become so unbearable that he’s ready to take the law into his own hands.

SB-54, which eventually passed and went into effect in 2018, forbade local and state law enforcement to cooperate with federal immigration authorities.

“Make California Great Again!” the man yelled at the meeting. “We gonna handle this! If you guys don’t, I will! And if Mr. Trump would have lost, I would have organized some brothers, and we [would] put all your asses under…citizen’s arrest (pointing to a group of pro-illegal immigrant protesters).”

Unlike Martha’s Vineyard, no one with power to effect change, at the time, spoke for frustrated Americans, except Donald Trump.

But even as the country’s chief law enforcer, Trump was viciously opposed by Democrat and leftist politicians who exerted their full powers into doing nothing. They didn’t want to stop illegals, they wanted to stop Trump.

But Trump took the drastic step of threatening tariffs, forcing Mexico to agree, among other things, to send 6,000 of its National Guard troops to the Guatemalan border to curb the flow of illegal entry. He also asked Mexico to disrupt migrant bus routes and designate itself a third safe country so asylum-seekers’ journey could end there.

It worked – until Joe Biden and Democrats, out of political hatred, dismantled it all, with nothing to replace it.

With the deliberate blurring of the lines between legal and illegal immigration, the erosion of bipartisan political will to enforce the law, and millions of illegals fanned out into communities, likely, in every state, it’s going to take a lot more than two Republican governors “pulling political stunts” to put this genie back in the bottle.

Along with defunding the police and so many crazy things, without drastic, unapologetic pushback before the midterm elections and beyond, it’s hard not to agree with Thomas Sowell, who told Mark Levin in 2020 that America could reach a point of no return.

“I hope, of course, that will never happen,” Sowell said, “but there is a such a thing as a point of no return. … The Roman Empire overcame many problems in its long history, but eventually it reached a point where it simply could no longer continue on. And much of that was from within, not just the barbarians attacking from outside.”