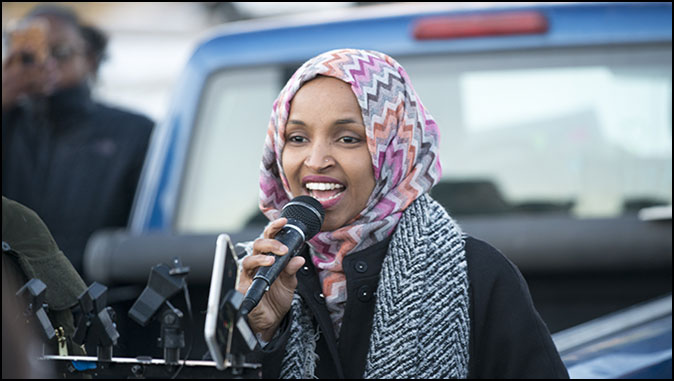 Ilhan Omar’s ‘Islamophobia’ Bill Passes
What will happen to opposition to Jihad and Sharia?
By Robert Spencer

On a party-line 219 to 212 vote, the House on Tuesday passed the Combating International Islamophobia Act, which is co-sponsored by Rep. Ilhan Omar (D-Mogadishu). The bill calls upon the president to appoint a “special envoy” to fight “Islamophobia”; this envoy will head up a State Department that will monitor the phenomenon. Omar’s bill, however, is wrongly focused in all kinds of ways, not least of which is the fact that it will combat efforts to “promote racial hatred” against Muslims, even though Islam is not a race and there are Muslims among people of all races. Meanwhile, the raucous House debate raised other problems with the bill as well, including the likelihood that it will inhibit counterterror efforts.

“The office,” says the Washington Post, “would record instances of Islamophobia, including violence against and harassment of Muslims and vandalism of their mosques, schools and cemeteries worldwide, in reports created by the State Department.” That’s fine, although it’s striking that there is no similar call for the State Department to create reports about violence against and harassment of Christians and vandalism of their churches, schools, and cemeteries worldwide, or violence against Hindus or any other religious group. Why the special treatment for Muslims? It can’t be because Muslims are uniquely the victims of persecution around the world; Christians are by far the most persecuted religious group.

Rep. Michael McCaul (R-Texas) noted this, saying: “This word appears nowhere in the federal statutes,” and that the bill “prioritizes the religious persecution of Muslims over the persecution of other religions.”

Of even greater concern, however, is that the new “Islamophobia” office would target “propaganda efforts by state and nonstate media ‘to promote racial hatred or incite acts of violence against Muslim people.’” As noted above, Islam is not a race, so “racial hatred” against Muslim people is not even possible. But if the way that the word “Islamophobia” has been used up to now is any indication, what is considered to be propaganda or incitement will be based entirely on subjective criteria, and include even reporting about jihad activity and honest analysis of its motivating ideology.

McCaul noted this as well: “It is so vague and subjective that it could be used against legitimate speech for partisan purposes. Even the term ‘phobia’ [connotes] irrational fear, not discrimination.”

Rep. Scott Perry (R-Pennsylvania) also warned that the bill would be used “to silence dissent and critiques of terrorism.” He added: “By intentionally leaving the definition of ‘Islamophobia’ blank in this bill, the gentlelady and my friends on the other side of the aisle are creating an office in our State Department that will likely spew antisemitic hatred and attack Western ideas throughout the world under the farce of protecting Islam.” Indeed.

Perry is under fire for “baselessly” and “falsely” claiming that “Omar is an associate of terrorists” – or at least that’s how the Washington Post reported it. This, however, is what Perry actually said: “We all agree that nobody should be persecuted based on their faith. We all agree on that. But American taxpayers shouldn’t be forced to pay terrorist organizations, organizations that the maker of this bill is affiliated with like the one that’s an unindicted co-conspirator in the largest terror finance case in the United State of America’s history.”

No one in the establishment media seems to have picked up on it, but Perry here was clearly referring to the Council on American-Islamic Relations (CAIR), which is indeed an unindicted co-conspirator in a Hamas terror funding case, so named by the Justice Department. CAIR officials have repeatedly refused to denounce Hamas and Hizballah as terrorist groups. Several former CAIR officials have been convicted of various crimes related to jihad terror. CAIR’s cofounder and longtime Board chairman (Omar Ahmad), as well as its chief spokesman (Ibrahim Hooper), have made Islamic supremacist statements about how Islamic law should be imposed in the U.S. (Ahmad denies this, but the original reporter stands by her story.) CAIR chapters frequently distribute pamphlets telling Muslims not to cooperate with law enforcement. CAIR has opposed virtually every anti-terror measure that has been proposed or implemented and has been declared a terror organization by the United Arab Emirates. CAIR’s Hussam Ayloush in 2017 called for the overthrow of the U.S. government. CAIR’s national outreach manager is an open supporter of Hamas.

What’s more, the United Arab Emirates named CAIR a terror organization in 2014. Ilhan Omar has been a featured speaker at CAIR events. So Perry was correct, but is predictably being smeared as falsely accusing Omar.

Rep. Beth Van Duyne (R-Texas) got to the heart of the matter: “This bill brought to the floor today is for one purpose only: to appease the hurt feelings of members who themselves have well-documented backgrounds of anti-American and antisemitic remarks.” Right. No one is talking anymore about Omar’s well-documented anti-Americanism or anti-Semitism. She has successfully played the victim card and shifted the focus of the public debate. We will be seeing a great deal more of this strategy in the near future, and why not? It obviously works.