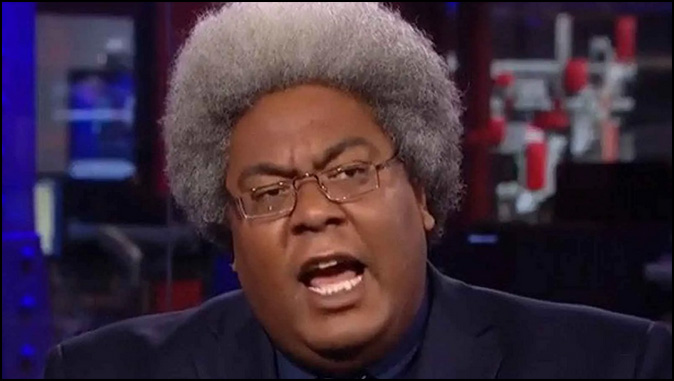 Idiot Grandson of Haitian General Explains Why He Hates the Constitution
A guide to the unconstitutional ignorance of Elie Mystal.
By Daniel Greenfield

Elie Mystal, the grandson of a Haitian general and the son of a lying politician, made headlines when he told the fellow constitutional scholars of The View, that the Constitution is “trash”.

The idiot racist son of a Haitian immigrant, whose gratitude for the country that took in his worthless family is only matched by his aptitude for wearing his hair like it was just caught in an exploding vacuum cleaner, was on tour to promote his book, Allow Me to Retort: A Black Guy’s Guide to the Constitution, by insulting the document that allows him to do so.

Despite (or because of) a degree from Harvard Law, Mystal can barely spell “Constitution”.

That hasn’t stopped MSNBC from having him on every 5 minutes to offer deep thoughts on how everything is racist, the Founding Fathers were dumb and the Constitution is terrible.

In his book, which seems to have been researched by reading random tweets, Mystal claims that our “current interpretation of the Second Amendment was invented by the National Rifle Association in the 1970s” because in “the 1960s, Republicans were all about gun control, because in the 1960s Black people thought that they should start carrying guns.”

It’s understandable that Mystal, whose father had just arrived from Haiti on a soccer scholarship in the sixties, knows nothing about American history. If you believe Mystal, the right to bear arms was something Republicans came up with in the sixties because they hated black people.

The exciting new systemic racism theory of history, propounded by racial revisionists like Mystal, the 1619 Project’s Nikole Hannah-Jones, Ibram X. Kendi and Louis Farrakhan, sees all of American history as being defined by a vast and endless conspiracy against black people

Gun control was always a Democrat project dating back to FDR’s New Deal for Crime. The National Firearms Act was enacted in 1934 as a result of a series of measures introduced by House and Senate Democrats. It was opposed by Republicans and moderate Democrats who managed to block FDR’s push for a national gun registry. This wasn’t about black people, it was about white people. Especially white crooks and mobsters who were shooting up cities.

Elie Mystal’s worldview revolves around race which he uses to comment on the law and on history without ever knowing anything except that he’s a victim on account of his race.

“White neo-Confederates love to point out that ‘slavery’ was practiced throughout much of the world, throughout much of human history, but this idea that slavery was a condition you could inherit from birth was not common in ancient slave-loving Rome or other slave-based societies. That idea was market-tested and industrialized in the New World,” Mystal stupidly claims.

Mystal could actually visit the African country of Mali where Tuaregs still practice hereditary slavery today. Descent-based slavery is not at all unusual in the Islamic parts of Africa where non-Muslims were considered subhuman and fit for little more than slavery or death.

But Mystal is partly right only because most slaves in Sub-Saharan Africa were women. That’s not the compelling argument for abortion that he seems to think it is in his feminist chapter, but Mystal’s idea of a compelling argument is shouting, “Racist, Sexist, Homophobe” three times.

What do you do when you don’t actually know anything? You become a legal correspondent for The Nation and go on The View to push your book about how dumb the Constitution is.

“The way that voting rights have been couched as ‘We will not abridge the right to vote’ as opposed to ‘You have a positive right to vote,’ that’s dumb,” Mystal stupidly insists.

Like a petulant teenager, he keeps calling things dumb because he doesn’t understand them.

“I’m prejudiced against dumb people,” Mystal declares in a burst of unintentional self-hatred.

Mystal defends the absurd idea that cruel and unusual punishment can be used to ban the death penalty by asserting that, “It makes no sense to have a legal definition of cruel centered upon what some eighteenth-century a______s thought that word should mean.”

That is what Mystal’s arguments always come down to. Everyone who disagrees with him is dumb. Everything he disagrees with is stupid. The stupidity is real, but it’s coming from inside the house.

At one point, Mystal actually cries sexism because “the framers of the Constitution provided no social safety net whatsoever for widows and orphans.” That would be an understandable objection if it were coming from an illiterate Swedish goatherd who has no idea what is in the Constitution. Instead it’s coming from a graduate of Harvard Law who, presumably, at some point has read the Constitution or at least googled a quick summary of it on Wikipedia.

That might be optimistic when coming from a guy whose legal education included, “being in office hours with Elena Kagan (I had her for CivPro) and asking why I should give a rat’s ass (I’m paraphrasing) about what some dead, probably racist, white man said.”

So of course Mystal can be counted on to go on MSNBC and rant that, “The founding fathers didn’t recognize abortion as a fundamental right because the founding fathers were racist misogynist jerk faces who didn’t believe that women had any rights at all!”

The Founding Fathers had not considered the idea of licensing anyone, regardless of their gender, to kill babies. They were too busy building a country by the skin of their teeth.

Mystal’s only legal theories are racism and name calling. And he isn’t very good at either one of. Compare calling the Founding Fathers “racist misogynist jerk faces” to Benjamin Franklin’s “Trickery and treachery are the practices of fools that have not wits enough to be honest”.

“You come out as a Republican, I’m prejudiced against you. I assume you’re defective, in some way. I wouldn’t want you to marry into my family,” Mystal sneers at one point.

Mystal’s family is Elie Mystal Sr, a Haitian immigrant who became an aide, chief of staff, and apparently the boyfriend of a dying white councilwoman in Long Island, New York. (A New York Times story on her death from what some people confused with mad cow disease refers to him as a “companion” and to them as a “couple”.)

After she died, he “inherited” her job, but ran into a problem when it turned out he was living in Palm Beach Gardens, Florida. He got 5 years probation and had to pay $84,300.

“I could describe my late father’s profession in a lot of ways, but ‘a gerrymanderer’ would be among the most accurate,” Mystal admits at one point.

It’s no surprise that Mystal has said that, “I figured I’d run for office or, worst case, be the press secretary for somebody running for President. I never wanted to be a lawyer, especially when I was actually a lawyer” and “I decided on law school strictly as a stepping stone towards an elected future.” It’s hard to know whether Mystal’s entitlement outweighs his ignorance.

Or whether it’s a close race.

The grandson of a Haitian general and the son of a New York politician, who boasts of having gotten into nearly every school he applied to, whines that he is, “supposed to stop and consider the class status of discrete and insular white people living in Appalachia.”

It’s pretty obvious who’s “trash” and it’s not the Constitution.