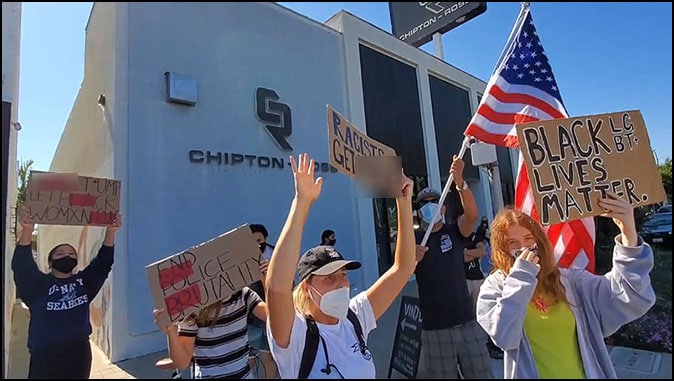 MassResistance: How to deal with left-wing “counter-protesters” who come and harass pro-family demonstrations and events
By MassResistance

Keep in mind: They are really just hateful cowards and usually back down. See video below!

These Black Lives Matter activists thought they would intimidate our rally. But it didn’t work out that way! Note one of our people in back with American flag.

It’s becomingly frighteningly commonplace. Our side will hold a demonstration, or a rally, or even host a speech. A group of leftists – including BLM or Antifa types, LGBT activists, or others – will find out about it and show up to intimidate the participants, or even disrupt the event, often with angry and profane signs and shouting.

Conservatives often react by trying to ignore them. But generally, the radicals pretty much accomplish their goal of intimidating people and causing some level of disruption.

Conservatives tend to look at them as simply “people like us” who have a different opinion, and maybe get carried away a bit.

MassResistance takes a different approach. First of all, we see these people for what they really are: dysfunctional on some level. They are hateful and angry. Their seemingly unhinged venom and profanity are a projection of that. There’s never any “good humor” or “joking around” to be found among them. As a group, they’re pretty miserable.

And like all classic bullies, they are actually cowards inside. So they need to be treated as one would treat any bully: direct confrontation.

In the interest of enlightenment, we’ve put together a video below from this past year to illustrate our approach. The first clip in the video is from an “Anti-BLM/Pro-Police” rally we organized last summer next to the police station in El Segundo, CA. A group of Black Lives Matter activists found out about it and held a vulgar and disgusting counter-protest across the street. A few of us walked over and proceeded to ask them some pointed questions, while reminding them that “All lives matter.” You’ll see what happens!

The second clip in the video was at a sidewalk “Stop the Steal/Recall the Governor” sign-holding at a street in Torrance, CA a few months later. An angry leftist comes to scream at and intimidate us. To her shock and surprise, we confronted her and chased her away!

VIDEO: How to deal with left-wing “counter-protesters” (2 min 42 sec)

We’ve been saying for years that the Left’s wave of fear is a house of cards. Let’s all start making the house fall down!

A few more people from our rally came over to watch the fun. The lady at left (in blue) is holding her sign that says, “We love our police.”:

This angry leftist came to scream at people, but ended up getting chased away.