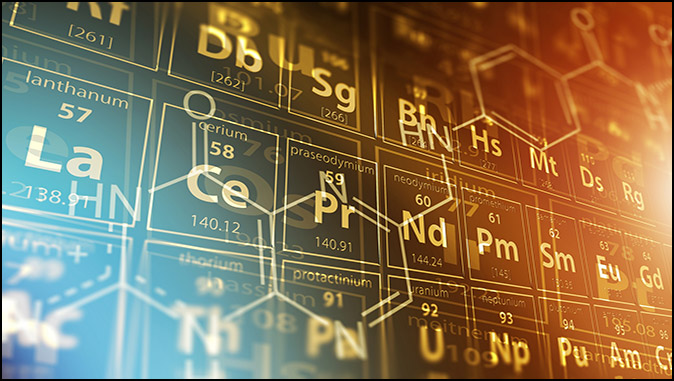 How the US Squandered Its Strategic Minerals
By Judith Bergman

“The PRC’s [Communist China’s] long-term goal,” the Pentagon wrote in 2020, “is to create an entirely self-reliant defense-industrial sector — fused with a strong civilian industrial and technology sector — that can meet the PLA’s needs for modern military capabilities.”

While China has been relentlessly pursuing self-reliance when it comes to raw materials — especially strategic ones such as titanium, tungsten and cobalt, which are used in the defense industry — the US for the past several decades has been selling off huge chunks of the strategic minerals stockpile to the extent that the National Defense Stockpile is reportedly reaching insolvency.

The National Defense Stockpile was established during World War II to ensure that the US military had critical materials necessary for its national defense, including titanium, tungsten, aluminum, and cobalt, especially in the event of a supply chain disruption. The stockpile is managed by the Defense Logistics Agency. According to Defense News:

“The stockpile was valued at nearly $42 billion in today’s dollars at its peak during the beginning of the Cold War in 1952. That value has plummeted to $888 million as of last year following decades of congressionally authorized sell-offs to private sector customers. Lawmakers anticipate the stockpile will become insolvent by FY25.”

In a bipartisan letter signed by Rep. Seth Moulton (D-Mass) and seven other members of Congress, it was pointed out how the US abandoned all caution, mindlessly selling off critical and strategic minerals:

“In the past three decades after the Cold War, Congress has authorized the sell-off of the majority of the NDS’s stockpiled materials. This has lowered the total value of the stockpiled inventory from $9.6 billion in 1989 ($21.9 billion adjusted for inflation) to $888 million in 2021. These Congressionally mandated sell-offs included: 30000 short tons of titanium, a material used for building military airframes… 76 million pounds of tungsten ores and concentrates, over 2 million pounds of tantalum…62881 short tons of aluminum, 26 million pounds of cobalt, 125138 long tons of rubber, and other stockpiled materials… And numerous other sell-offs whose receipts were deposited into the general treasury fund. The NDS is no longer capable of covering the Department of Defense’s needs for the vast majority of identified materials in the event of a supply chain disruption. Furthermore, the Department of Defense has found that the NDS Transaction Fund is approaching fiscal insolvency by FY25.”

“It was just ignorance on our part that we allowed that to happen,” Rep. Tim Burchett, R-Tenn. said. “I don’t see any other reason for it.”

By comparison, China, as of 2020, was the world’s third-largest exporter of titanium, while the US was the number one destination for the Chinese titanium exports. Similarly, China exports a large quantity of tungsten to the United States. When it comes to cobalt, in 2021 the Democratic Republic of Congo accounted for 70% of the world’s total output of cobalt, but with Chinese investors controlling a similar proportion of the cobalt production, according to The Wall Street Journal. It is China’s growing influence in Africa, especially through its Belt and Road Initiative, the global infrastructure and economic development project that the Chinese Communist Party launched in 2013, that has helped China achieve such near monopolies when it comes to precious resources and raw materials.

According to the Department of Defense, $125 million was invested into the National Defense Stockpile in 2022 and the Biden administration has proposed to spend an additional $253 million in 2023 with the goal, according to an unnamed DoD spokesperson, eventually to invest $1 billion in the stockpile. Whether that will solve the dependency issues is questionable: even after those investments, the stockpile reportedly will still be less than one-tenth its former size.

Having sold off so much of the US strategic critical mineral reserves, the US now depends on China for rare earth minerals, which are crucial for everything in the US military from F-35 fighter jets, missiles, and tanks to mobile phones and radio communication.

The rare earths dependency on China stems in part from the fact that extracting rare earth minerals is an extremely polluting process that China has been willing to undertake, while most other countries have not, including the US, which ironically prides itself on having strict environmental regulations in place. While ongoing research seeking to make the process less polluting could change that, such a change will not occur overnight. The US, according to Reuters, has only one rare earths mine and no capability to process rare earth minerals. If China were to stop exporting them to the US, the country would fast run out of the basic building blocks required to produce the military hardware that the US needs, not to mention all the other items where rare earth minerals are needed.

In February, Reuters reported that the Pentagon was planning to boost the stockpile of rare earth minerals, in addition to cobalt and lithium. The twist is that it can only do so by buying, at least in part, from China, which currently sits on 90% of the rare earth minerals supply.

Boosting the strategic mineral reserves is long overdue, but the question is whether the initiatives mentioned above will be enough at this point. China has been following a strategy of investing in strategic raw materials for decades and it seeks to dominate in the countries, especially in Africa, where those raw materials can be found. At present, 40 out of Africa’s 54 countries participate in China’s Belt and Road Initiative.

“China is dependent on Africa for imports of fossil fuels and commodities,” the US-China Economic and Security Review Commission wrote in its 2020 annual report to Congress.

“Beijing has increased its control of African commodities through strategic direct investment in oil fields, mines, and production facilities, as well as through resource-backed loans that call for in-kind payments of commodities. This control threatens the ability of U.S. companies to access key supplies.”

Seen in the light of China’s evident ambition to control critical global resources — and the strides is has made to do so, as evidenced by the US-China Economic and Security Commission — the problem that the US faces will hardly be resolved simply by increasing the budget of the National Defense Stockpile.