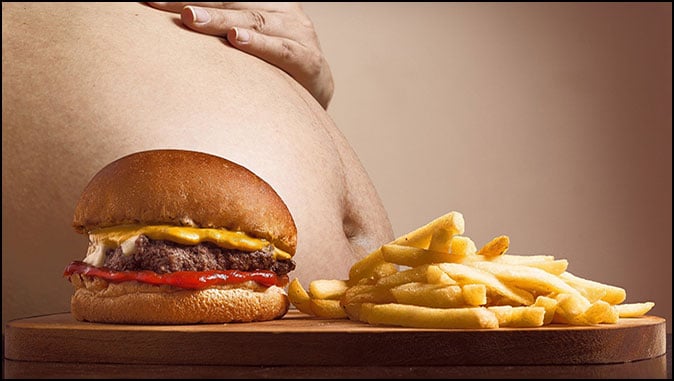 How Progressives Made America Fat
It’s not about the junk food, but the junk leftists.
By Daniel Greenfield

Mayor Michael Bloomberg’s legacy is tied up with his soda tax. The billionaire’s campaign against sweets captured the sourness of his two terms in office. While the jokes are ubiquitous, did it actually work?

Bloomberg occupied the top position in New York City government from 2002 to 2013. During that time, the New York City health department recorded that obesity rates rose from 27% to 32%.

All of Bloomberg’s anti-obesity initiatives, from the widely ridiculed bike sharing programs and bike lanes, to campaigns against snacks, soda taxes, stair mandates, and fruit markets, amounted to nil.

Some of these programs have been kept alive during the De Blasio era and all of them are useless.

That’s bad news for the UK where Prime Minister Boris Johnson has embraced the Bloomberg nanny state approach to fighting obesity by banning ads and promoting bike sharing. Bloomberg Philanthropies had spent over $100 million to export his soda tax campaign to South America.

And yet all of those “evidence-based” measures are transparently based on baseless nonsense.

Did soda ads somehow become more compelling? Had burger joints figured out a new brainwashing technique? Coca-Cola was invented in 1886. McDonald’s was established in 1940. The golden age of junk food came and went during the Cold War. Every single food trend since then has been toward less fattening and allegedly healthier foods. The same era in which obesity rates leaped saw an unprecedented explosion in everything from soy to health food supermarkets. Food is not the issue.

Or rather food is a symptom of the real issue.

These numbers also show that the attempts to medicalize racism by tying it to obesity rates are wrong. White male obesity rates are actually higher than the rates among black men. What phenomenon that transformed society between 2000 and 2017 could possibly account for such an outcome?

That wasn’t inevitable. It’s the outcome of the economic vision of the anti-obesity campaigners.

“Anybody who can go down 3,000 feet in a mine can sure as hell learn to program as well,” he declared.

The Learn to Code cliché is dumb and offensive. But going down 3,000 feet in a mine is a whole lot less likely to make you fat than maintaining a website or creating another useless zombie shooting app.

The Democrat vision for the nation’s society and economy has been to replace manual jobs with desk jobs after spending four to six years in college. Meanwhile manufacturing jobs were being exported to China. A generation of that has created unemployment, failed cities, urban riots, professional radicals, a meth epidemic, falling marriage rates, and, among many other ills, rising obesity rates.

Running our entire society through the internet hasn’t solved these problems: it worsened them.

Throwing money at nanny state programs telling people to eat more spinach or taxing their soda won’t change that. The only group where those programs have shown any results is among children. That’s because they’re children. Treating children like children works. The nanny state doesn’t work on adults.

Obesity isn’t caused by ads and it won’t be solved by nudges, green carts, or bike sharing. It’s one of the milder symptoms of a deeper social dislocation caused by the transformation of the economy.

The knee jerk leftism of political elites links obesity rates to the marketplace. It’s right about that, but its unimaginative anti-capitalism treats food as the cause of obesity, much as it treats handguns as the cause of gun violence. The root cause won’t be found on conveyor belts, store shelves or TV ads.

The political elites have reinvented America as a society that works for people like themselves.

Urban and suburban lefty college graduates with six figure salaries are building a zero-sum country that only works on their terms. That’s why their proposed solution to obesity is to convince everyone else to adopt their lifestyle of organic foods and biking to work. But their lifestyle is rooted in their culture, their living spaces, and their wealth. It’s not a solution: it is in some ways the problem.

“They were careless people, Tom and Daisy—they smashed up things and creatures and then retreated back into their money or their vast carelessness,” are the words that not only capture the privileged world of the elites of The Great Gatsby, but of our own elites who have smashed up America.

Their prescription for the country’s obesity rates echo Marie Antoinette’s apocryphal quote, “Let them eat cake.” The fictionalized queen did not understand that there wasn’t cake because there wasn’t food. The Bloombergian proposals vacillate between a similar misunderstanding about the way the people who aren’t them actually live and punitive proposals to punish them for the way that they do live.

The economy, indeed, as many lefty elites insist, doesn’t work for all us, not because of income inequality, but lifestyle inequality. Political elites are making life unworkable for people who don’t think like them, don’t live like them, and don’t want to. And those elites, like Tom and Daisy, are utterly blind to the consequences of smashing up a society and replacing it with one modeled on their lifestyles.

Learn to code is their version of let them eat cake. Followed by anxiety over the actual cake being eaten.

Since the 90s, the progressive plan envisioned eliminating manufacturing, and shoving the entire country into two tiers of desk jobs. Those in the higher tiers might have the leisure time and quality of life to exercise and bike. But, just as often, order take-out and play video games for entertainment.

Those in the lower tiers will sit at their desks and worry about the future until their job is outsourced.

Obesity is the least of the problems that this stunning vision of how the world ought to work caused. Marriage rates are plummeting as the two-parent family is becoming extinct. So is any sense of purpose, meaning, and optimism about the future. Like obesity, the decline of marriage is a symptom.

A healthy society isn’t just defined by waistlines, but by its capacity for personal fulfillment.

That’s why nanny states don’t make people healthier. As the Romans used to say, “Mens sana in corpore sano.” A healthy body requires a healthy mind. An unhealthy society makes for unhealthy minds and bodies. And even if a war on obesity were to succeed, there are plenty of other unhealthy outlets.

No regime can force people to be healthy because no government agency can make people happy.

Happiness is not a state of bliss that comes from a sugar rush, from finishing a level, binging a series, or enjoying some other form of transitory happiness in a society that has been built for no other kind.

Real happiness comes from a sense of personal fulfillment through living a meaningful life.

Totalitarian societies aren’t always conventional dictatorships. They include systems in which a social elite leverages its power to deprive most people of personal agency without anyone being aware of it. It is possible to be consciously unaware and yet subconsciously living in a state of societal repression.

The old America, the one of wagon trains and frontiers, busy factories and spaceships, was a lot less fat, even though its diet tended to meats, starches, and liquors, because its people were going somewhere.

Morbid obesity, drug and alcohol use, addictions and despair happen when people have nowhere to go.

Lockdown America is the final episode of a brave new world in which everyone is paid to sit home and wait for the geniuses who have built this broken society to save them from its latest disaster. And, in between sending coronavirus patients to nursing homes, they’ll go to war against obesity. Again.

A healthy society is a place where people not only leave their homes, but they have a reason to do so.

It’s diverse, not in the sense of people of different races angrily shouting the same slogans, but in allowing people to think differently, live differently, and freely pursue their own separate goals.

Or, as an old dead white man once put it, “Life, Liberty, and the Pursuit of Happiness.”

It’s a society with room enough for people who write code and mine coal, for farmers and poets, factory workers and actuaries, human resource departments and cattle ranchers, the religious and the irreligious, radicals and moderates, vegans and meat eaters, soldiers and pacifists living together.

We used to have one of those countries. And we called it America.

For all its problems, it was a happier and thinner place. And one day we traded in that country for a more convenient one because we thought that would make life easier. We didn’t do it overnight. There were a thousand steps over at least a century. The people we put in charge transformed it to suit themselves. And they wonder why so many people are angry, fat, and unhappy in their utopia.

But they’re sure that they can build a procrustean government bed to make utopia thin again.

Did the FBI Want Robert Spencer and Pamela Geller Dead?

Did the FBI Want Robert Spencer and Pamela Geller Dead? FBI agent was at the…

Can a Christian Vote for a Democrat?

Can a Christian Vote for a Democrat? By Bryan Fischer The Democrat Party, fresh off…

Are Sanctuary Cities Like Biblical Cities of Refuge? By Bryan Fischer Those who are comparing…

Modi and Israel’s Coming of Age