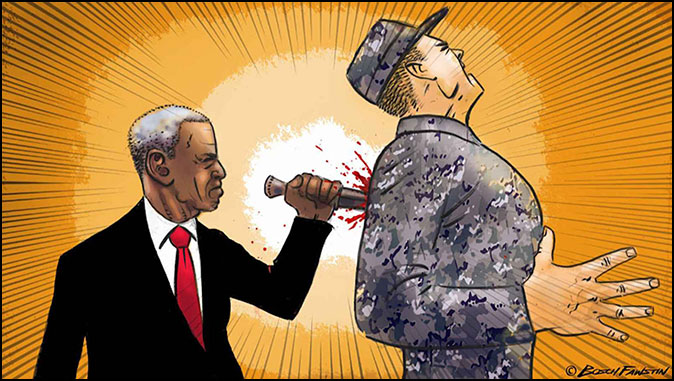 How Obama Sabotaged the American Military
Obama fundamentally transformed the military the way that he did the country.
By Daniel Greenfield

Daniel Greenfield is a Shillman Journalism Fellow at the David Horowitz Freedom Center specializing in investigative reporting on the Left and Islamic terrorism.

By the time Barack Obama left office, every branch of the military was smaller than it had been on September 11. But the change in size concealed the true impact of America’s most left-wing president in undermining our national security and weakening us in the face of our enemies.

“I’ve got a pen, and I’ve got a phone,” Obama famously boasted. He used the pen to unleash a blizzard of executive orders and memorandums. Some led to outraged protests, but some of his most devastating penned assaults on our nation’s military flew under the radar.

One of those took place during the end of his last year in office. His memorandum, “Promoting Diversity and Inclusion in the National Security Workforce”, created the woke military of the Biden administration by putting identity politics, diversity quotas, and political indoctrination at the heart of the military’s mission.

Obama had always resented the military. Even former General McChrystal, an Obama loyalist fired for describing his boss a little too aptly in the presence of a Rolling Stone reporter, described him as “uncomfortable and intimidated” by generals. But Obama’s parting shot at the military cut the generals down to size by transforming them into community organizers.

His order redefined diversity as the military’s “greatest asset” and reinvented national security as a system for maximizing employment diversity by race, gender, ethnicity, sexual orientation, and every identity politics metric, but not the military metrics that truly mattered, readiness, competence, and a willingness to wage war in defense of the homeland.

Along with transforming the military into another quota-based federal employment agency in which skills and capability mattered much less than being a disabled transgender Eskimo, the order also demanded that national security agencies should make “implicit or unconscious bias” training mandatory for “senior leadership and management positions”. Divisions that didn’t earn sufficiently high IQ (Inclusion Quotient) scores would also be hit with bias training.

Implicit bias training is a form of political indoctrination which asserts that all white people are racist. Its sessions force participants into accepting its radical racial worldview or be treated as obstacles to the new organizational mission. Implicit bias training has succeeded in forcing out talented executives from corporations and officers from the military, replacing them with political activists and bootlickers cowardly enough to repeat Marxist dogma for the sake of their careers.

Obama’s memorandum led to the expansion of implicit bias within the military such as Army Secretary Eric Fanning’s infamous Directive 2017-06 ordering mandatory implicit bias training for “soldiers and employees in senior leadership and management positions” that was protested by chaplains for infringing on religious freedom. While the Trump administration later ordered a ban on such abusive training in the military, by then Obama’s order had long since been circulating in its cultural and organizational bloodstream, and was quickly restarted by Biden.

Biden’s first executive orders not only rescinded the ban, but doubled down on making the military more woke, more racist towards white Americans, and more incapable than ever. The new equity push went even further by attributing any failure to meet racial, gender, and other identity politics quotas to the grand hoax of “systemic racism” –a practice outlawed by the Civil Rights Act of 1964. Meeting these quotas became the foremost task of senior leadership.

China might beat us in the hypersonic weapons race, but America’s top military brass would pull out all the stops to make sure that they had the most diverse arrangement of people, preferably in senior leadership positions, to establish their progressive credentials.

The ‘wokening’ of the military was not a bottom-up, but a top-down phenomenon, imposed at every step from branch leaders to academy superintendents, after originating from the White House. Obama’s “Promoting Diversity and Inclusion in the National Security Workforce” was one of the final building blocks for his key administration goal of bringing the most conservative arm of the federal government into compliance with the political agendas of the radical Left.

Obama’s former NASA administrator, Charles Bolden, had caused a stir when he frankly told Al Jazeera that his boss had given him three top priorities, none of which involved space, but one of which was Muslim self-esteem. No military leader had come out with an equally honest assessment, but Obama’s priorities for the military was looting its physical resources for environmental gimmicks like the Navy’s disastrous biofuels programs, and its human resources for a massive community organizing and Marxist indoctrination effort under the flag of diversity.

Obama didn’t just leave the military smaller in size, but smaller in spirit, its leadership class no longer dedicated to national security, but to the identity political agendas of the radical Left.

By Obama’s second term, male Army ROTC cadets were being forced to march in women’s high heels. The humiliating woke rituals, whose purpose is not the stated one of inclusion, but of exclusion, of demeaning and destroying the morale of the traditional fighting man, continue to hollow out the military readiness of armed services waging a culture war against themselves.

Obama remade the military just as he remade the nation, from a team based on individual worth into a broken system divided by the intractable gulfs of oppressors and the oppressed.

No military organization can function that way and no nation can survive that way.

Obama understood the nature of big government all too well. It’s a lot easier to program a bad leftist idea into the system than to get it out again. Bill Clinton had tried to tame the military through incremental changes, but Obama went for broke by transforming its mission.

By making diversity the mission, politics in the form of diversity and inclusion also became the mission. The new military mandate was to recruit diversity and to purge its opposite, the traditional white males who made up the backbone not only of the leadership, but of active duty combat personnel. Once an apolitical institution on matters beyond its purview, the military adopted leftist politics as its guiding light. The new advisers pushing diversity and inclusion warned the brass that the military could not become truly inclusive unless it adopted identity politics and all the Marxist ideas and anti-American attitudes that came with it.

That’s why Ibram X. Kendi, a disgraceful racist, showed up on reading lists and why Naval officers denounce America as if they were being held captive by the Viet Cong.

The road to our disgrace in Afghanistan was paved by the Obama administration which embraced a policy of military defeatism on the battlefield and in its institutions. Long before the Taliban entered Kabul, the moral struggle had already been lost in Washington D.C.. While the Taliban were carving up Afghanistan, the nation’s military leaders were busy implementing diversity quotas, imposing implicit bias training, and promoting critical race theory.

The brass who had accepted Obama’s diversity mandate began destroying the military in order to save the military. And they kept it up under the Trump administration even when Obama was gone. Any officer who protested was punished, smeared, and forced out. It will take more than a change of administrations to break that vicious cycle. It will take a change of leadership.

Obama fundamentally transformed the military as he did the nation. It must be fundamentally reformed by removing the brass who traded victory for diversity and anti-Trump lunacy. Gen. Mark Milley, the Chairman of the Joint Chiefs of Staff, who had ranted to aides that President Trump was spreading the “gospel of the Fuhrer”, and defended critical race theory, is proof.

Otherwise the defeat in Afghanistan may become the first of even worse defeats to come.

Editors’ note: This article on the subversion of the American military is one of a series Daniel Greenfield has written on what is probably the greatest and most immediate threat to America’s security and survival. It’s a subject surrounded by silence. See the Freedom Center’s articles on this issue at its new campaign site, Committee for a Patriotic Military. Also make sure to read Daniel Greenfield’s booklet, Disloyal: How the Military Brass is Betraying Our Country.

The Bureaucracy’s Democrat Majority Made America a One-Party Government

The Mislabeled “Inflation Reduction Act of 2022”