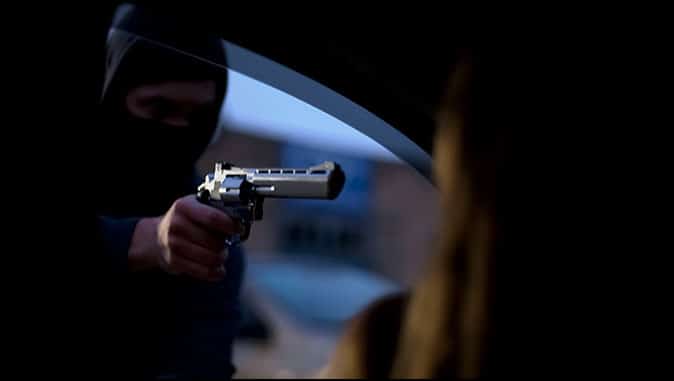 How Democrats Created a Carjacking Outbreak
BLM race riots and pandemic lockdowns made carjacking into big business.
By Daniel Greenfield

Carjacking is booming like no form of crime in Biden’s America. Homicides are up, especially in those cities that defunded their police, pharmacies are going out of business in San Francisco and other cities where shoplifting was legalized, but stealing cars is where it’s really at now.

Carjackings more than doubled in Chicago, and increased 537% in Minneapolis, the capital of police defunding, and around 500% in Washington D.C.

In Atlanta, mayoral candidate Antonio Brown, who had advocated defunding the police, was leaving a ribbon-cutting ceremony when he was carjacked and dragged for a block.

“These kids were in my opinion somewhere between 7- and 11-years-old,” Councilman Brown said, after calling the police.

They probably weren’t 7, but 11 is all too plausible because the carjackers are getting younger.

The nation was briefly shocked when four children, including an 11-year-old and a 12-year-old, were busted for armed robberies and carjackings in California. A 12-year-old was arrested for four armed carjackings in an hour in Washington D.C. In Pittsburgh, a carjacking crash ended in the deaths of three teen carjackers: the youngest of whom was a 14-year-old.

In one of the worst teen carjackings, two teenage girls, a 13-year-old and a 15-year-old, carjacked and killed a Pakistani Uber driver.

(One reason Ubers have become harder to find is that drivers are afraid of being carjacked.)

In Philly, a Lyft driver avoided a similar fate by pulling out his gun and shooting a 14-year-old carjacker.

The media, which assured the country that defunding the police, freeing all the criminals, and ending bail would reform public safety, claims to be baffled by the rise in carjackings.

Some are blaming the increase in teen carjackings on the teachers’ union shutdown of schools.

That’s certainly a factor, but the teens turning to carjacking would otherwise be moving drugs. The pandemic lockdowns however made stealing cars more profitable than running drugs.

The lockdown’s destruction of the economy has made new homes unaffordable, and also increased the price of cars. Fewer people and businesses could afford to make big new purchases during the shutdown, and instead held on to their existing cars.

The price of new cars is sharply up, but used car prices have shot up by as much as a quarter and inventory is low. That’s where the carjackers come in. Supply is meeting demand.

It’s not just the consumer market. There are severe rental car shortages and Uber shortages.

Even after the economic devastation of the Democrat lockdowns, Biden’s signature program is pushing subsidized electric cars. Car manufacturers are waiting to see what sort of mandates and rewards they’ll be dealing with under Biden’s infrastructure program. And with the supply of chips low and prices rising, they’re in no hurry to roll out cars they may not be allowed to sell.

While the luxury housing and car markets are thriving, the lower end has locked millions of Americans out of buying a home or a car. Car manufacturers are happy to push luxury electric SUVs to buyers who can afford to pay whatever the asking price may be. Working class and middle class car buyers and businesses that depend on fleets of vehicles are out of luck.

Urban organized crime is meeting the demand for used cars with underage carjackers.

Democrat municipalities dismantled law enforcement, destroyed police morale, and shut down much of the justice system in response to the Black Lives Matter riots over the overdose death of George Floyd. The arrest and prosecution of teens, already unpopular, went by the wayside.

Organized gangs employed young recruits to shoplift from stores when it became clear that even the most brazen daylight robberies would not be prosecuted in major urban areas.

Especially if the perpetrators were teens. And the younger the teens, the better.

Gangs that had used children to run drugs because they were unlikely to face serious charges moved them into robbery and then, as cars became a hot commodity, into carjacking.

The criminal justice reform movement has fought against prosecuting teenagers, even those who commit murder, as adults. And, indeed, the two teen girls who killed an Uber driver in D.C. reportedly reached a plea deal. Teen carjackers know that even if they kill their victim, the worst thing that will happen is they’ll be in the custody of the state until they become legal adults.

Teen carjackers assault drivers while fearlessly brandishing guns like it’s hunting season because they know the police won’t shoot them and district attorneys won’t lock them up.

While criminal justice reformers claimed that trying teens as adults ‘criminalized’ children, it dissuaded teens and, more importantly, the organized gangs using them as pawns. The decriminalization of teenage crimes led to a boom in teens being recruited by organized crime.

The more Democrats refuse to prosecute teens, the more teens become criminals. And their crimes escalate until they destroy someone else’s lives or just their own.

These kinds of unintended consequences are typical of criminal justice reform.

The carjacking boom is the outgrowth of the two worst Democrat policies from 2020. The lockdowns wrecked the economy and created a booming black market for criminals. The BLM movement and its race riots helped spur a decriminalization that led to a massive crime wave.

If Biden’s electric car push implodes, the auto market may begin to stabilize and recover. But the carjackings will just give way to other lucrative criminal enterprises. Decriminalizing drugs and prostitution won’t decrease crime or make society safer. The most basic level of crime is still theft. Legalizing immoral social ills will just shift criminal resources over to various forms of theft.

Democrats have become socialists and their obsession with controlling markets is leading to artificial shortages that criminals are happy to meet by redistributing some wealth. Like cars.

Socialism, whether in the USA or the USSR, feeds a black market as consumers try to get hold of whatever is no longer available in the controlled legal marketplace. And since those socialists criminalized legal sales of many products, while decriminalizing crime, the criminals are filling niches by stealing from those who have a product in order to sell it to someone who doesn’t.

When capitalism becomes a crime, then criminals become capitalists.

The nightmare of 11-year-olds stealing cars at gunpoint in Washington D.C., Chicago, Philly, and other major cities, was born from the pandemic lockdowns and the Black Lives Matter riots.

Everything that Biden and the Democrats are doing will only make the new crime wave worse.

In Biden’s America, carjacking is how used car sales work. And 11-year-olds hijacking cars at gunpoint are the new used car procurers of a broken economy that prints worthless money.

The Democrats are happy to write everyone a check. But pieces of paper with Biden’s signature on them are only worth what they can buy. Biden’s checks can’t buy you a car or a home. But they’ll buy a car stolen by an 11-year-old boy being run by Biden’s base of urban criminals. If he gets caught, he’ll be out the next day. And you’ll still be out of a car. You may not be able to find a new or used car you can afford to replace it with on the lot, but the carjackers will find one.