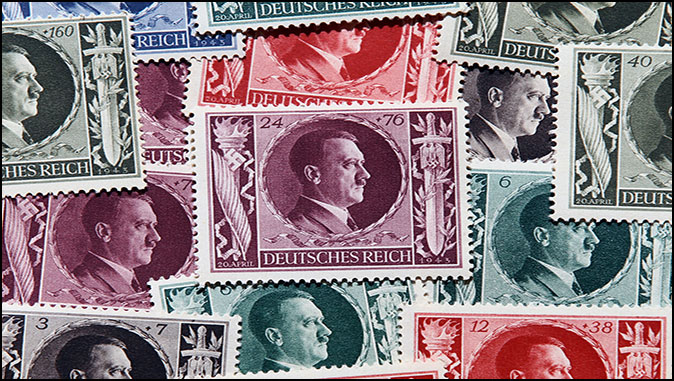 Hitler’s Multicultural Supporters
You don’t have to be a white supremacist to love Hitler.
By Daniel Greenfield

Researchers have found that the #HitlerWasRight hashtag was intertwined not just with the usual white supremacists, but with more “progressive” hashtags like #FreePalestine.

Raja, a Pakistani Muslim, and Halawa, who hails from Israel’s West Bank, don’t fit the image of what people think Hitler’s fanbase looks like, but they’re more typical than you might think.

During the latest conflict between Israel and Hamas terrorists, Pakistani celebrities and politicians praised Hitler.

“I remember a saying by Hitler who said he had spared some Jews to let the world know why he killed them. Today I have developed a firm faith in this,” a Pakistani parliamentarian declared.

Pakistani actress Veena Malik tweeted the same fake Hitler quote. “I would have killed all the Jews of the world … but I kept some to show the world why I killed them.”

But it’s not just about Israel or the Jews.

Fayaz ul Hasan Chohan, a minister in Pakistani Prime Minister Imran Khan’s cabinet, allegedly named Hitler as one of his idols. He later positively compared Khan to Hitler. When CNN cut ties with Raja over his Hitler tweet, Khan’s right-hand man and one of his closest advisers, tweeted in support of him.

But then, as a Der Spiegel article began, “It’s not hard for a German living in Pakistan to get used to these differences, but one contrast is hard to stomach: Most people like Hitler.”

“Pakistanis always hone in on that topic whenever they talk to Germans. ‘We’re Aryans too,’ they say,” he observed.

The situation isn’t much better in Halawa’s West Bank where ‘Hitler’ is a popular name or nickname used by local terrorists. Among them is Jamal ‘Hitler’ Abu Roub, an Al Aqsa Martyrs Brigade terror leader, whose original run for office led to headlines like “A Man Called Hitler Runs for a Seat” and “Palestinians Vote for Hitler”.

“Oh Hitler, you have brought pride to the homeland and Allah,” his supporters gushed.

Mahmoud Abbas, the Palestinian Authority boss, wrote a Holocaust denial thesis as part of his education in the USSR. A few years ago, he claimed that the Holocaust was the fault of the Jews.

But appreciation of Hitler among non-white racialist nationalists and supremacists goes well beyond the usual predictable antisemitism in the Muslim world. And it can be found right here.

In the United States, the two main non-white forms of racial nationalism, black nationalism and the La Raza movement, were rife with admiration for Hitler and Nazi Germany.

“What the Negro needs is a Hitler,” Marcus Garvey had declared, and urged his followers to read Mein Kampf. “Hats off to Hitler the German Nazi.”

Admiration for Hitler and Nazi Germany was not unusual for black nationalists.

In The German Case Against the Jews, W. E. B. DuBois defended Nazi bigotry. Under Hitler, he claimed that there was “more democracy in Germany than there has been in years past.”

The Nation of Islam carried forward the black nationalist agenda. Like Garvey, Malcolm X met with the KKK. He also welcomed the leader of the American Nazi Party, to a Nation of Islam event. After his conversion to more normative Islam, which is often used to falsely depict him as moderating his views, he met up with the infamous Islamic cleric known as Hitler’s Mufti.

Louis Farrakhan, the Nation of Islam’s current leader, has said, “Here come the Jews. They don’t like Farrakhan, so they call me Hitler. Well, that’s a good name. Hitler was a very great man.” The black supremacist leader suggested that “He raised up Germany from nothing. Well, in a sense you could say there’s a similarity in that we are raising up our people from nothing.”

This idea of Hitler as a model for black leaders pervades the black nationalist movement.

“We must take a lesson from Hitler,” civil rights leader Stokley Carmichael, who later changed his name to Kwame Ture, had argued . “I’ve never admired a white man, but the greatest of them, to my mind, was Hitler.”

On the other side of the trinity of identity politics is La Raza.

“Hitler represents, in short, an idea, the German idea, so often humiliated once called by the militarism of the French, the perfidy of the English,” Jose Vasconcelos wrote in 1940. “What is becoming evident, even for the stubborn, is the triumph of Germany over its rivals and the historical change that will consequently take place in the world.”

“But we will win with the German victory!” he assured readers of his pro-Nazi magazine.

There was nothing unusual about Vasconcelos’s collaboration with the Nazis. Latin American eugenicists were often socialists with fascist sympathies who admired Nazi Germany. And when the Ford Foundation and other leftist organizations backed Latino nationalists in America, they mainstreamed eugenics, national socialism, and racial supremacism as progressive ideas.

As they’ve done with black supremacists and the Black Lives Matter movement.

The pernicious myth that racism is a fundamentally different phenomenon among non-white groups, politically or morally, is at the heart of everything from political correctness to critical race theory. But the admiration for Hitler and the Nazis across racial lines shows that’s a lie.

Racism is racism. And racial nationalists have a natural sympathy. That’s what impelled the alliances between Malcolm X and the KKK. It’s what turned a Nazi sympathizer’s racial tract into the basis for the La Raza movement in the United States. It’s why Hitler remains popular in the Muslim world and among a variety of non-white racialist and nationalist organizations.

You can see photos of black soldiers in Nazi uniforms fighting as part of the Mufti of Jerusalem’s Free Arabian Legion which included Arab and African Muslim soldiers. A generation after the Mufti was urging Hitler to wipe out the Jews, Malcolm X met up with him in Saudi Arabia on a pilgrimage to Mecca.

Malcolm X called Hitler’s Mufti a “cordial man of great dignity” and casually noted that he “referred to New York as Jew York.” Three years earlier, Malcolm X had shared a stage with the leader of the American Nazi Party. And nothing had really changed with his famous “epiphany”.

Hitler’s popularity says little about the syphilitic failed painter, but a great deal about his fanbase and the nature of racism. Hate is universal and ubiquitous. It crosses all racial boundaries. There is no division between racism and reverse racism, between punching up and punching down.

Beyond antisemitism, Hitler and the Nazis remain popular among racial supremacists and nationalists because they embody the ultimate model and ideal of killing the ‘other’. Mass genocide is the final seductive and murderous fantasy that runs through Islamist groups, through black supremacist movements and through La Raza ideology.

Those who are not members of the group must die off or be killed.

There’s nothing ‘white’ about this idea. It’s as old as tribe and time. And some of the worst racists in the world are non-white members of racial movements that admire Hitler.