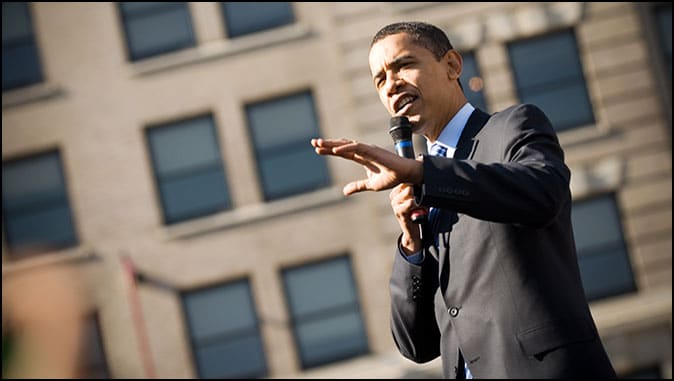 Had Obama Not Played the Race Card, George Floyd Might Be Alive
A reflection on the Instigator-in-Chief.
By Larry Elder

George Floyd might be alive had former President Barack Obama not, for eight years, consistently play the anti-cop race card.

Despite receiving more white votes than 2004 Democratic candidate John Kerry, Obama said: “The legacy of slavery, Jim Crow, discrimination in almost every institution of our lives — you know, that casts a long shadow, and that’s still part of our DNA that’s passed on. We’re not cured of it….Racism — we are not cured of it.”

Early in Obama’s first term, an incident in Cambridge, Massachusetts, gave him a golden opportunity to defuse the lie that the police engage in “systemic racism” against Blacks. The Cambridge police briefly arrested Harvard professor Henry Louis Gates, a Black friend of Obama, in his home. Gates, back from a trip, couldn’t open his front door and reportedly asked his driver to help. A neighbor, observing two people she did not recognize trying to force open the front door of Gates’ home, called 911. The cops arrived and politely asked Gates to exit the home so the police could determine ownership. Instead, Gates mouthed off and was briefly arrested.

Obama said, “The Cambridge police acted stupidly.” But the Cambridge Police Superior Officers Association and the Cambridge Police commissioner insisted the officer simply followed protocol. Obama’s statement infuriated officers all across the country and set up a template for the Obama administration: Cops systemically engage in unlawful anti-Black racial profiling.

Suppose Obama had not insultingly denounced the Cambridge police. Suppose, instead, Obama had said: “I’ve just spoken to my friend, professor Gates. I reminded him that he is a role model and that his behavior with the Cambridge police officer, who was merely doing his job, was unacceptable. We need to understand as Americans that officers typically have a difficult job. Yes, there are bad cops, but for the most part, they’re trying to do their best. And contrary to popular perception, the police, in recent years, have killed more unarmed whites than Blacks. It is a lie, not supported by the evidence, that cops are killing Blacks just because they’re Black. This is not your grandfathers’ America. It is our job as civilians to be respectful, polite and by all means comply. Comply; you won’t die.”

Suppose Obama encouraged Blacks to comply with the police and that if one feels mistreated, to get a name or badge number and sort it out later. Eric Garner died after an encounter where New York City cops arrested him for selling cigarettes. Had he not resisted, he would likely still be alive. Jacob Blake was shot several times by the Kenosha, Wisconsin, police when they suspected him of reaching for a knife. Had Blake complied, he would not be in a wheelchair today. Would that have encouraged Black suspects like George Floyd to respond differently to an encounter with the police?

Obama knows the statistics and studies. He knows there is no evidence of anti-Black “systemic racism” on the part of the police. But the political Obama knows that Black anger and resentment translate into Black votes. How many routine police encounters with Blacks escalate into something far more serious because young Blacks believe the “systemic racism” lie pushed by Black Lives Matter and their sympathizers?

Polls rate Barack Obama as one of the most admired people in America, particularly among Black Americans. Out of office, he maintains respect, power, stature and influence. As president, he could have saved lives by putting truth over politics. He chose not to. As a former president, he still can.

Mr. Obama, tell the truth. Save lives. It’s not too late.