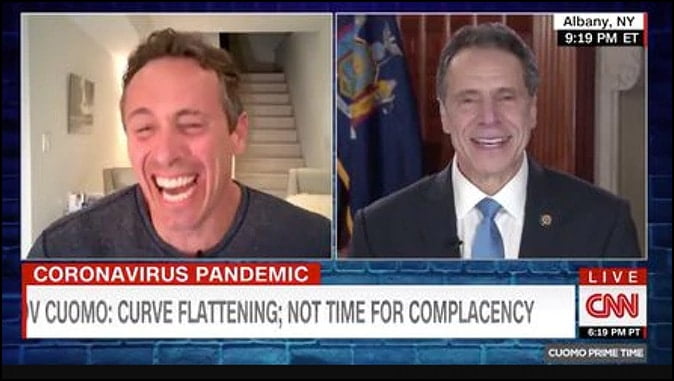 We’re in a post-lawful society nowadays and the current rule is that our rulers can do anything as long as it’s in the name of the coronavirus or Black Lives Matter. Even so this is pretty egregious.

Governor Cuomo, who despite his denials, killed thousands of senior citizens by forcing nursing homes to accept coronavirus patients, only to dismiss the resulting outrage as just “politics” has decided to use an official state site to sell a ridiculous propaganda poster touting his record fighting the pandemic and dismissing criticism with, “Forget the politics”.

Mind you this is a poster that includes a slam at President Trump.

Because forgetting the politics means forgetting how many grandmas and grandpas, Governor Grandma Killer killed, but not forgetting to take shots at Trump.

The ultimate fault though belongs to Republicans for failing to properly message and pursue the deaths of tens of thousands of senior citizens while jumping on every shiny object instead.

What do we amount to as a country if we not only let that happen, but let them get away with it?

Thousands of men and women who worked all their lives and paid their taxes, who raised families, who wanted to watch their grandchildren grow up, died in large enough numbers that their bodies piled up in sheds, and the same nation that ground to a halt for Michael Brown and Freddie Gray shrugs. Where is even a fraction of the outrage that has been lavished on Ahmaud Aubrey for those thousands of wrinkled men and women, black and white, gasping out their last breaths in nursing home beds?

Cuomo, Whitmer, Murphy, and Newsom did not believe that they were worth saving. If we do not speak the truth, if we do not fight for justice for them, then are we as a nation really worth saving?

They Have Sown the Wind

What Is This Love Affair with Socialism?

What Is This Love Affair with Socialism? By Dr. Jerry Newcombe “Those who do not…

Christians, Stop Saying Jesus Is the Son of God. It Provokes Muslims

Christians, Stop Saying Jesus Is the Son of God. It Provokes Muslims By Robert Spencer…

The Land of High Perversion and Dead Babies goes Self-Righteous on Trump?

The Land of High Perversion and Dead Babies goes Self-Righteous on Trump? By Michael Bresciani…