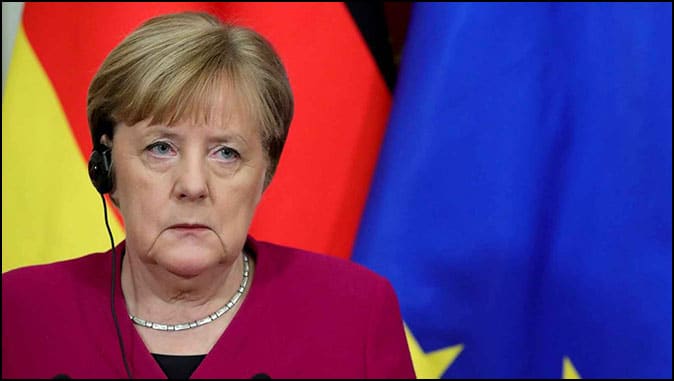 Germany at the Crossroads
Which party will rise to power after Merkel?
By Joseph Puder

The recent elections in Germany did not resolve the question of who will succeed Germany’s Chancellor Angela Merkel’s 16-year stint in office. Having created a legacy as one of the longest-serving chancellors since World War II, Merkel’s “shoes” appear to be exceedingly large for the two contenders for the office of Chancellor. Social Democratic Party (SPD) candidate Olaf Scholz, 63, is currently serving as Finance Minister in Merkel’s government, as well as holding the title of Vice Chancellor. Merkel’s would be successor from her own Christian Democratic Union (CDU) party, Armin Laschet, 60, is serving as Minister-President (Governor) of the state (land) of North Rhine –Westphalia, and leader of the CDU. Both candidates for the chancellorship have claimed that they will continue Merkel’s policies.

Known affectionately as “Mutti,” (mother in German), Merkel (67), was seen as a steady and reliable hand. She has generated a great deal of trust among the German people, both young and old. She was able to hold together the union between the CDU and its sister party, the Christian Social Union (CSU), in Bavaria. In the 2013 election, Merkel was credited with expanding the CDU’s voter base due, in large part, to her popularity.

Merkel’s CDU is described as a center-right party, though she was from the former more conservative Communist Eastern Germany, she has gradually moved the party to the liberal left, basically upstaging the leftist SPD and the Greens party on issues such as the environment (renewable energy), and immigration. This however, got many CDU officials and rank-and-file members to asking if the CDU was still “sufficiently conservative.” As a result, many CDU conservative voters abandoned the CDU, and voted for the newly-formed right-wing party, Alternative for Germany (AfD). The suspensions of military conscription in 2010, and the phasing out of nuclear energy, were confirmation that Merkel moved the party toward a liberal direction.

Merkel explained where she stood ideologically. “Sometimes I am a liberal, sometimes I am a conservative, sometimes I am a Christian-social — and this is what defines the CDU.” At an October, 2010 speech in Potsdam, west of Berlin, Merkel admitted that, “German multiculturalism has ‘utterly failed’.” Still, in 2015, Merkel decided to admit over a million mostly Muslim migrants from Syria, Iraq, and Afghanistan. Her credibility was damaged but eventually restored anyway, despite Islamist terrorism and crime, as well as economic hardship resulting from her decision. Evidence of her popularity is the fact that immigration was not a contested issue in the September 26, 2021 election, despite her immigration debacle. The election also marked the end of the Merkel era for Germany and Europe. Merkel wasn’t only a popular chancellor; she was Europe’s leader as well.

The inconclusive results of the election left the secondary parties, the Greens and the Free Democratic Party (FDP), as kingmakers. The SPD, under the leadership of Olaf Scholz, won 25.7% of the vote and 206 seats in the Bundestag, the German parliament. His rival, Armin Laschet, had a disastrous campaign and lost over a million voters or 8% of its strength. He registered the lowest results for the CDU in recent history. Nevertheless, the party still got 24.1% of the total vote, and 196 seats in the Bundestag, with a shot at the chancellorship if he could persuade the Greens and the FDP to join him in a coalition government. In the meantime, Scholz, in what appeared as a victory speech pointed out that, “The mandate for us is to do what the people want, to lead a good government that will set the course for the decade ahead, to bring more respect into society, to modernize our industrial sector, and to halt man-made climate change.”

Annalena Baerbock (40), co-leader of the Green Party, and its candidate for the chancellorship, did rather well in this election, receiving 14.8% of the total votes and garnering 118 seats in the Bundestag. Baerbock and her party leaders are bound to receive major posts regardless of who will form the next coalition government, Scholz’s SPD or Laschet’s CDU. The other winner is Christian Lindner (42), the leader of the Free Democratic Party (FDP). It received a respectable 11.5% of the vote, electing 92 representatives to the Bundestag. He too can be certain to partake in the next government. The AfD party retained its strength at 10.3% of the vote with 83 seats in the Bundestag. The Left party (former Communists) barely crossed the threshold with 4.9% of the vote, and 39 seats in the Bundestag. The last two parties, the AfD and the Left are unlikely to be invited to the government table, albeit, the SPD once toyed with the idea of inviting the Left party to join them. Scholz, however, being a moderate, has rejected the idea of cooperating with the Left party. To form a coalition government either Scholz or Laschet must master 368 parliamentary votes out of 735 seats in the Bundestag.

Two significant developments occurred in this election; voters, especially younger, urban, and educated flocked to the FDP and the Greens, and away from the two big parties. The combined Greens and the FDP increased their votes by 6.7%, most of it lost by the CDU. The other interesting point is the almost total absence of foreign policy issues on the agenda of the main parties.

The CDU and FDP are the political parties most committed to NATO’s goal of 2% defense spending, and greater military responsibility in the Indo-China-Pacific region. The CDU/CSU is committed to the US nuclear weapons in Germany. Conversely, the SPD is more inclined to remove the nuclear weapons from Germany. The SPD, under the leadership of Scholz, has moved into a more left-leaning position on security and defense, including objection to the use of armed drones. Both the CDU/CSU and SPD support the Nord Stream project with Russia. Although China is a key foreign policy issue on the Transatlantic/US-German agenda, most Germans want Germany to be neutral in a China-US cold war.

The Green Party has moved to the center on security and defense issues under the leadership of Annalena Baerbock. The party has adopted a more moderate tone on the role of NATO. The left-wing of the party is however, still rooted in pacifist policies, criticizing NATO’s 2% goal, and US nuclear weapons in Europe. The Greens are critical of Russia’s human rights, and reject the Nord Stream 2 pipeline. They support sanctions on Russia’s human rights violations. They are also critical of China’s repression in Hong Kong, and the treatment of the Uighurs.

Merkel has repeatedly underscored Germany’s unconditional support for Israel by declaring that Israel’s security is “Staatsraeson” or Germany’s raison d’état. Yet, her German government has been appeasing and aiding the Iranian regime which is seeking to “wipe Israel off the map.” According to Al-Jazeera quoting Christian Hacke, professor emeritus at the Institute for Political Science and Sociology at Bonn University, regarding Germany’s Israel policy in the post-Merkel government. Hacke stated that, “A solid and close relationship with Israel as a continuum will remain part of Germany’s Staatsraeson.”

Before we close the book on Angela Merkel, It is worth noting that coalition negotiations may take months. In 2017, it took almost six months to form a coalition government. In the meantime, Merkel would still be at the helm for better or for worse.