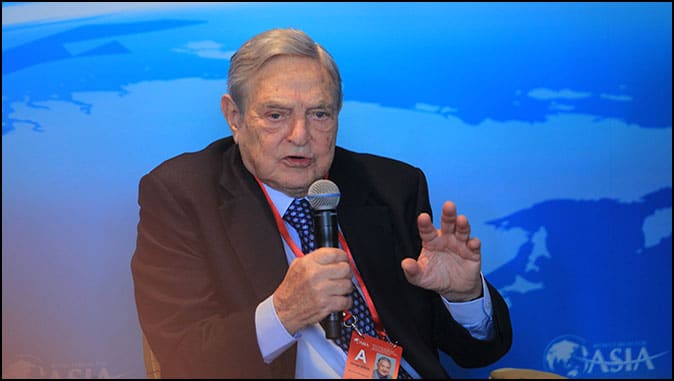 “In the past four years, Jesuit institutions have received at least $1.7 million in donations from the Open Society Foundations (OSF) that are funded by plutocrat George Soros,” said Catholic website ChurchMilitant.

“By examining documents recorded on the internet, it’s evident that the Jesuits’ biggest recipient of Soros’ largesse is the U.S.-based Jesuit Worldwide Learning. In 2016, the organization received $890,000, while, in 2018, it garnered another $410,000. This was the only one of the three Jesuit institutions to recognize the Soros Foundations as a ‘partner.’”

To be a partner of George Soros is a great tragedy, because Soros is a left-wing billionaire engaged in multiple Marxist revolutions around the world. Even though his organizations were expelled from Russia, he and especially his money have been welcomed among Jesuits. The Church Militant said,

Yet, Church Militant seems to be surprised that Catholic groups are helping Soros and socialism. There should be no surprise. Brazil, the largest Catholic nation in the world, has a massive presence of Liberation Theology in the Catholic Church.

Besides, Catholic support for Marxist ideas is not a new thing and has been a reality since the late 1800s.

The current pope, Francis, is a supporter of socialist ideas. Even though I support the pro-life stances of Francis, his stances against conservative Christians fighting the gay activism are horrible. But even “Catholic” right-wingers who want to overthrow the pope because of socialism have suspicious stances on homosexuality.

In the early 1600s, Dutch Protestants colonized Northeast Brazil, where they formed the first society with religious tolerance in Brazil. Under their rule, the Jews built the first synagogue in the Americas. The Dutch Protestants built what Brazil had not: Massive theaters, bridges and many other buildings that, after four centuries, remain today.

The Northeast Brazil, traditionally poor, never had so beautiful and stately buildings. Under Dutch rule, this was also the first capitalist society in Brazil.

In the Dutch colony, Jews and Protestants were protected from the Inquisition, which was active in other parts of Brazil, persecuting, torturing and killing Jews.

Yet, Jesuits poisoned the minds of Portuguese Catholics throughout Brazil, portraying the Dutch Protestant settlers as dangerous “heretics” who should be destroyed. After several battles, the Jesuits won and the Dutch had to leave Brazil. As the Jews would be persecuted by the Inquisition if they remained in Northeast Brazil, they chose to follow the Dutch and moved to New York, which belonged to the Dutch in that time.

The first banking system in New York was established by these Brazilian Jews under protection of Dutch Protestant capitalists.

So Jesuits expelled Dutch Protestants, Jews and Dutch capitalism and its progress. And the label “heretic” was so strong against Dutch capitalist Protestants that some Brazilian school books of the 1970s still recorded Dutch as heretic invaders.

Because of the Jews and Dutch Protestant capitalists in Northeast, Brazil could have become a capitalist power, but the Jesuits “saved” Brazil from such capitalist destiny and instead let New York occupy the post of capitalist power.

So Brazil, instigated by Jesuits, has in its history the horrible stain of rejecting and fighting against capitalism.

If Jesuits four centuries ago were persecuting capitalists, why are Catholics today surprised that Jesuits are partners of Soros?

It is not surprise also that Jesuits have a history of persecuting Protestants, who are historically more capitalist. The Catholic Encyclopedia by Charles G. Herbermann (1914 edition) says,

“As the object of the [Jesuit] society was the propagation and strengthening of the Catholic faith everywhere, the Jesuits naturally endeavored to counteract the spread of Protestantism. They became the main instruments of the Counter-Reformation.”

The Counter-Reformation was very successful in Brazil, where Jesuits destroyed the presence of Dutch capitalist Protestants and Jews and established again the Inquisition and total religious intolerance to protect their Catholic non-capitalist non-progress.

What are Jesuits doing today that is different from what Jesuits did in the past? The same Jesuits who were anti-capitalist troublemakers in the past continue committed to their old mission. The traditional anti-capitalist spirit of the Jesuits naturally led to Jesuit support of socialism. In this sense, Pope Francis is not to blame for being a socialist pope who attacks capitalism. After all, he is a Jesuit.

So if in the past Jesuits were persecuting and expelling capitalists and today they are helping George Soros and other socialists, why should any conservative Christian be appalled?