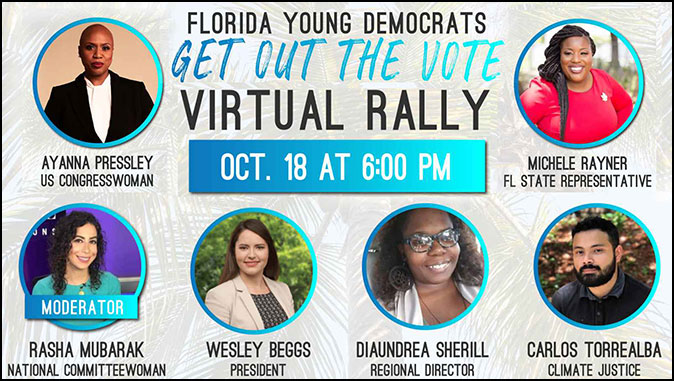 The Florida Democratic Party (FDP) has a problem. Her name is Rasha Mubarak, a Muslim activist who says Israel has no right to self-defense, memorializes terrorists, and degrades religious Jews, actions frequently exposed by this author. That said, Mubarak is also a National Committeewoman for FDP’s faction, the Florida Young Democrats. This month, FDP moved to shut down a Party event, because it featured Mubarak. Yet, the Young Democrats are still running events with her and advertising her on their website. Why is the Democratic Party allowing this dangerous anti-Semite to continue to affiliate with and represent the Party?

On Saturday, October 17th, an event sponsored by the Florida Democratic Party, a Muslim Activist Day of Voter Action, was canceled by the Party. The reason given for the cancellation was that the event was featuring controversial Muslim activist Rasha Mubarak as a speaker. This was acknowledged by Nadia B. Ahmad, a delegate to the DNC and co-founder of the Muslim Delegates and Allies Coalition, the group organizing the event and whose goal it is to “elect Joe Biden and Democrats up and down the ticket on November 3rd,” and Mubarak, herself. Ahmad labeled the Democratic Party “vile and calculating” for taking such action.

Responding to Ahmad’s defense of her in a Facebook post, Mubarak implied that FDP did this out of malice for her Palestinian Muslim background and made the wild claim that the Party was contributing to violence aimed at Palestinians. She wrote, “I appreciate my Muslim organizing family in FL and beyond for standing with me as the Florida Democratic Party extends the establishment’s violence against Palestinian women. FDP canceled an FL Muslim GOTV event because they refused to include me, a Muslim Palestinian woman, in the speaker lineup. The marginalization of Palestinian women in these spaces is not new, but we will not be silent.”

Most probably, Mubarak was “silenced,” instead, for years of radical and bigoted behavior. And no, this is not new for her. Next to the post, when someone comments, “I hope the Palestinian community in Florida remembers this day when these people… try to take our money for their campaigns,” Mubarak answers, “Who knows though? Because this definitely isn’t the first time. It’s been quite often over the years.” One of those times was the day after this author wrote a separate piece for FrontPage about Mubarak, titled ‘Islamist Jew-Hater Named Florida Young Democrat of the Year,’ and she claimed of having to perform “damage control” over it.

For nearly a decade, Mubarak has been pushing the notion that Israel has no right to self-defense. She did it in 2019, when Hamas launched more than 600 rockets into Israel leading to the deaths of four civilians, and Mubarak tweeted against anyone who would dare defend Israeli retaliation, including Nikki Haley, Bill de Blasio, and The Ellen Show producer Andy Lassner. She did it in 2013, when she flippantly posted on Facebook that US diplomats mouth the words “right to defend itself,” regarding Israel, “when they snore.” And she left no room for debate, in 2012, when she tweeted, “#LiesImTiredOfHearing Israel has the right to defend herself.”

Mubarak shows support for Palestinian terrorists. This past June and July, Mubarak posted memorials onto her social media for car-ramming terrorist Ahmed Erekat, who was shot and killed after attempting to run over an Israeli border officer stationed at a checkpoint. At the end of the 2014 Israel-Gaza Conflict, along with photos of a jubilant Hamas, Mubarak tweeted, “Thousands of people celebrating in the streets of Gaza for the victory. Alhamdulillah. #VictoryForGaza.” Mubarak has promoted material from Hamas-related media, and she has personally been affiliated with the Hamas-linked groups CAIR and Islamic Relief.

Mubarak has organized anti-Israel events that have devolved into the worst of anti-Semitism, where Jews have been labeled “terrorists,” “baby killers” and “Jesus killers.” In September 2013, Mubarak ridiculed Jews, herself, when she posted a report onto her Facebook page declaring that Orthodox Jews had asked the Israeli government for “beard-friendly gas masks,” a matter that our own US military has dealt with. About the report, which featured the side profile of an observant Jew with a long beard and side curls, Mubarak mockingly wrote, “Seriously? No seriously! Ufff… Lol…”

In truth, Democrats have someone within their party, Rasha Mubarak, who supports violence and incites hatred (a growing trend in the Democratic Party). She even posted a quote on her social media from 60s radical black activist Kwame Ture, this past July, calling for violence in America. The Florida Democratic Party was right to cancel an event featuring this woman. Regrettably, though, elements of the Democratic Party refuse to cut ties with her, most notably the arm of the Party that gave Mubarak her title as National Committeewoman, the Florida Young Democrats (FYD).

On the homepage of the official FYD website, one finds different images of Mubarak. One of them is from a flyer advertising Mubarak as the moderator of an event – a ‘GET OUT THE VOTE VIRTUAL RALLY’ – featuring as speakers US Representative Ayanna Pressley and Florida State Representative Michele Rayner. The event was scheduled to take place on October 18th, the day after the cancelled event, and indeed it did take place. A video from it is found on both the FYD and Mubarak Facebook pages.

On the video, while she does a decent job of getting through her introductions, Mubarak, who was wearing her big pendant of “Palestine” (shaped like Israel) around her neck, looks noticeably shaken. At the end of the event, she alludes to something bad happening to her. She exclaimed, “It’s been rough, y’all, dealing with FDP, leaving people behind! Are we trying to win Florida or what?!… I’m a Palestinian Muslim woman. In Tallahassee, I’ve been burned!”

After the first event was shut down, why was Mubarak provided a forum to say anything at the next one, especially given the fact that there were legislators participating who may wish to protect their public personas from associations with an extremist? Were the Young Democrats acting as renegades and ignoring what had taken place just one day earlier, or maybe they were just not aware of the circumstances?

Today, however, they cannot plead ignorance of Mubarak’s radical and racist views, and it is up to the Democratic Party and its officials to end this bigoted charade. The Party needs to cut ties with Rasha Mubarak for good.