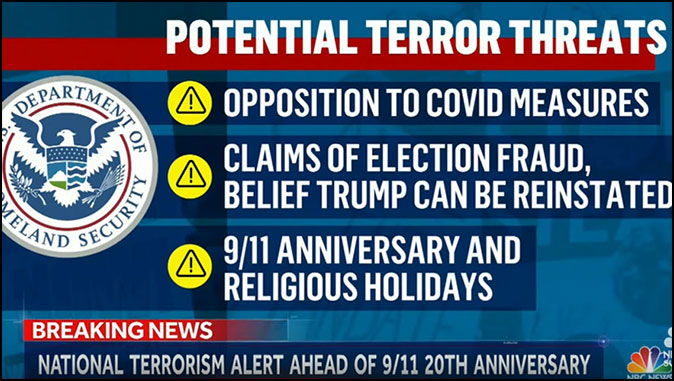 Feds Warn of Rise in ‘Domestic Violent Extremists’ – But Where Are They?
Look in the mirror.
By Robert Spencer

Diversity is our strength, y’all, and so here is some good news: a new bulletin from the Department of Homeland Security that took effect Thursday notes that “the Homeland continues to face a diverse and challenging threat environment.” But before you start celebrating diversity too enthusiastically in this case, be aware: the diversity that they have in mind means that they think you and I are part of the threat now as well.

They say that the threat is coming from both “domestic violent extremists and those inspired or motivated by foreign terrorists and other malign foreign influences,” and they really aren’t all that interested in the threat from those foreign terrorists: USA Today noted that “FBI Director Christopher Wray referred to the rising domestic terror threat, telling a Senate committee that domestic terror cases had more than doubled since early 2020.” If you’re wondering why you haven’t heard about all this new domestic terrorism, it’s because you’re not looking in the place where the feds are finding it: in your mirror.

We know this because the ostensible president’s handlers, and even Old Joe Biden himself, have repeatedly warned about a “white supremacist” terror threat that is supposedly the greatest threat the nation faces today. The only thing this scenario lacks are actual white supremacist terrorists. And so they have to be invented. Old Joe and the establishment media defamed Kyle Rittenhouse as a white supremacist last year, doing everything they could to make him fit their ridiculous myth of violent, racist, right-wing fanatics menacing the good and decent spiritual descendants of the soldiers who stormed the beaches of Normandy, the fine young men and women of Antifa.

Rittenhouse is by no means the only one. Virtually everyone who dissents from the Leftist agenda is a “white supremacist” and/or a “violent extremist” these days – even me. A few months ago, the Global Internet Forum to Counter Terrorism (GIFCT), an organization created by Facebook, Microsoft, Twitter, and YouTube to police terrorism on the Internet, bizarrely designated my organization Jihad Watch a “violent extremist” group, despite the fact that pretty much all we do is type, and report on jihad activity in the U.S. and around the world. In response to a letter from my attorney demanding a retraction, the GIFCT wouldn’t back down. Those who designated Jihad Watch as a “violent extremist” group explained that we reported on violent activity – terrorist bombings, murders, etc. – and that this in some way “dehumanized” Muslims.

They didn’t bother to explain how reporting on jihad terror activity dehumanized Muslims. They couldn’t have explained it, as it would have been impossible to explain. It is absurd on its face, as absurd as saying that reporting on. Nazi activity dehumanized Germans. The response to my attorney’s letter was essentially the increasingly common Leftist argument that speech that dissents from its party line is violence, and hence must be shut down.

That’s that, at least for now. So when you hear the DHS warning about a rise in the number of “domestic violent extremists,” now you know why: because ordinary, law-abiding Americans who utter inconvenient truths are being smeared with this label. And remember: if they can do it to me, they can do it to you. Remember also: it won’t stop with labeling.

Meanwhile, the DHS bulletin warned of the possibility of terror attacks in the coming weeks, as “several religious holidays and associated mass gatherings” are now approaching “that in the past have served as potential targets for acts of violence.” At the same time, however, officials conceded that intelligence agencies have not found any “imminent and credible threat to a specific location in the United States.”

Nevertheless, they are suggesting that alleged right-wing extremists who are enraged at Biden’s handlers’ gallop toward authoritarianism might strike: “The ongoing global pandemic continues to exacerbate these threats, in part due to perceived government overreach in implementation of public health safety measures.”

Oh yeah, there are jihadis around as well: “Further, foreign terrorist organizations and (domestic violent extremists) continue to attempt to inspire potential followers to conduct attacks in the United States, including by exploiting recent events in Afghanistan.” This is because al Qaeda and ISIS “celebrated perceived victories over the United States and encouraged the use of violence by their followers and supporters to further their objectives. These foreign terrorist organizations will likely continue to maintain a highly visible online presence in an attempt to inspire U.S.-based individuals to engage in violent activity.”

The part about jihadis possibly plotting to strike inside the United States is certainly true, and there is abundant attestation of it from the open and unapologetic words of the jihadis themselves. But the clear implication of the DHS bulletin, that the threat the jihadis pose to the U.S. is secondary to a terror threat from Americans who are angry at the federal government’s outrageous overreach in the less than ten months that Joe Biden has pretended to be president of the United States, is as baseless as it is ominous. And much more like it is coming.

U.S. Abortion Law in Comparison with the Globe

U.S. Abortion Law in Comparison with the Globe By Mary Szoch and Joy Zavalick The…

Rittenhouse and Justice in a Leftwing Dystopia

Woke Cancels God By Nathan Jones Tim Moore: From a biblical perspective, which is more…

Jew-Hate Rising And the consequences for the world. By Dr. Shmuel Katz The major instigators…