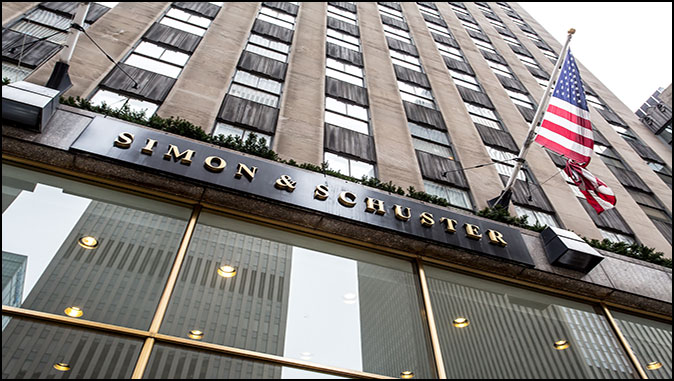 Fascist Simon & Schuster Employees Demand Publisher Drop Books They Disagree With
Proving once again that inside every “progressive” is a totalitarian screaming to get out.
By Robert Spencer

Over 200 employees of Simon & Schuster have gone full fascist, signing a petition calling on the publishing giant to stop providing a platform for everyone except fellow leftist fascists. The haters of the freedom of speech made three demands:

1. Cancel the two-book deal with Mike Pence and do not sign any more book deals with former members of the Trump administration.

3. Commit to ongoing reevaluations of all clients, authors, distribution deals, and all other financial commitments that promote white supremacist content and/or harm the aforementioned marginalized communities.

The fascists claimed that “when S&S chose to sign Mike Pence, we broke the public’s trust in our editorial process, and blatantly contradicted previous public claims in support of Black and other lives made vulnerable by structural oppression. Simon & Schuster has chosen complicity in perpetuating white supremacy by publishing Mike Pence and continuing to distribute books for Post Hill Press, including predator Matt Gaetz’s FIREBRAND. By choosing to publish Mike Pence, Simon & Schuster is generating wealth for a central figure of a presidency that unequivocally advocated for racism, sexism, homophobia, transphobia, anti-Blackness, xenophobia, misogyny, ableism, islamophobia, antisemitism, and violence. This is not a difference of opinions; this is legitimizing bigotry.”

Of course. No dissent from the left is a legitimate “difference of opinions,” because leftists see the world in a way that religious fanatics throughout history would find familiar: they alone have the vision of what is good and just, and since all those outside the fold are ignorant and evil, they have no rights that the arbiters of what constitutes acceptable opinion are bound to respect.

So far, however, Simon & Schuster’s chief executive Jonathan Karp has shown himself to be among the unredeemed. Karp reminded the fascists in his employ that the job of a publishing house was to allow for “a diversity of voices and perspectives.”Diversity! Karp’s choice of words must have driven the petitioners up the wall, because like all leftists, they are no doubt extremely proud of their commitment to “diversity” in all forms except, of course, a genuine diversity of thought. Black and brown and queer and trans voices and all the rest are welcome among them, as long as they all think the same way and say the same thing. But here was Karp gently making it clear that the petitioners weren’t really in favor of diversity in any meaningful way. “We come to work each day to publish, not cancel,” he said, “which is the most extreme decision a publisher can make.”

For that he will likely be canceled himself before too long.

The American left long ago embraced authoritarianism and fascism, and is increasingly intolerant of any point of view other than its own. Note that the petitioners included in its laundry list of denunciations the spurious propaganda neologism “Islamophobia.” “Islamophobia” is an illegitimate conflation of two distinct phenomena: crimes against innocent Muslims, which are never justified, and honest analysis of the motivating ideology of jihad terror, which is always necessary. It is inconceivable that anyone would want to publish a book calling for attacks on innocent Muslims or any innocent people, but there are many books discussing the motivating ideology of jihad terrorism.

Islamic advocacy groups and their leftist allies have been insisting for years that such books, too, constituted “Islamophobia.” Such analyses are what these fascists at Simon & Schuster want to stamp out. If the left succeeds in consolidating power, it will be impossible to publish, and likely illegal to enunciate publicly, any opposition to jihad violence and Sharia oppression of women and others, for there is no example of any such opposition not being considered “Islamophobic.”

The fascist employees also demanded that Simon & Schuster cut ties with my publisher, Post Hill Press (my last six books have been or are in the process of being published under Post Hill’s imprint, Bombardier Books), with which Simon & Schuster has a distribution arrangement. The petition libelously asserts that Post Hill “openly supports and normalizes violence against minors, Black women, and all Black people by individuals and the state.” This is, of course, not remotely true. It is how left-fascists lie in order to demonize and destroy their opponents. Although Karp has rejected this petition, expect to see much more of this sort of thing. We have not yet reached the high tide of left-fascism in America today.

Robert Spencer is the director of Jihad Watch and a ShillmanFellow at the David Horowitz Freedom Center. He is author of 21 books including many bestsellers, such as The Politically Incorrect Guide to Islam (and the Crusades), The Truth About Muhammad and The History of Jihad. His latest book is Did Muhammad Exist?: An Inquiry into Islam’s Obscure Origins―Revised and Expanded Edition.