I think it is clear that the Antichrist will rise to power over a Revived Roman Empire (the EU) and head up a powerful military during the Tribulation Period (Dan. 9:26-27). 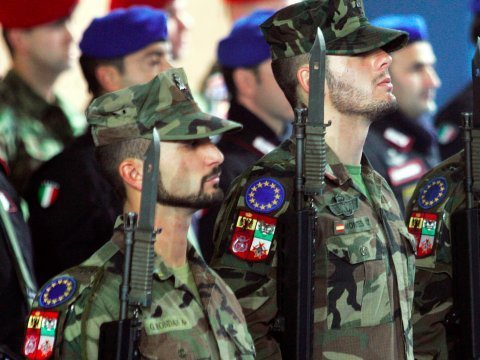 The Antichrist will do according to his own will (exercise absolute power; Dan. 11:36), prosper until the Tribulation period is over (until the indignation is accomplished; Dan. 11:36) and honor the god of forces (Satan; Dan. 11:38).

When Jesus breaks the first seal on the seven-sealed scroll he will go forth conquering, and to conquer (Rev. 6:1-2).

By the time the middle of the Tribulation period arrives people will ask, “Who is like unto the beast? Who is able to make war with him” (Rev. 13:4)?

The EU nations want to be defended, but some have not paid their fair share of the costs. Some have relied upon their membership in NATO to protect them, but they have spent their money on other things.

Donald Trump came on the scene saying he would put America first. He criticized NATO and said it is obsolete.

He indicated that it would be difficult for him to send American troops to defend NATO countries that aren’t paying their dues. He called non-payment a big deal and said it cannot be ignored.

Donald Trump’s amazing November victory caught more than the American pundits by surprise. It exploded like a bomb in EU offices all over Europe.

Nervous diplomats started calling for an EU military again. The president of the EU Commission, Jean-Claude Juncker, said the European Continent cannot always rely on the U.S. to protect it.

It took just two weeks for the EU Parliament to assemble and pass a non-binding resolution that calls for the creation of a European Defense Union.

The EU Commission will meet in December to consider their resolution.

Is this it? Are world leaders finally going to see a strong EU military? Many experts say it as highly unlikely. And they may be right.

But don’t overlook the fact that God’s Word will be fulfilled. He will allow the Antichrist to rise to power and prosper. Satan will be behind what the wicked one does, etc.

God’s ways are beyond our understanding. When the Hebrew children were trapped against the Red Sea who would have thought that God would part the water and let them cross on dry ground?

When God’s appointed time came for the birth of the Messiah, who would have thought that He would be born in a stable instead of a nice Jewish inn?

Who would have thought that a man that has never held public office could win the nomination for president of the U.S.?

Who would have thought that Donald Trump would criticize NATO and it would trigger a call for an EU military?

It reminds us that God said, “My thoughts are not your thoughts, neither are your ways my ways” (Isa. 55:8).

I don’t know whether the world will soon see an EU military or not, but I want to be careful about trying to explain it in human terms because a spiritual war between God and Satan underlies the events that are taking place. And when the appointed time comes God’s Word will be fulfilled.