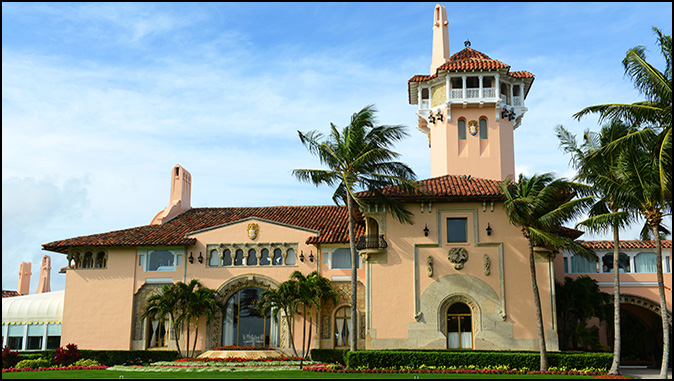 End of the Republic
With the FBI raid on Trump’s home, America has fallen into the abyss.
By Robert Spencer

When the FBI raided Donald Trump’s home on Monday, a key aspect of what made the United States of America great and free has been lost, and likely cannot be recovered. John Adams and Thomas Jefferson detested one another for years before their eventual reconciliation, but neither one used the agencies of the U.S. government to hound, persecute or discredit the other. Other bitter political opponents throughout the history of the republic have never before used the government’s own mechanisms of justice to do injustice to their foes. Joe Biden, Merrick Garland and their henchmen have brought America to a new phase of its history, and it is not likely to be one that is marked by respect for the rule of law or defense of the rights of individual citizens. Instead, we are entering an ugly age of authoritarianism, in which the brute force of the state is used to bend the people to the will of the tyrant.

Trump announced on Monday, “These are dark times for our Nation, as my beautiful home, Mar-A-Lago in Palm Beach, Florida, is currently under siege, raided, and occupied by a large group of FBI agents. Nothing like this has ever happened to a President of the United States before. After working and cooperating with the relevant Government agencies, this unannounced raid on my home was not necessary or appropriate.”

The 45th president is not given to understatement, but the FBI raid on his home is much more than just unnecessary and inappropriate. It is criminal. The FBI that was heavily involved in trying to frame and destroy Trump in the Russian Collusion hoax is now trying once again to destroy him, apparently by claiming that he improperly took classified material from the White House. They never cared when Hillary Clinton misused classified material on a grand scale; what is the difference? They’re also likely trying to find something to link him more firmly to the January 6 “insurrection” that never was. The Left’s January 6 narrative has been full of holes from the beginning: Trump told the demonstrators to proceed peacefully, the people who entered the Capitol had no weapons, and no one had sketched out any kind of plan to do what the Left continues to claim that Trump was trying to do all along, overthrow the government and rule as a dictator.

But Joe Biden’s handlers are desperately afraid that Trump will return to the White House on January 20, 2025 and that things will go harder for them next time than they did during his first term. They’re afraid that a vengeful Trump will do a genuine and thorough housecleaning of the desperately corrupt and compromised Washington bureaucracy, and that many of them will, quite justly, end up out of power, and some of them will, even more justly, end up in prison. So they’ve determined to pre-emptively do the same to Trump. If they can’t actually find anything to prosecute him for (and Lord knows they’ve tried, this is the most investigated and poked and prodded and scrutinized man in American history, and still those who hate him have nothing), then at very least they hope to taint Trump so completely in the eyes of the distracted and indifferent public that they will have a fighting chance in 2024.

This is banana republic stuff. This is the kind of thing that moved Woodrow Wilson to intervene militarily in Cuba, the Dominican Republic, Haiti, Honduras, Mexico, and Nicaragua, explaining: “We are friends of constitutional government in America; we are more than its friends, we are its champions. I am going to teach the South American republics to elect good men.” Wilson was an authoritarian scoundrel and one of the worst presidents we have ever endured, but much as he hated Theodore Roosevelt and feared that he would be reelected to the presidency in 1920 (instead, Roosevelt died in 1919), Wilson never had rogue government agents raid Roosevelt’s home looking for something they could use to pin some crime on him.

Merrick Garland recently signaled that something like this was in the offing, when he emphasized that no one was above the law and anyone could be prosecuted. No one is above that law, that is, except Hillary Clinton, and Hunter Biden, and all the FBI officials who have been implicated in the Russian Collusion hoax, and all the other Leftists who have escaped and will continue to escape prosecution because they hold what the elites consider to be acceptable political opinions.

The two-tier justice system that aggressively prosecutes conservatives while turning a blind eye to Leftists who have committed similar or worse crimes is now out in the open. Trump did nothing, but the FBI will find some crime for which the Justice Department will prosecute him. Hillary Clinton and Hunter Biden did a great deal, but none of it matters to corrupt officials who share their worldview.

The lesson is clear: in America today, in the corrupt kleptocracy of Joe Biden, you have to have the right opinions. Then all doors will open for you and you can even break laws with impunity, and have no fear of prosecution. But if you dare to dissent from the opinions of the elites, prepare to be hounded by the new super-IRS and the weaponized FBI, and you’ll face raids, and prison, and who knows what else is coming.

Many conservatives are saying that this ensures Trump’s victory in 2024. But what makes them think that this corrupt regime will allow the man whom they fear and hate above all others return to the White House? It’s clear now. They will stop at nothing.

This is no longer a republic, except of the banana variety. It may be a republic again someday, but for now, the great American experiment is over. Born July 4, 1776 in Philadelphia, died August 8, 2022, in Mar-A-Lago, at the hands of Joe Biden, Merrick Garland, and Christopher Wray.