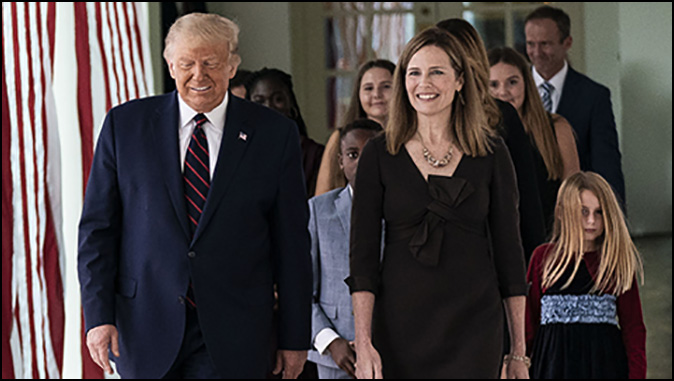 Donald Trump’s Supreme Court Legacy
When the Left is miserable it’s a good day for America.
By Derek Hunter

If you haven’t been living under a rock for the past 6 years, one thing you’ve noticed is how Donald Trump being elected President of the United States absolutely broke the political left in this country. Admittedly, they were not that stable of a group to begin with, so driving them crazy didn’t require much gas. That having been said, even 2 years after he left office, Donald Trump’s legacy is peeing in the Cornflakes of committed progressives from coast to coast, and it’s a glorious thing.

You may not be into schadenfreude the way I am, and for when normal people suffer I don’t recommend it. But you have to realize that leftists are horrible people actively seeking to harm this great country, so when they are miserable it is a good day for America. And this week saw the anti-American mutant army wildly miserable.

On guns, the Second Amendment means what it says, as does the 14th Amendment. It’s always amazing to me how some people can read plain words and not understand them, while at the same time create new pronouns and genders every morning they wake up and expect the world to conform to them. Language is not difficult, being an idiot is. And the Supreme Court Thursday smacked the left across their collective faces with the cold, dead fish of reality the Founding Fathers weren’t just tossing a word salad when they wrote the Constitution and Bill of Rights, they actually meant those things.

Of course, Thursday was just the appetizer; the main course came Friday when, after an extensive near-30-year word search, the Supreme Court finally admitted that the word “abortion” is not in the Constitution (not even in the subtext or early drafts) and overturned Roe v. Wade.

Anyone with half a brain knows this simply sends the issue back to the states, allowing the people to decide what, if any, restrictions to place on abortion. Nothing, and I mean nothing, scares a Democrat more than the idea of the people having a say in their own laws and fates. Yes, the left is known for screaming “this is what democracy looks like,” but they’re usually doing it at full volume to prevent someone they don’t like from being able to speak. That is decidedly NOT what democracy looks like, it’s what Germany in 1934 looked like.

Of course, Democrats don’t care about democracy anyway. When not trying to keep citizen led referendums off the ballot by any means necessary, they are suing to overturn initiative results they lost, in defiance of the clear will of the majority of the people. Hypocrisy, thy name is progressive.

The abortion decision sent the left into a tailspin from which they will need years to recover. Chuck Todd, the gingerheaded boob serving as the political director of NBC News (to the extent they do news anymore) said Friday, “We’re used to the Supreme Court granting rights…” He then went on to say, “This is a specific right being taken away.” First off, the Supreme Court should never “grant rights,” that’s not its job. Second, if you believe any branch of government should grant rights, then you have no argument against them taking them away too. If rights come from government, government can decide, on a whim, what rights you get at any given moment.

The beauty of the Bill of Rights is it acknowledges the rights with which we were born, rights from God, and expressly says government can’t mess with them. Nothing in there implies these are rights ceded to us by government. If you believe as Chucky does, you have no leg to stand on when the government goes in a different direction.

Naturally, the mutant mob took to the streets. Every once in a while they need to leave their parent’s basements and get some sun.

It never fails that the “womyn” most upset by anything having to do with abortion are the least likely to ever need one anyway. Bipedal saltpeter, these 18-wheeler driving C.H.U.D.s of the left are wildly upset tonight, and by that I mean more than the usual – when they catch a glimpse of themselves in a reflective surface, choke back down the reflexive vomit and realize life isn’t fair.

Getting pregnant is as easy to avoid as being hit by a train – if you stay off the tracks your chances of a speeding Amtrak headlight being the last thing you see go down to almost zero. But somehow these morons don’t seem to understand that. There are sections of stores dedicated to preventing pregnancy, medicines that make it near impossible. Surgeries snipping and tying things, lotions and creams, not to mention any of the other options that keep the miracle of life at bay. If you’re too dumb to navigate through the smorgasbord of options to prevent pregnancy, you’re too stupid to be having sex.

That level of stupidity is not Donald Trump’s fault, liberals did that all on their own.

Speaking of stupidity all on their own, Ana Navarro, the chunky CNN token fake conservative, sometime The View fake conservative, and destroyer of buffets added another title to her resume Friday: worst step-grandmother ever. Luckily, Ana is too old to have kids of her own, but her sad sack husband had a family before losing a bet and marrying Navarro. Those kids had kids of their own, making Navarro a step-grandmother.

On CNN Friday, the detestable Navarro not only told of how her own brother, who is developmentally disabled, was a burden on her family, implying they’d been better off had he been aborted, she also took swipes at 2 of her step-grandkids.

One kid has Down Syndrome, the other autism. Navarro basically says their families would also be better off had they been aborted. “Their mothers, and people who are in that society, who are in that community, will tell you that they’ve considered suicide because that’s how difficult it is to get help,” the scumbag said about her own family. How does her husband face his kids and grandkids with this thing on his arm at the next family gathering?

Donald Trump broke Ana Navarro (though she was always defective) just like he broke the left. His legacy was always the Supreme Court, delivering Justices who actually lived up to their billing, unlike every other Republican President. Whatever else you think of the man, he did that. And that’s a legacy no amount of show trials, screaming pundits, low-rated cable networks, or anything else can take away.

Biden Will Let Socialist Drug Cartel Drill, Before He’ll Let U.S. Drill This is what…