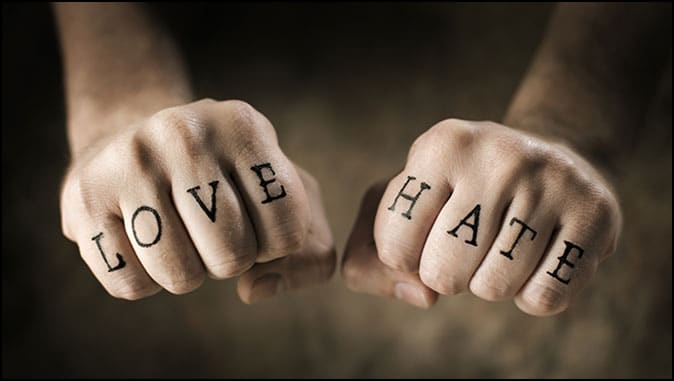 Does a Diverse, Tolerant, and Just Society Call Names or Debate Freely?
By Laurie Higgins

Leftists also teach children and teens that those who hold conservative views on matters related to sexuality hate or fear homosexuals and cross-sex passers. Such lies undermine the possibility of dialogue and relationships between people who hold different beliefs. Neither unity nor even civil co-existence can be achieved unless people stop calling others hateful names and spreading lies. We should be able to at least acknowledge that many—perhaps most—people on both sides of the debate have good intentions.

While leftists claim they want a diverse and tolerant society, they don’t act like it. A diverse society will by definition include people with diverse religious, political, moral, ethical, ontological, teleological, and epistemological views. In a tolerant society, people will tolerate—that is, “endure,” “forbear” or “leave unmolested”—the expression of views with which they disagree and the people who express those views.

And those who are committed to tolerating diverse views, respecting those who hold them, and protecting free speech surely wouldn’t have the goal of preventing people with different beliefs from making a living. If a condition for employment is holding a certain set of moral views on sexuality, then we are no longer a free society.

Like leftists, conservatives seek a just society, but how the two groups view justice differs based on prior assumptions. Same goes for equality. Before anyone can rationally discuss whether we live in an unjust society in which different groups are denied equality, we need to define terms and discuss presuppositions.

No homosexual or cross-sex identifier is denied any fundamental civil right, nor would any conservative want them to be. They have the right to vote, speak, peaceably assemble, and exercise their religion freely. So, when they shout about injustice and inequality, they’re not referring to basic civil rights.

Next, the criterion regarding consanguinity (i.e., blood kinship) will be jettisoned. If love is love and marriage has no connection to either sexual difference or reproductive potential, there remains no justification for prohibiting any two or more relatives of the same or different sexes from marrying.

Is America unjust because our legal definition of marriage includes criteria regarding number of partners and blood kinship? Is it unjust to prohibit plural and incestuous marriage? Are polyamorists and those who experience “Genetic Sexual Attraction” being denied a fundamental right? Does a commitment to equality require a particular definition of marriage?

Rather than defining terms, leftists resort to bad analogies, and in so doing engage in category confusion. Leftists continually compare homosexuality and cross-sex passing to race without identifying the specific ways homosexuality per se or cross-sex passing per se correspond to race (or skin color) per se. Are those comparisons sound? Do they make sense?

Homosexuality and “transgenderism” are constituted by subjective, internal, and often mutable feelings and volitional acts. Race (or skin color), on the other hand, is in all cases objective, 100 percent heritable, immutable, and has no behavioral implications. While the analogies are politically efficacious, are they sound?

Leftists bandy the word “equality” about continually, but how often do they discuss the nature of the conditions to which the idea of equality applies? Surely, commitments to equality do not demand that all conditions—particularly conditions constituted by subjective feelings and volitional acts—be considered identical or morally equivalent.

Let’s replace homosexuality with another condition that is similarly constituted: polyamory. Because society largely disapproves of polyamory and our laws do not permit five people to marry (yet), do we have an unequal, unjust society?

Or let’s replace cross-sex identification with “trans-ableism.” Is society unjust for not amputating healthy legs or severing the spinal columns of those who identify as amputees or paraplegics respectively? Are those who oppose such “treatments” hateful bigots?

Lots of questions that deserve discussion, but discussions can’t happen if leftists refuse to define terms, allow examination of presuppositions, or tolerate debate, preferring instead to hurl epithets and get people fired.