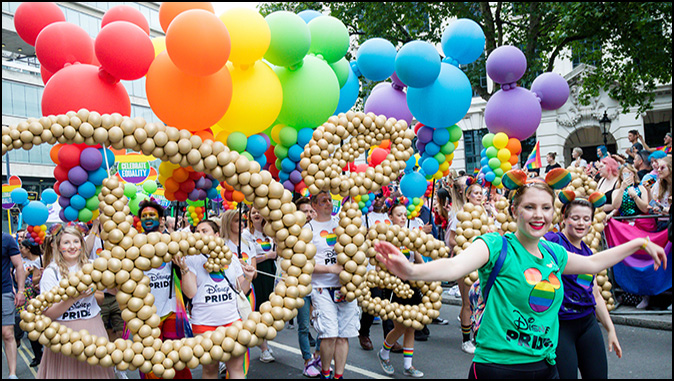 Disney’s Child Sacrifice
The “family entertainment” giant bows down to the deities of “woke” ideology.
By Joseph Hippolito

The world’s most respected producer of family entertainment has decided to sacrifice children to the deities of “woke” ideology.

Disney — which gave the world Mickey Mouse, Disneyland and other beloved aspects of popular culture — announced it will actively promote normalizing homosexual and transgender identity while resisting any opposition to the LGBTQ agenda.

The entertainment giant made that decision as part of its fight against two Southern governors trying to protect children and reinforce parental authority. Disney opposed a Florida bill, which Gov. Ron DeSantis signed March 28, that prohibited school authorities from encouraging “classroom discussion about sexual orientation or gender identity in primary grade levels.”

Meanwhile, Disney joined other corporations such as Apple, Facebook, Google and Microsoft in opposing Texas Gov. Greg Abbott’s order to investigate sex-change operations on children as illegal and possible child abuse. In a Feb. 22 letter the governor sent to Jaime Masters, commissioner for the Texas Department of Family and Protective Services, Abbott wrote:

“It is already against the law to subject Texas children to a wide variety of elective procedures for gender transitioning, including reassignment surgeries that can cause sterilization, mastectomies, removals of otherwise healthy body parts, and administration of puberty-blocking drugs or supraphysiologic doses of testosterone or estrogen.”

“The company said the task force will enlist the help of experts to develop a concrete plan to ensure Disney is ‘a force for good’ for LGBTQ+ communities, especially children and family,” Reuters reported March 22.

As part of that commitment, a same-sex kiss cut from the new film Lightyear, part of the Toy Story franchise, would be restored.

“We know the moment requires urgency, and words are not enough,” Chapek said. “So we are taking some actions right now.”

Chapek’s comment reflects his desire to appease an increasingly “woke” base of executives, employees and contractors who went apoplectic on social media when Florida’s legislature passed the aforementioned bill March 9. The CEO contacted De Santis that day “to express our disappointment and concern that if the legislation becomes law, it could be used to unfairly target gay, lesbian, non-binary and transgender kids and families,” Chapek said.

“We were opposed to the bill from the outset,” he added. “But we chose not to take a public position on it because we thought we could be more effective working behind-the-scenes, engaging directly with lawmakers on both sides of the aisle.”

DeSantis replied the next day.

“When you have companies that have made a fortune out of being family-friendly and catering to families and young kids, they should understand that parents of young kids do not want this injected into their kindergarten classroom,” he said. “In Florida, our policies are going to be based on the best interests of Florida citizens, not on the musing of ‘woke’ corporations”

In response, Disney employees who supported the LGBTQ agenda staged walkouts. ESPN, which Disney owns, even interrupted its coverage of the NCAA women’s basketball tournament March 18 with two minutes of silence to support transgender athletes. On March 22, ESPN followed with a Twitter thread that began with this statement:

“ESPN believes in inclusivity and denounces legislation and actions across the United States that infringe on any human rights. We stand with our LGBTQIA+ colleagues, friends, families and fans.”

“Whenever I could, I was just basically adding queerness,” Raveneau said. “No one would stop me, and no one was trying to stop me.”

Disney is so committed that not only is it removing “gendered greetings,” as Diversity and Inclusion Manager Vivian Ware described them. It purportedly plans to create 50 percent of its future characters with homosexual or transgender identities.

Instead of welcoming visitors to Disneyland and Walt Disney World with “Ladies and gentlemen, boys and girls,” Ware said she trained employees to say, “Hello, everyone,” “Hello, friends,” “Dreamers of all ages” and similar phrases. Ware added she is training employees in concessions and souvenirs to be more aware of gender identity.

“We don’t want to just assume because somebody might be presenting as female in our interpretation, that they may not want to be called ‘princess,’ ” Ware said. “Let’s think differently about how we really engage with our guests in a meaningful and inclusive way that makes it magical and memorable for everyone.”

Karey Burke, president of Disney General Entertainment Content, emphasized more overt homosexual and transgender identities for future characters, with perhaps as many as 50 percent representing the alphabet community.

“One of our execs stood up and said, ‘You know, we only had a handful of queer leads in our content,’ ” Burke said. “I went, ‘What? That can’t be true!’ And I realized, ‘Oh, it actually is true.’ We have many, many, many LGBTQIA characters in our stories and yet, we don’t have enough leads and narratives in which gay characters just get to be gay characters and not have to be about gay stories. That’s been very, very eye opening for me.”

Such a philosophy permeated the March 21 meeting, as the Daily Wire’s Megan Basham reported. After Chapek spoke, “a panel of LGBT activists gave a talk one Disney staffer said was ‘about wanting Disney to indoctrinate kids,’ ” Basham reported.

The staffer described similar presentations “as a strategy session for circumventing the will of mothers and fathers,” Basham reported.

“These activist employees and outside organizations recognize Disney’s cultural significance,” the employee told Basham. “They want to use the company to make an end-run around parents through content creation and political pressure. They see it as their mission to rescue the next generation from their conservative parents.”

Rescued for what? The sheriff’s department in Polk County, Fla. provides a possible and disturbing answer.

On March 16, the department announced that a sting operation resulted in 108 suspects being arrested for human trafficking. Four worked for Disney.

A 27-year-old lifeguard at Disney’s Polynesian Village Resort at Walt Disney World allegedly sent sexually explicit pictures and messages to an undercover agent posing as a 14-year-old girl. Another suspect was a 24-year-old man who worked at a restaurant in the park. Two others were a 45-year-old IT expert and a 27-year-old software developer.

Disney has long had problems with child predators in its work force, as Ruso wrote March 31 for City Journal. In 2014, for example, CNN published its six-month investigation showing that at least 35 Disney employees were arrested for sex crimes against children in the previous eight years. Charges included owning child pornography and arranging to meet children and teenagers for sex.

Yet despite the risks in embracing the alphabet agenda, Burke spoke with the assurance of radical utopians throughout history when she declared, “we just can’t allow each other to go backwards.”

Ironically, by embracing that agenda, Disney is doing more than going backwards. It is destroying its historical identity.

“This is a complete institutional takeover,” the anonymous staffer told the Daily Wire. “Disney is lost.”

Joseph Hippolito is a freelance writer and a regular contributor to FrontPage Magazine. His commentaries have appeared in The Federalist, The Stream, Wall Street Journal, Jerusalem Post and National Post.