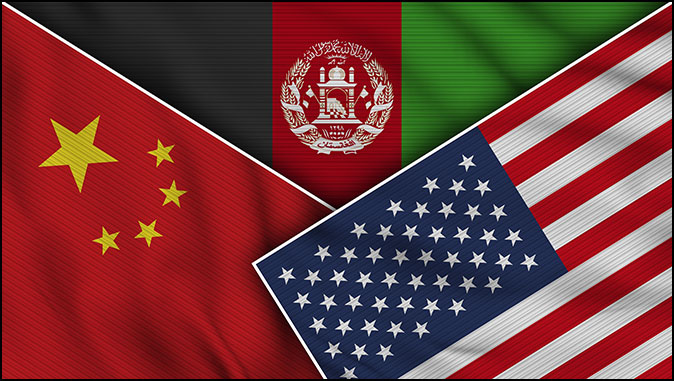 Desert Wars
Who is really the big winner in Afghanistan?
By Michael Ledeen

The Taliban have conquered Afghanistan, and the United States is reeling. So far as we can tell, with the exception of Panshir, Taliban forces dominate the fighting throughout the country, and the reporting from Panshir is incoherent, sometimes favoring one side, sometimes the other. The last time they clashed, the anti-Taliban forces prevailed, and they are hoping for a repeat performance.

Only time will tell whether the Taliban forces have improved dramatically since they defeated the Soviets more than twenty years ago, or whether the anti-Taliban fighters will prove unequal to the new challenge. The United States has done its best, dumping a substantial quantity of weapons and ammunition into Taliban arms. If they prevail, President Biden and his crew will be entitled to lots of credit for having armed the Taliban.

The big winner in Afghanistan is the People’s Republic of China, and it could not have come at a better time. China has been passing through a fundamental transformation, increasing central control over the national culture, purging independent thinkers and doers, and making it clear that Xi Jinping wants a tougher and more bellicose nation under his control. To that end, he has banned effeminate actors from the country’s movie screens.

Xi has called for tighter Chinese Communist Party (CCP) control of business, education, culture, and religion. Companies and the public are under increasing pressure to align with the CCP’s vision, and the young Chinese are constantly drilled in the basic elements of masculinity.

Broadcasters must “resolutely put an end to sissy men and other abnormal aesthetics,” the National Radio and TV Administration said, using an insulting slang term for effeminate men—“niang pao,” or literally, “girlie guns.” After all, Chinese global hegemony will rest on male virtue, not on niang pao, and Xi intends to lay an explicit basis for the new generations. He intends to raise a new generation with the proper attitudes, a surly growl for strangers, and unlimited confidence in the rightness of their cause.

As conflicting reports flow out of the Panshir, it is obvious that there is a lot of killing going on, and it is difficult, if not impossible, to sort out winners from losers. Today there were videos from Panshir, allegedly documenting intense fighting from last night, and audio reports of ongoing gunfire as well. Moreover, there were claims from the State Department taking credit for smuggling an American family by land out of Afghanistan. But a private US group, headed by US veterans of the war in Afghanistan, was taking credit for the operation, and blasting State for ineptitude and cowardice.

Meanwhile, the Chinese Government was announcing plans to restrict viewing of online computer games, declaring it illegal to play between Monday and Thursday, while permitting one hour of play on weekends, on Fridays and on holidays. The scheme was designed in order to facilitate penetration of Chinese computers and download information about non-Chinese users of computer games. It turns out that roughly half of the world’s population are game players, a target-rich environment for would-be penetrators, that the Chinese are eager to infiltrate. Beijing just passed a new maritime reporting requirement that Vice Admiral Michael McAllister, the US Coast Guard’s leading commander in the Pacific, said violated existing agreements and norms.

In fact, McAllister added, if China chose to enforce the requirement, it would “begin to build foundations for instability and potential conflicts.” McAllister had warned that the United States would study the new requirements very carefully before deciding whether or not to comply with them.