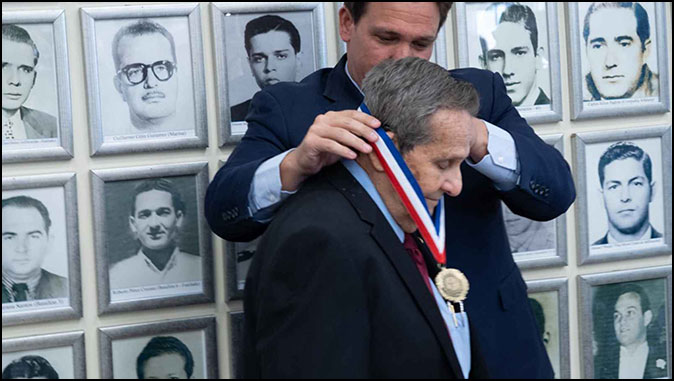 DeSantis Awards Florida’s Medal of Freedom to Che Guevara Captor Felix Rodriguez
“Felix has marked his legacy as one of the bravest fighters for freedom in history.”
By Humberto Fontova

“Felix’s life has been dedicated to fighting communism, to supporting freedom, to supporting liberty, and we appreciate Felix as a brave and courageous freedom fighter,” said Governor Ron DeSantis. “From his service as a paramilitary officer with the Central Intelligence Agency during the Bay of Pigs Invasion to a Colonel in the United States Army at the height of the Vietnam War, Felix has marked his legacy as one of the bravest fighters for freedom in history. I am honored to award Felix the Governor’s Medal of Freedom and may God bless him and the Great State of Florida.”

“Rodríguez said he is concerned about a socialist regime taking control of the United States. That’s beginning to happen, he warned. And he encouraged people to vote in the 2022 election, because losing the House and Senate could lead to what he called the United States of Socialism: “Go out and make sure that we’ll regain those two houses, because that’s the only way that we’re going to save the United States of America,”

Needless to add, no mention from the Democrat-Media Complex about an award for a man who helped take out one of America’s most virulent enemies—an enemy whose fantasies would have left Osama Bin Laden’s, Tojo’s, and Hitler’s in the dust. To wit:

“Against those hyenas there is no option but extermination!” (Che Guevara, 1961.)

“If the nuclear missiles had remained [in Cuba] we would have fired them against the heart of the U.S. including New York City. The victory of socialism is well worth millions of Atomic victims.” (Che Guevara, 1962.)

Fantasies, that is. And it’s the thought that counts. Because as a practical matter — and in military/terror matters — the jackass-doofus-coward historically known as Che Guevara would make the ideal subject for a rollicking slapstick comedy by Sacha Baron Cohen, Saturday Night Live, or Monty Python – if only these people were interested in genuine humor instead of leftist sermonizing.

In fact, simply ignoring an anti-communist hero like Felix Rodriguez isn’t enough for Democrats. Instead they also tried to defame and prosecute him. To wit:

Liberal Democrat John Kerry landed in Congress and immediately rolled up his sleeves and spat on his hands. The Nicaraguan people must end up like the Cuban and Vietnamese! Toward this end the man was tireless.

Soon Senator Kerry was chairing “the Senate Subcommittee on Narcotics, Terrorism and International Operations,” quickly dubbed “the Kerry Committee” by his media cronies and soulmates. Soon it was boasting, “77 instances where the Reagan Administration misled Congress about its policies in Central America!” (I hold here in my hands!)

Lest we forget, it was here that the famous “Iran-Contra investigation” actually started. Soon the lurid accusations spawned an “Iran-Contra Committee “of its own and Kerry pressed ahead with his.

In short order Kerry’s committee was leaking lurid details of a nefarious CIA/Contra drug smuggling plot with a Cuban-American named Felix Rodriguez as the bagman and Vice President George Bush as a silent partner. The commie-crackpot Christic Institute and Institute For Policy Studies served as the Kerry Committee’s advisors. The latter had arranged his earlier Nicaragua fan trip, where he shook the hands and extolled the virtues of Castro-Soviet puppet Daniel Ortega.

The Kerry Committee finally subpoenaed future Pres. of the Bay of Pigs Veterans Assoc. Felix Rodriguez himself. A little background:

As a 19 year-old member of Brigada 2506, Felix infiltrated Communist Cuba weeks before the Bay of Pigs invasion, organizing underground freedom-fighters, planning for the sabotage of key roads and bridges, staying a step ahead of the Castro’s secret police and their KGB handlers and coaches. Almost 70 per cent of his comrades in the infiltration teams died in front of firing squads, after torture. Felix knew the odds. He volunteered anyway.

After the Best and Brightest stabbed the Bay of Pigs freedom-fighters in the back, Rodriguez again foiled the Communist dragnet by slipping into the Venezuelan embassy and escaping a year later to Florida. After the Best and Brightest stabbed them again and twisted the blade with the Kennedy- Khrushchev swindle, Rodriguez, along with hundreds of his Brigada Band Of Brothers enlisted in the U.S. Army.

Later, as a CIA operative, Rodriguez played the key role in tracking down and capturing Che Guevara in Bolivia and was the last to question him. “Finally I was face to face with the assassin of thousands of my countrymen, of hundreds of my patriot friends.”

On the day he gained his U.S. citizenship in 1969 Rodriguez celebrated the honor by volunteering for armed action in Viet-Nam. “I lost the country of my birth to Communism,” he writes in his book, Shadow Warrior. “I know freedom must be protected. And I feel I owe it to my adopted country.”

Felix flew over 300 helicopter combat missions in Viet-Nam, and was shot down five times. He won the coveted Intelligence Star for Valor from the CIA and nine Crosses for Gallantry from the Republic of South Vietnam. Later he battled Communists in El Salvador using a helicopter “mobile strike unit” scheme he developed in Viet-Nam. He flew over 100 combat missions in Central America, captured the FMLF’s top commander and helped crush those Communist- terrorists decisively. All this was volunteer work.

Now a gaggle of grandstanding Congressional paper-pushers presumed to browbeat and cow this man. I’ll quote the heavy metal rockers Judas Priest here. “They had another THING coming!”

Rodriguez was flying combat missions in El Salvador the summer of 1987 when his wife called to say his name was splashed all over the Miami Herald as a cocaine smuggler for the Nicaraguan Contras– and one who reports to Vice President Bush!

Alarmingly (to Democrats) Rodriguez refused what weasel types call “immunity,” for his testimony. And he didn’t miss a beat –naming dates and witnesses, citing documents–he proceeded to demolish every accusation the Kerry Committee made against him.

‘It’s difficult for me to answer questions from a man (you, Senator John Kerry, chairman of the committee) I do not RESPECT!” (Felix Rodriguez testifying for Senate Foreign Relations Subcommittee on Terrorism, Narcotics, and International Operations hearings chaired by Senator John Kerry in 1986. These evolved into the Iran-Contra hearings.)

“Senator (John Kerry) your committee’s slander against me was in every g*d*mmed newspaper after your committee’s last closed hearing! Saying I solicited drug money for the Contras. THAT, senator Kerry, is a D*MNED LIE!…

“I have nothing to hide,” Rodriguez stressed repeatedly. “I’m not ashamed of anything I’ve done. I’ve battled communism since I was 17. I help the Contras, the Salvadoran government. I do so as a volunteer, legally and openly. And if you’re sincere, senator,” he finished up. “You’ll put out a statement to the press about what I said here today. I insist that the American people know about my testimony!”

No such statement ever issued from Kerry’s Committee. So two months later Rodriguez called a press conference in Miami to tell his side.

A full year after leaking the slanders against Rodriguez and after the treacherous, lying swine who made them failed three polygraph tests, The Kerry Committee finally saw fit to allow Rodriguez’ year-long request for an open hearing. They scheduled him as the fifth witness at 5 in the afternoon when the Senate chamber was devoid of reporters and TV cameras. In the near-empty room, Kerry finally mumbled a half-hearted apology.

Abortion Is a Spiritual Battle

Abortion Is a Spiritual Battle By Dr. Jerry Newcombe A national group of Satanists is…

Equity in Medicine is Racist and Lethal

Biden's Latest Mayhem By Lawrence Kadish Originally Published by the Gatestone Institute. It should not…

CAIR Warns of Threat from Jews and ‘FrontPage Magazine’