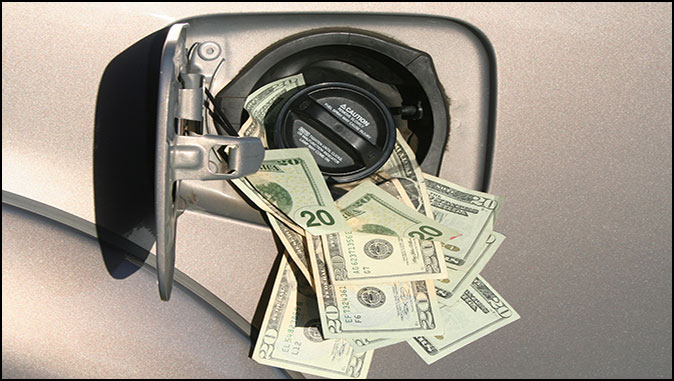 The simplest way to understand a “carbon tax” is that it would ultimately involve tracking everything you do and taxing you for every little bit of it by assembling your “carbon footprint”. At its initial stages, it would tax you indirectly by pricing in its Big Green shakedown into every product and service you use.

If you thought that gas prices and food prices were bad now, imagine them after a carbon tax.

And radical Senate Democrats in hock to Big Green, seeing their $3.5 trillion plot to rob Americans going up in smoke, are getting vicious.

Some House and Senate Democrats, smarting from a move by Senator Joe Manchin III, Democrat of West Virginia, to kill a major element of President Biden’s climate plan, are switching to Plan B: a tax on carbon dioxide pollution.

1. There is no such thing as “carbon dioxide pollution”.

2. A carbon tax is a tax on everything you buy and use.

A carbon tax, in which polluting industries would pay a fee for every ton of carbon dioxide they emit, is seen by economists as the most effective way to cut the fossil fuel emissions that are heating the planet.

Nah. It’s mainly a plot to enrich investors in Big Green industries, which these days include most key Dems and their donors, by taxing everything and claiming that it’s restricting pollution. In fact, little will change except that money will go to the right people.

Ask Al Gore how he got so rich. It’s one of those inconvenient truths.

“I’ve had a carbon pricing bill in my desk for the last three years just waiting for the time,” said Senator Ron Wyden, Democrat of Oregon, chairman of the Senate Finance Committee.

Can there be a carbon pricing bill for Ron’s commutes?

Clearly, the lifestyle of a man who believes that fossil fuels are about to wipe out mankind… and only taxing the middle class death for the benefit of Big Green Finance on Wall Street can possibly save humankind.

But a carbon tax can be politically explosive. Industries could pass along their higher costs, leaving President Biden and fellow Democrats vulnerable to claims that they are raising taxes on the middle class, at a moment when inflation and energy prices are rising.

And it is unclear if Mr. Manchin, whose vote is crucial to Mr. Biden’s legislative agenda, would support a carbon tax.

Bankrupting the coal industry so that New York bankers can sell make money from financial schemes that replace working energy plants with California-style energy setups that brownout and blackout every time too many Teslas are plugged in?

I’m sure Manchin will be totally on board.

As they seek alternatives, White House officials are also weighing a voluntary version of a cap-and-trade program, which would create a market for polluters to buy and sell allowances for a certain amount of emissions.

Nothing actually changes, but some people get paid protection money… to save the planet. Ron Wyden can still fly all around the country, as long as someone gets paid for the “emissions”.

An important part of the policy, Mr. Wyden said, will be to use the revenue for tax rebates or checks for poor and working-class Americans — particularly those employed in the fossil fuel industry.

We’re gonna steal from you and then send you a check for 10% of what we stole from you. For the planet.