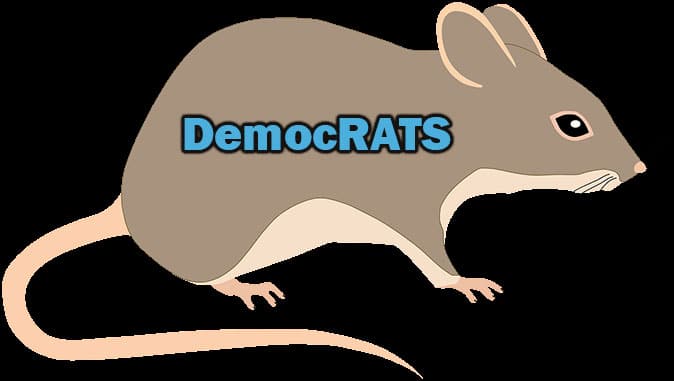 Now the rat race numbers are in. Orkin, the past control company, ratted out the “rattiest cities” and Baltimore has broken through into the top 10 for the first time. Like a rat clambering after a piece of moldy cheese, Charm City leaped up four places to be America’s 8th rattiest city.

Baltimore has never been able to deny that it’s a rat-infested hellhole. But Democrats and their media are good at deflecting with false accusations of racism and then changing the subject.

“If there are problems here, rodents included, they are as much his responsibility as anyone’s, perhaps more because he holds the most powerful office in the land,” the Baltimore Sun had retorted in an editorial after President Trump’s criticism of the terrible conditions in the city.

But there’s one thing that the rattiest cities in America have in common. And it isn’t Trump.

In Chicago, rated as the rattiest city in the country six times in a row, 83% of residents, dead or alive, legal or illegal, human or rat, voted for Hillary. The last time Chicago had a Republican mayor was 1931 and the ratty city has no official Republican members on its city council.

It does however have multiple socialist city council members.

Despite promises by Democrat officials, the city’s rat problem only keeps getting worse.

In May, rat complaints nearly doubled even as officials insisted that there were no more rats.

“It doesn’t mean that there’s a lot more rats. People are seeing them, and they are calling,” Josie Cruz, the Deputy Commissioner of the Bureau of Rodent Control, argued.

Mayor Rahm Emanuel had created the bureau with 120 employees and a $10 million budget.

Cruz has been on this job for at least two decades and tens of thousands of rat complaints keep coming in. Chicago has tried dry ice, spears, and rat birth control. The one thing it hasn’t tried is getting rid of the Democrat rats that have burrowed deep into its municipal government.

If they just registered to vote, the Democrats would never lose Illinois.

What makes Chicago so much more rat-infested than other cities? The answer lies with a corrupt Democrat system in which trash pickup and rodent removal was controlled by local aldermen who could use it for political patronage. The system was finally abandoned in 2013 but the rats had gotten too much of a head start and have burrowed throughout the city.

But that’s just what happens when a city votes for Democrats. First Democrats, then rats.

Hillary Clinton became the first Democrat to get over 70% of the vote in Los Angeles County. Not coincidentally, Los Angeles is once again in second place as the 2nd most rat infested hellhole in the nation. In New York City, Hillary Clinton won 79% of the vote. It’s unknown if the rats voted, but if they did it was probably as a bloc because the city is 3rd in the rat race.

The rat problem in Los Angeles and New York is easily traceable to its vagrant population.

Democrat politicians had embraced living on the street as a protected and subsidized activity. A typhus outbreak followed in Los Angeles. The disease, which is carried by fleas living on rats, centered around Skid Row, the epicenter of the city’s homeless population. The ban on evicting vagrants or preventing them from covering the streets in filth has been a boot for the rats.

And Los Angeles Democrats even took special steps to protect the rats by banning rat poison.

According to Open the Books, there were 44,850 rat sightings in Brooklyn and 33,553 in Manhattan alone. Despite spending $32 million and a trap that drowns rats in liquor, there’s no end in sight. A 2014 study estimated that there were over 2 million rats in New York City. At the rate at which rats reproduce, there will soon be more rats than Democrats in the Big Apple.

In Washington D.C., the 4th rattiest city in America, Hillary Clinton won 86% of the vote. In San Francisco, the 5th rattiest city, 84% of residents voted for Hillary.

It’s only fitting that the rats should be overrunning D.C.

When visiting the Lincoln Memorial before President Trump’s inauguration, I saw a rat scurrying up the stairs. Even the Washington Post, the city’s official rat paper, has run headlines like, “I saw 13 rats in 20 minutes. D.C., we have a rodent crisis.”

To no one’s surprise, Capitol Hill has the third highest number of rat complaints in D.C.

Meanwhile, San Francisco had legalized public vagrancy, resulting in streets that were covered in human waste. Like Los Angeles, Democrats banned some forms of rat poison making it all but impossible to kill them. Exterminators are so in demand that they have waiting lists.

“Poop. Needles. Rats. Homeless camp pushes SF neighborhood to the edge,” the San Francisco Chronicle headlined one story. And then there are San Fran locals like “rat girl” who breeds and releases hundreds of rats in the city.

No wonder, San Fran has as many rats as Democrats.

Detroit is once again the 6th rattiest city in America. Motor City rats are also car enthusiasts and have been known to crawl into cars, chew up the fuel injection system, or nest in the dashboard. One mechanic reported 15 cars damaged by rats in six weeks.

And that might not be the only thing the rats are chewing up.

Too many votes were registered in 37% of Detroit’s precincts during the 2016 election, but it wasn’t enough to hand Hillary a win in Michigan. This time out there might be more rats.

Philadelphia rose 3 places to become the 7th most rat-infested city in the country.

“They look like cats to me,” one resident complained. Another neighborhood described “jumping rats” operating in broad daylight.

82% of Philadelphia residents voted for Hillary Clinton and only 15% for President Trump.

It’s no coincidence that the most rat-infested cities in the country are also the places where Hillary, and any Democrat with a pulse, will walk away with at least 70% of the vote.

Minneapolis, unsurprisingly, Denver, and Baltimore round out the rest of the top 10. What unites all of them is an unswerving allegiance to the Democrats and a massive rat problem. Of the 20 rattiest cities in America, only two have Republican mayors.

Baltimore does indeed have rats. It also has two kinds of elected Democrat officials: those who have already been convicted of a crime and those who have not. Charm City is unique in the number of city officials who have been arrested and tried for assorted forms of corruption.

As long as someone rats them out.

A Baltimore City Health Department report conceded that “the rodent infestation rate in Baltimore is six times the national average.” And, unlike other cities, Baltimore has mostly given up. Rats are the city’s unofficial mascot, showing up on souvenir t-shirts and sweatshirts.

From “Charm City” to The City That Reads” to “The Greatest City in America”, Baltimore has tried out many slogans. But there’s only one that really fits it.

Meanwhile the fallout from Mayor Pugh’s arrest, conviction and sentencing on fraud and conspiracy charges, continues to reverberate through the Democrat establishment.

Rat City has many rats, but maybe they aren’t Baltimore’s biggest problem. Democrats are.