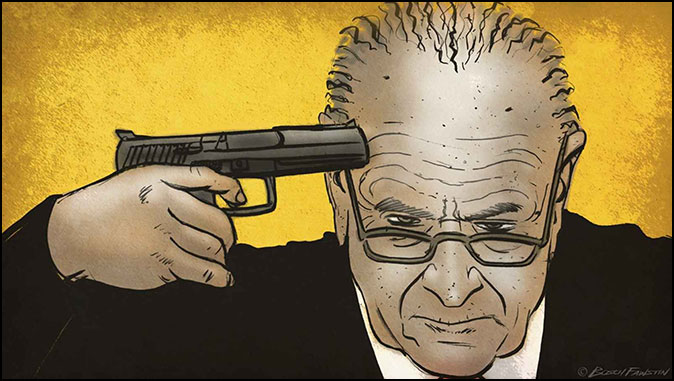 Democrats Must Refuse to Use the Jim Crow Filibuster
If a Democrat makes use of the Jim Crow filibuster, he should be known as a Jim Crow Democrat.
By Daniel Greenfield

“Dr. King knew the Jim Crow filibuster was a barrier to progress & justice, and that remains true today,” Rep. Ayanna Pressley tweeted. “To honor his legacy and claim our place on the right side of history, we must abolish the filibuster.”

If this is true, and we must assume that Pressley believes it to be so, she and all Democrats should immediately commit to refusing to make use of the filibuster under any circumstances.

Otherwise they might be kicked out of the Right Side of History Bar & Grill.

It is shameful that over 50 years after Martin Luther King Jr. was assassinated by a supporter of Alabama Democrat Governor George Wallace some Democrats still continue to utilize the filibuster. Now that the Democrats have officially denounced the filibuster as the work of Jim Crow (even though it actually originated with anti-slavery Whigs like Henry Clay attacking pro-slavery Jacksonians), it’s time for them to live up to their standards and reject the filibuster.

Martin Luther King III demanded that Senator Sinema see to it that “the Jim Crow filibuster does not stand in the way” of Democrat plans for permanent majority rule. Because if there’s anything his father stood for, it was the unambiguous right of the majority to rule over the minority.

Obama, as usual, got all of this started when he insisted that, “if all this takes eliminating the filibuster, another Jim Crow relic”.

Confusingly, Democrats keep relying on this Jim Crow relic, most recently when they blocked Senator Ted Cruz’s sanctions on Putin’s European pipeline possibly because, to play by their rules, Vladimir has tapes of them with micturating prostitutes in a Moscow hotel room.

It’s unfathomable that at a time when we are courageously toppling the statues of anyone who lived in the 19th century (never mind the 18th century) that Democrats cling to this vestige of Jim Crow in order to protect Russian pipelines, illegal aliens and abortion, and also to stop Senator Tim Scott’s police reform legislation. Truly the Dem filibuster is a relic of Jim Crow.

Democrats, who have called this dreadful issue to our attention, must lead the way.

When they are in the minority (which is likely to happen quite soon) they should make it clear that they will refuse on principle to make use of the filibuster to oppose Republican legislation.

To do otherwise would make them complicit in Jim Crow, systemic racism, and other social justice buzzwords that I am sure they were wholly and entirely sincere about invoking.

The Democrats must make it clear that they will have no part in the Jim Crow filibuster starting today. Even if they can’t abolish it, they must show their moral superiority by refusing to trifle with it. If there’s anything that the civil rights movement teaches us, it’s that the minority must never object to the rule of the majority. And by refusing to employ the Jim Crow filibuster, they will live up to the true legacy of the civil rights movement by abandoning minority rights.

It’s what Martin Luther King Jr. would have wanted. According to them.

Only the most ridiculous racists would believe that there is any value whatsoever in allowing minorities to obstruct the will of the majority and as we celebrate Martin Luther King Jr’s birthday, we should be mindful of his words in his Letter From a Birmingham Jail, “A just law is a code that a numerical or power majority group compels a minority group to obey”.

Actually, King wrote that, “An unjust law is a code that a numerical or power majority group compels a minority group to obey but does not make binding on itself.” But, much like his “content of character” quote and the filibuster, that’s inconvenient. So we’ll just get rid of it.

And if the Democrats want to disprove it, all they have to do is reject the Jim Crow Filibuster.

If the filibuster really is, as Common Dreams, the Sierra Club, the Associated Press, the For the People Project, Robert Reich, the Democracy Initiative, Common Cause, Rep. Pramila Jayapal, and Senator Brian Schatz falsely claim, the “Jim Crow Filibuster”, how can Democrats possibly justify continuing to make use of it?

Would Democrats make use of Jim Crow water fountains or buses? How can they use the Jim Crow Filibuster then?

If Senate Democrats won’t listen to these idiots and front groups for radical billionaires, won’t they listen to Rob Reiner who pleaded with senators to, “get rid of the Jim Crow filibuster, and save Democracy. We’re watching it slip away before our eyes.” As an oppressed white California millionaire famous for playing a television buffoon, he knows what he’s talking about.

Democrats must live up to their principles and turn their backs on the Jim Crow Filibuster.

Otherwise people will begin to suspect that they’re pathological liars exploiting the traumas of one of the most difficult eras in our history in order to seize power and make some money.

And that would not be very nice.

From this day forward, if a Democrat makes use of the Jim Crow filibuster, he or she must be forever known as a Jim Crow Democrat. After having given themselves ample warning of its racism, their determination to continue making use of the filibuster can be seen as nothing less than complicity in the systemic racism that has characterized their party since its origins.

This is no laughing matter.

Democrats have shamelessly weaponized racism on both sides of the table. They have shown absolutely no hesitation in hurling the worst possible accusations of racism if there’s something in it for them. And they’ve done it in the most nakedly hypocritical ways possible. The only thing to do is to hold them accountable for their talking points even after they’re no longer convenient.

Or especially if they’re no longer convenient.

“Words matter,” as Obama said a long time ago before he decided that they didn’t after all.