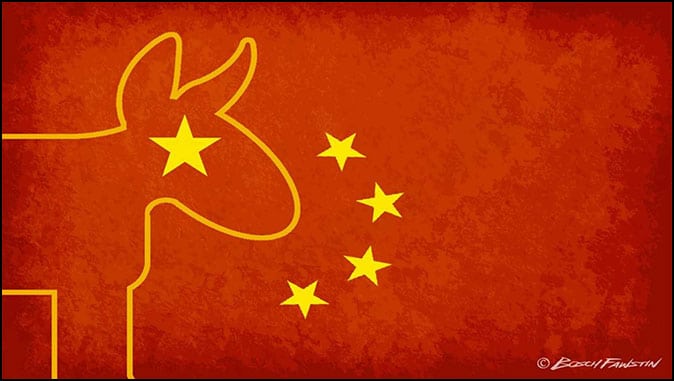 On Tuesday, Houston firefighters arrived at 3417 Montrose Boulevard. Neighbors had reported smoke and a burning smell at the Chinese consulate. The consulate, which had been given 72 hours to close by the State Department, did not let them in even as the smoke continued to waft into the summer air.

“We have directed the closure of PRC Consulate General Houston, in order to protect American intellectual property and American’s private information,” the State Department had warned.

The Houston consulate had become notorious for trying to intimidate American elected officials in Texas and nearby states, as well as American energy companies, especially those doing business in Asia. Some have also linked the Houston consulate to Chinese espionage against American tech and medical firms.

FBI investigations into the Houston consulate involved theft of medical research, recruiting researchers to get at scientific secrets, and forcing Chinese nationals to return to the People’s Republic of China.

Why would the People’s Republic of China have thought that Houston would be a safe base for spying on and intimidating Americans? Houston and Texas Democrats quickly rushed to provide the answer.

Rep. Al Green, who had hosted a luncheon at the spy consulate, accused President Trump of racism.

“Don’t give the impression, please Mr. President, that they are all spies,” Green whined. “My appeal is to the president to understand that his words take on a meaning that can be harmful to other people.”

Rep. Green then went on to suggest that Trump had endangered his constituents by referring to the pandemic as the ‘China virus’, and suggested that Trump’s actions might be leading to “more anti-Asian American violence, or worse, internment.”

While shamelessly playing the race card, for a race he doesn’t belong to, the Democrat did not discuss his own collaboration with the spy consulate.

Rep. Green had co-hosted a Houston press conference with Consul General Cai Wei of the spy consulate, whom he described as a friend, with Chinese state media in attendance, at which the Democrat urged local residents not to worry about the virus, and described himself and Wei as a “committee of two”.

The Houston Democrat boasted that the enemy consulate was close enough for him to walk to.

That’s the same Wei who had been accused of using fake identification to get Chinese nationals through the airport, with whom Rep. Green, an American official, had been meeting with on a regular basis.

Texas state representative Gene Wu, who had also been at the press conference, warned that, “in retaliation, China may basically stop all the investments and tell companies to pull out of here.”

Green and Wu were far from the only Democrats playing defense for the Communist dictatorship.

Amid reports that a fugitive spy wanted by the FBI is being harbored by the Chinese consulate in San Francisco, the inescapable reality is that foreign spy compounds operate in Democrat sanctuary cities.

The Trump administration had already ordered the shutdown of the Russian consulate in San Francisco over its espionage. And the Chinese consulate appears as if it will be next. But if the Chinese consulate in Houston was able to garner the support of Democrats at the local and national level, the situation in San Francisco is expected to be much worse because of Chi-Com infiltration of California Democrats.

Chinese intelligence officials at the San Francisco consulate had successfully recruited a staffer at Senator Dianne Feinstein’s San Francisco office and the situation at the local level is much worse.

And Democrats, instead of supporting their country, are once again undermining it in favor of China.

The same Democrat officials who had castigated President Trump for not trusting the “intelligence community” are the ones rejecting intelligence findings about China’s spy networks.

Senator Angus King suggested that the move was a political stunt by President Trump. “Is it really about confronting China, or does it have something to do with an election in four months?”

Former Senator Max Baucus, Obama’s ambassador to the Communist dictatorship, has falsely claimed that the closure was “electioneering”.

“This is the wrong way to handle it,” Baucus wheedled. “If Pompeo thinks he is going to quote ‘change Chinese behavior,’ he is gravely mistaken.”

Baucus’ China rhetoric has, in recent months, tipped into blatant PRC propaganda, when he compared Trump to Hitler for opposing the brutal dictatorship in an interview with a Chinese propaganda outlet. Baucus has a consulting firm that works with Chinese businesses, and sits on the boards of several Chinese companies. The media outlets who have had Baucus on have not disclosed his ties to China.

“There are a lot of very responsible people in America who know this China-bashing is irresponsible and we will pay a price if it continues. That is all I am saying,” he had warned.

The Democrat has claimed that relations with China will improve if Biden wins the presidency. That’s not surprising since Biden and Baucus are good friends, and Baucus got the ambassadorship due to Biden.

Biden’s China ties have made it impossible for Democrats to confront the Communist dictatorship. Instead they’ve decided to accuse President Trump of closing the consulate as an election stunt even though it’s only July and the closure it hardly likely to have any meaningful impact on the election.

Instead of standing with America, the Democrats are trying to shift the onus to President Trump.

“The White House must be transparent and show that it is taking smart and thoughtful action, rather than engaging in brash foreign policy,” Rep. Lizzie Fletcher complained.

Meanwhile local Democrats like Rep. Al Green, and local Houston media, are treating the consulate closure as a hate crime perpetrated by President Trump in order to persecute Asian-Americans.

Gordon Quan, a former Houston City Councilman, contended that, “to have the consulate close, to have accusations being made that this is the hotspot for spying, just creates a further cast upon the loyalties of Chinese Americans.”

And the Chinese Communist propagandists have adopted the familiar playbook of the Left, complaining about racism, and whining that PRC embassies are facing bomb threats and angry messages. This propaganda is coming from a brutal regime which has engaged in genocide, ethnic cleansing, and the ruthless suppression of political dissent, ethnic and religious minorities, and anyone who gets in its way.

Chinese Communist consulates in America, including in Houston, have been used to intimidate Chinese residents in America, and to suppress political protests against China in this country. The Communist regime’s diplomatic corps has organized Chinese students to shout down, threaten, and even physically intimidate political opponents on campuses and even off them in San Francisco.

And yet, Democrats and the media insist on treating the Chinese Communist regime as the victim.

The Democrats are more loyal to their hatred for President Trump than they are to America. And even in the face of blatant enemy action, they choose the People’s Republic of China over the United States. A growing number of Democrats have also been directly or indirectly compromised by the enemy regime.

And that makes President Trump’s crackdown on spy consulates in Democrat cities all the more urgent.

When the State Department closed the spy consulate in Houston, Democrats had to choose between standing with Communist China or standing with America. They chose China and they chose treason.

How I Define the NFL Protest

How I Define the NFL Protest By Daymond Duck Assimilate; reverse tower of Babel. On…