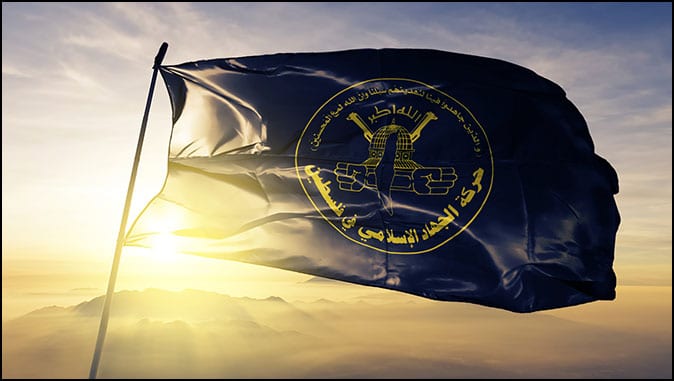 Rasha Mubarak claims there is a “strong dislike” of her in the Democratic Party. In October, the Party canceled an event that she was featured in, due to her participation. Mubarak says the party’s disdain for her is due to “Islamophobia” and “anti-Palestinian” prejudice, but given her support for Palestinian terrorists and her extreme bigotry aimed at Jews and Israel, Mubarak’s victimhood appears only to be an excuse to cover up for her insidious behavior. And she persists in doubling down. On November 11th, Mubarak once again embraced terror, when she used her social media to promote a “prominent” member of Palestinian Islamic Jihad (PIJ).

Maher al-Akhras, whose hunger strike has been widely reported, has been held prisoner in Israel, since his arrest this past July. The Shin Bet suspects him of being a “prominent Islamic Jihad activist.” According to the Asra Media Office (AMO), a Palestinian prisoner rights advocacy group, whose spokesman, Ali al-Maghrabi, is also a spokesman for the Hamas Office of Prisoners’ Affairs, al-Akhras is a PIJ leader. One photo shows him next to a PIJ flag, wearing a PIJ scarf. Other photos of him contain the PIJ logo appended to them. Al-Akhras has been arrested on at least five separate occasions for involvement in terror-related activities.

“FREE THEM ALL” – That is the caption atop the al-Akhras drawing Rasha Mubarak tweeted. The drawing depicts al-Akhras lying in bed, smiling as a little girl hugs him. It is a cynical propaganda ploy aimed at generating sympathy, by presenting Al-Akhras in a benign light to those unaware of his involvement in a brutal terrorist group that is responsible for the murders of over 100 innocent people, many via suicide bombings. Mubarak’s endorsement to free him and other killers is but one manifestation of her own psychotic rage and pathological rejection of all civilized norms.

This is not the only time Mubarak has shown support for Palestinian terrorists. This past June and July, Mubarak posted memorials onto her social media for car-ramming terrorist Ahmed Erekat, who was shot and killed after attempting to run over an Israeli border officer stationed at a checkpoint. At the end of the 2014 Israel-Gaza Conflict, along with photos of a jubilant Hamas, Mubarak tweeted, “Thousands of people celebrating in the streets of Gaza for the victory. Alhamdulillah. #VictoryForGaza.” Mubarak has promoted material from Hamas-related media, and she has personally been affiliated with the Hamas-linked groups CAIR and Islamic Relief.

For nearly a decade, Mubarak has been pushing the notion that Israel has no right to self-defense. She did it in 2019, when Hamas launched more than 600 rockets into Israel leading to the deaths of four civilians, and Mubarak tweeted against anyone who would dare defend Israeli retaliation, including Nikki Haley, Bill de Blasio, and The Ellen Show producer Andy Lassner. She did it in 2013, when she flippantly posted on Facebook that US diplomats mouth the words “right to defend itself,” regarding Israel, “when they snore.” And she left no room for debate, in 2012, when she tweeted, “#LiesImTiredOfHearing Israel has the right to defend herself.”

Mubarak has organized anti-Israel events that have devolved into the worst of anti-Semitism, where Jews have been labeled “terrorists,” “baby killers” and “Jesus killers.” In September 2013, Mubarak ridiculed Jews, herself, when she posted a report onto her Facebook page discussing how Orthodox Jews had asked the Israeli government for “beard-friendly gas masks,” a matter that our own US military has dealt with. About the report, which featured the side profile of an observant Jew with a long beard and side curls, Mubarak mockingly wrote, “Seriously? No seriously! Ufff… Lol…”

Mubarak is currently National Committeewoman for the Florida Young Democrats (FYD). She has served in the position, since June 2019. That same month, she was awarded ‘Florida Young Democrat of the Year.’ Images of her can be seen on the homepage of the FYD official website. These things aside, there is reason to believe that the party has begun to tire of her extremism.

On October 17th, a Muslim activist GOTV event sponsored by the Florida Democratic Party was canceled by the party. The reason given for the cancellation was that the event was featuring Mubarak as a speaker. This was acknowledged by Nadia B. Ahmad, a delegate to the DNC and co-founder of the Muslim Delegates and Allies Coalition, the group organizing the event and whose goal is to elect Democrats, and Mubarak, herself. Ahmad labeled the Democratic Party “vile and calculating” for taking such action. And mimicking Mubarak’s ‘victim card,’ FYD released a statement accusing the Democratic Party of not “standing up to racism and bigotry.”

Rasha Mubarak’s repeated claims of victimhood and “Islamophobia” are absurd, and her support of terrorism is obscene. This author has exposed countless instances of her fanaticism. Her promotion and memorializing of terrorists and her obsessive and virulent hatred of Israel and Jews have crossed all red lines.

The fact that Mubarak holds an official position within the Democratic Party and was recognized by its members with an award makes the party complicit in her behavior. And while the party has taken a positive step by shutting down an event, the failure of party leaders to condemn Mubarak publicly and remove her from party ranks can only mean that she reflects their own views.