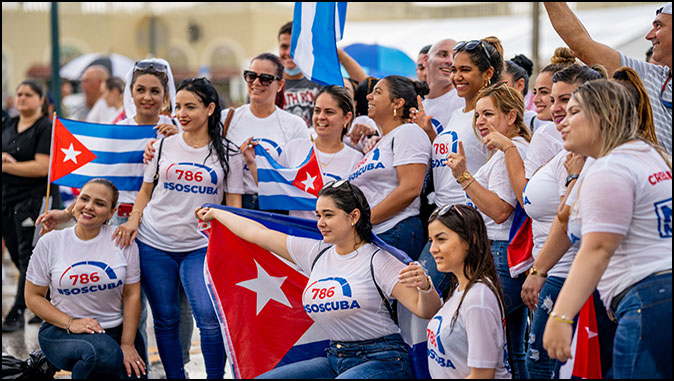 Democrat-Media Complex Highly Embarrassed by Anti-Socialist Uprising
Cuba reportage from the Left has curiously dried up in the last two weeks.
By Humberto Fontova

“The liberal’s arm cannot strike with consistent firmness against communism — because the liberal dimly feels that in doing so he would be somehow wounding himself.” — James Burnham in his classic Suicide of the West, 1964.

“We can get bogged down discussing all the changes by the Kennedy Administration that doomed the Bay of Pigs freedom-fight, which was planned under the Eisenhower administration with V. Pres. Nixon as its main booster. But the bottom line is that underlying all those changes was the American liberal’s guilt-complex. In brief, Kennedy and his people didn’t have their hearts in a mission to forcibly overthrow the communist Castro regime.” — Author Humberto Fontova, during a question-answer session with House Committee on Foreign Relations, Capitol Hill, Aug.1, 2007.

And nobody ever accused the Castro regime of being unperceptive about who their friends are. To wit:

“We’d better hope Kennedy wins this election,” Fidel Castro confided to a subaltern in 1960. “If Nixon wins our revolution won’t last.” The Bay of Pigs boondoggle, where a Democratic President denied vital support to Cuban Freedom-fighters trying to topple Castro found Fidel nodding smugly. A year later the Missile Crisis “resolution” where JFK pledged the U.S. to protect Cuban Communism, had Castro slapping his knee and high-fiving his Soviet patrons in vindication and glee.

In 2011 former Democratic president Jimmy Carter visited Cuba. “We greeted each other as old friends,” gushed Carter regarding his meeting with Fidel Castro.

“In 2002, we received him warmly,” reciprocated Castro. “Now, I reiterated to him our respect and esteem.”

“Jimmy Carter was the best of all U.S. Presidents,” gushed Raul Castro while seeing his American guest off personally and jovially.

In fact for many prominent Democrats Castro’s Cuba resembles the very Land of Oz, with Cubans laughing the days away—“ha-ha-ha! ho-ho-ho! and a couple of tra-la-las!” If this sounds hyperbolic here’s Conscience of the Democratic Party George McGovern after a visit to Cuba in 1975: “Everywhere we were surrounded by laughing children who obviously loved Fidel.”

Here’s the late Frank Mankiewics, a lifelong Democratic factotum who served as campaign chairman for Presidential candidate George McGovern, press secretary for Senator Robert Kennedy, and as head of NPR from 1977-1983. Mankiewics was greatly impressed by “The enthusiasm and unity of the Cuban people…they are proud of their accomplishments and sing songs about themselves and their country that reflect this self-pride.”

Fidel ringingly endorsed Barack Obama the first time around, while greatly fearing for the Democratic candidate’s life. “A profound racism exists in the U.S.,” Fidel revealed in an essay dated October 2008. “It’s a miracle that the Democratic candidate [Obama] has not suffered the fate of other Americans who dreamed of equality and justice like Malcolm X and Martin Luther King.”

“If I were a U.S. citizen I’d vote for Obama for president,” gushed Raul Castro’s daughter during an Obama Administration-sanctioned visit to San Francisco in May, 2012. “I think he is sincere, I think he speaks from the heart.” To cheers and applause from the San Franciscan crowd Raul Castro’s daughter also proclaimed that, “what we want is the power of emancipation through socialism.”

Fast forward to those fateful 2016 elections: “It’s Hillary’s hour!…The only hope of defeating Donald Trump is Hillary Clinton…the difference between the two candidates is vast. Barack Obama did not exaggerate when he claimed that she was better prepared to be a U.S. President than even he was—or was her husband Bill Clinton.” — Stalinist Cuba’s KGB-founded and mentored media organ Cubadebate, Oct. 15, 2016.

Now regarding recent coverage of the Cuba uprising by the Democrat’s press auxiliary [the Mainstream Media], Townhall reported just last week that the Castro-regime accredited U.S. “news” agencies [i.e. Mainstream Media] graciously bestowed Havana bureaus aren’t exactly “reporting” everything that’s been going on in Cuba this week. In fact, this very “accreditation” (thorough vetting by KGB-mentored specialists, and thinly-veiled threats regarding any “reporting” from Cuba that contradicts the KGB-founded regime’s propaganda goals) is a guarantee that they can’t.

And wouldn’t you know it? Kalev Leetaru over at Real Clear Politics just published an invaluable study showing that, though CNN and MSNBC (both bestowed Havana bureaus by the Stalinist regime) mentioned Cuba the most in their coverage over the past decade—that coverage suddenly dried up during the past two weeks! Duuuuuh???

In fact FoxNews (without a Havana bureau) reported over THREE TIMES as much on Cuba during the past ten days as did the media with actual “intrepid reporters” and entire press bureaus “embedded” in Cuba. Duuuuh?

Fascinating, no? But why should any of us be surprised? After all, “The Toast of Manhattan!” crowed Time magazine in January of 1996. “The Hottest Ticket in Manhattan!” also read a Newsweek story that week. Both articles referred to the social swirl and acclaim that engulfed Fidel Castro upon his visit to New York by the very Manhattan media and business luminaries who barely escaped incineration at his hand. The occasion was the UN’s fiftieth anniversary celebration, but the Castromania almost recaptured the hysteria for Simon and Garfunkel’s 1981 reunion in Central Park.

First on the Stalinist dictator’s itinerary was a luncheon at the Council on Foreign Relations. After holding court there for a rapt David Rockefeller, along with Robert McNamara, Dwayne Andreas, and Random House’s Harold Evans, Castro flashed over to Mort Zuckerman’s Fifth Avenue pad, where a throng of Beltway glitterati, including Mike Wallace, Peter Jennings, Tina Brown, Bernard Shaw, and Barbara Walters, all jostled for photo-ops and stood in line for the warmongering mass-murderer’s autograph.

Diane Sawyer was so overcome in the mass-murderer’s presence that she rushed up, broke into a toothy smile, wrapped her arms around Fidel Castro, and smooched him warmly on the cheek.

“You people are the cream of the crop!” beamed the mass-murderer to the rapt and smiling throng he’d coming within a hair of incinerating and now surrounded him.

“Hear, hear!” chirped the delighted guests while tinkling their wine glasses in appreciation and glee. But many more were left panting, because according to the U.S.-Cuba Trade and Economic Council, Fidel Castro had gotten over 250 dinner invitations from Manhattan celebrities and power-brokers.