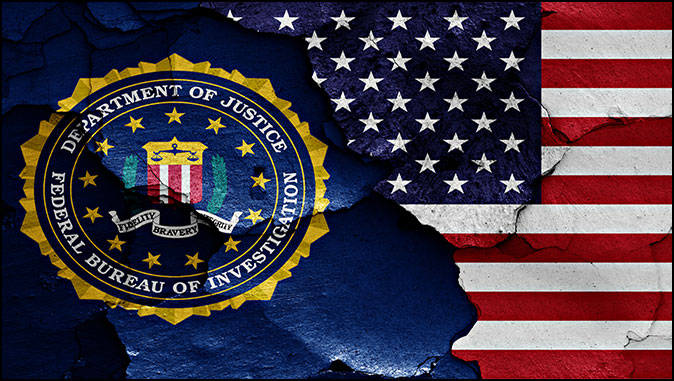 Defund the FBI
The Bureau has become irremediably politicized and inveterately corrupt.
By Robert Spencer

Was anyone really surprised when Senator Chuck Grassley (R-Iowa) announced that “highly credible” whistleblowers had given him information about FBI efforts to make the Hunter Biden scandal go away? Grassley wrote to FBI Director Christopher Wray and Attorney General Merrick Garland Monday that “the information provided to my office involves concerns about the FBI’s receipt and use of derogatory information relating to Hunter Biden, and the FBI’s false portrayal of acquired evidence as disinformation. The volume and consistency of these allegations substantiate their credibility and necessitate this letter.” Will anyone hail me as a prognosticator of extraordinary powers when I predict, correctly, that in response to this letter, Wray and Garland will do absolutely nothing, except possibly to cover their tracks more effectively? No, because anyone who has been paying attention can see that.

The FBI has become a cancer on the American body politic. The FBI must go.

Grassley continued: “In light of these allegations, I remain very concerned that political bias by a select group of Justice Department and FBI officials has infected the Justice Department’s and FBI’s usual process and procedure to open and pursue high-profile and politically charged investigations.” He then concluded: “If these allegations are true and accurate, the Justice Department and FBI are – and have been – institutionally corrupted to their very core to the point in which the United States Congress and the American people will have no confidence in the equal application of the law.”

That’s right. And Hunter Biden isn’t even close to being the first sign of this institutional corruption. Garland even sicced the FBI on parents protesting at school board meetings over the imposition of the woke agenda in public schools. When challenged, Garland insisted that this was all on the up-and-up: “Parents have been complaining about the education of their children and about school boards since there were such things as school boards and public education. This is totally protected by the First Amendment. True threats of violence are not protected by the First Amendment. Those are the things we are worried about here. Those are the only things we are worried about here. We are not investigating peaceful protests or parent involvement in school board meetings. There is no precedent for doing that and we would never do that. We are only concerned about violence and threats of violence against school administrators, teachers, staff.”

That sounds reasonable, but PJ Media’s Megan Fox did a deep dive into the supposed “threats” that school board members had allegedly received that justified FBI intervention, and came up empty. Fox concluded, “There isn’t one legitimate threat on the NSBA’s list or a situation that wasn’t handled easily by the police.” The NSBA is the National School Boards Association, which appealed to the FBI for help, with Wray’s corrupt Bureau only too happy to oblige.

This is the same FBI that consistently denies the nature and magnitude of the jihad threat, and lied outright about the jihadi who stormed the Congregation Beth Israel synagogue in Colleyville, Texas, and took hostages in January 2022, demanding the release of convicted jihad terrorist Aafia Siddiqui. FBI Special Agent in Charge Matt DeSarno said: “We do believe from our engagement with this subject that he was singularly focused on one issue, uh, and it was not specifically related to the Jewish community, uh, but we’re continuing to work to find motive and, and we will continue on that path.” Several days later, with the evidence overwhelming, the FBI had to admit sheepishly that it was a targeted attack on Jews after all.

FBI and Homeland Security Department officials have often insisted and frequently repeated the claim that “white supremacists” and other “domestic extremists” constitute the foremost terror threat the nation faces. The FBI is currently pursuing no fewer than 2,700 investigations of “domestic extremism,” more than twice the usual number of such investigations. The dramatic increase in investigations suggests, at least in a sane world, a response to a sharply increased threat, but Biden’s handlers have shown no evidence of a massive spike in “white supremacist” terrorism. It’s just something we’re supposed to take their word for. Timothy Langan, the assistant director of the FBI’s Counterterrorism Division, in November 2021 presented it to Congress as axiomatic: “It goes without saying that the threat from domestic terrorism is heightened and has significantly increased in the last 18 months.”

Does it really? Or is that just what the feds would have us believe as the January 6 Committee continues its efforts to stigmatize legitimate political opposition as terrorism? Even the far-Left Daily Beast reported as far back as April 2021 that “the FBI, without any court order, sifted through the National Security Agency’s massive troves of foreign communications for information on American ‘racially motivated violent extremists,’ a newly declassified order from the secret surveillance court details.”

And all this is aside from the FBI’s role in the Russian Collusion hoax and so much more. The FBI today is a rogue, out-of-control agency in service not of justice but of the interests of the Democrat Party. It should be shut down. But will there ever be a president with the courage to do so?