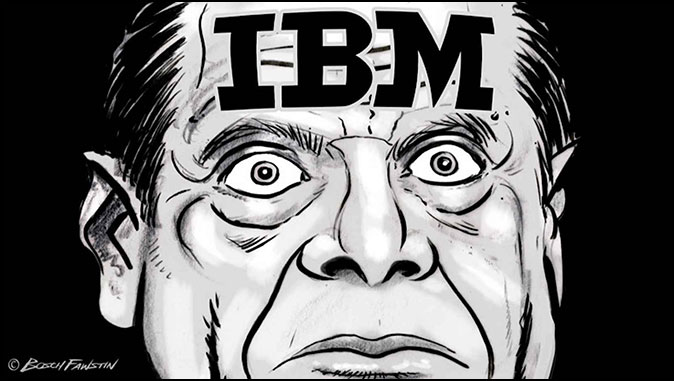 Cuomo’s Vaccine Passports and the IBM Connection
What’s behind the controversial governor’s connection to the tech giant?
By Daniel Greenfield

Are you a New Yorker who wants to live a normal life? Move to Florida.

And if you can’t do that, get an Excelsior Pass. ‘Excelsior’ means ‘higher’ in Latin and is New York’s motto. It’s probably not the best motto for a broken state tiptoeing toward bankruptcy. And it’s an even worse name for a vaccine passport that allows businesses to discriminate.

A day after April Fools’ Day, the Excelsior Pass launched in New York to enable businesses to determine whom they can refuse service to by employing IBM’s Digital Health Pass.

IBM describes its vaccine passport as “voluntary” and will allow New Yorkers “the ability to voluntarily share their health status on their own terms”, but there’s nothing voluntary about forcing people to use a passport carrying private health information in order to live their lives.

There’s nothing less voluntary than that.

Digital passports are big business and a few weeks ago IBM closed on a multimillion dollar contract for a German vaccine passport and is in the second phase of a contract with UK’s NIH socialized medicine setup with potentially millions at stake. There’s no official contract in New York which is just “testing” IBM’s vaccine passport technology, but the existence of the trial alone would help the tech giant secure international and national vaccine passport contracts.

News stories have claimed that New York has “fully subsidized” the vaccine passport, but have no details of the financing. The lack of basic information about this arrangement is unsettling.

IBM’s Excelsior Pass has been aggressively pushed by New York’s Governor’s Cuomo. Major sports arenas were being allowed to reopen, even while Cuomo was falsely blaming Jewish weddings for the spread of the virus, and some of those arenas are “testing” the passport.

Cuomo has repeatedly described the vaccine passport as crucial for reopening New York.

“The innovative Excelsior Pass is another tool in our new toolbox to fight the virus while allowing more sectors of the economy to reopen safely,” the scandal-ridden governor insisted.

But before Governor Andrew Cuomo was known for sexually harassing his subordinates, the mass murder of the elderly in nursing homes, or for somehow scoring a book deal that rewarded him with $86 for every copy sold, he was known for shady deals and economic arrangements.

Long before the pandemic, there were bets being taken in Albany over which scandal would be the likeliest to take Cuomo down and send him off to make hand sanitizer for the state in prison.

IBM had a key role in one of the arrangements that at one time seemed likely to bring him down.

In 2018, Cuomo aide Alain Kaloyeros, a Lebanese immigrant dubbed by the New York Times as the “Architect of Cuomo’s Buffalo Billion Project”, was sentenced to three and a half years in prison for rigging $850 million worth of contracts to Cuomo’s donors and political allies.

Kaloyeros had regularly appeared at Cuomo press conferences and the governor had referred to him as his economic guru. The judge who threw the book at him had described him as “the Apple in Cuomo’s eyes”.

Percoco, a top Cuomo aide and close friend, whom the governor had compared to a brother, was sentenced to six years in prison for taking $300,000 in bribes.

All of this sleaze and slime was well known and settled by the time the pandemic arrived and the media decided to spin Cuomo’s disastrous mishandling of the virus as brilliant political leadership, while suggesting that he might have a future as a presidential candidate.

The media not only knew who Cuomo was, they had previously reported on all of this.

The Buffalo Billion Project didn’t make national headlines, but a key part of it had involved Cuomo claiming that IBM would bring 500 IT jobs to Buffalo, an economically depressed upstate city, backed by $55 million in state spending. All it would take is some construction work.

The 500 IT jobs that were supposed to pay over $70,000 a year were as imaginary as Cuomo’s leadership. Instead IBM outsourced some dead end minimum-wage call center jobs to subcontractors. Worse still, IBM got a $57 million New York contract to outsource state IT work.

That same year, IBM was reported to have laid off or outsourced 4,000 jobs despite $1 billion in subsidies.

The original announcement came with some ass-kissing from Kaloyeros, boasting that “Governor Cuomo’s blueprint for job creation and economic growth through targeted, high-tech investment has delivered another victory for all of New York… We look forward to yet another successful partnership with International Business Machines.”

Ginni Rometty, then the CEO of IBM, had declared that, “IBM is excited to partner with the State of New York and the SUNY College of Nanoscale Science and Engineering.”

The CEO of the SUNY College of Nanoscale Science and Engineering was Kaloyeros.

This sort of story has kept repeating itself in New York. In 2019, there was yet another announcement of a $300 million state subsidy for a supposed $2 billion expansion.

And it’s not just Cuomo.

At the end of March, Senator Schumer announced a “historic collaboration” involving IBM that “positions Upstate New York for even more semiconductor manufacturing jobs”, backed by federal funding. That’s after a year in which IBM laid off workers in New York once again.

Over a decade ago, IBM employed 130,000 Americans. These days, it employs less than 100,000 Americans, but has 130,000 employees in India. In a 2016 op-ed, Rometty claimed that, “we have thousands of open positions at any given moment, and we intend to hire about 25,000 professionals in the next four years in the United States.”

These claims are impossible to measure because IBM has refused to disclose its American job numbers since 2010, and refuses to often even identify the size of its layoffs, but there’s no apparent evidence of such growth by IBM in the United States. IBM’s latest layoffs last year have been reported by the Wall Street Journal using its sources as being in the thousands.

One estimate suggests IBM killed 20,000 American jobs in the last decade for employees over the age of 40, and moved those jobs over to India while violating age discrimination laws.

New York politicians have been mostly uninterested in these claims while writing more checks and promising another boom in IBM jobs that never actually materializes, but does end up helping out Cuomo’s donors.

IBM claims that its vaccine passport can be trusted, and that personal data is safe with its setup, yet the tech giant provides curiously little information about its arrangement with New York.

The Excelsior Pass is the first major vaccine passport field test in America. It is a system that will inescapably discriminate by personal health, disability, race, and other criteria. It’s an arrangement between a scandal-ridden governor and a company that has played a role in at least one of his major scandals for which no information, except press releases, is available.

Both Cuomo and IBM have inculcated a paranoid culture of secrecy about the most basic details of their operations, while barraging the media with endless press releases.

The Excelsior Pass will shape the future of vaccine passports in America. That’s why it’s important to know everything about it. And yet the same media that refused to ask any of the tough questions about Cuomo’s mishandling of the pandemic, is now eager to report on his sexual harassment scandals, but still won’t ask any real questions about his vaccine passport.