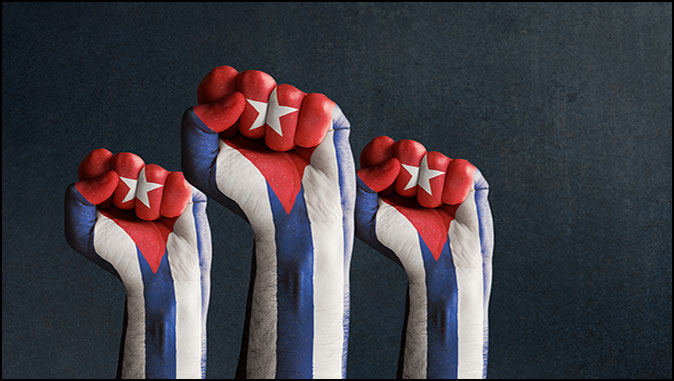 Cuba: It’s About the Socialism, Stupid
If Biden succeeds, where will our refugees go?
By Don Feder

Cuba could be a preview of coming attractions for America, if the Biden gang has its way. The tragedy of life in the tropical gulag can be summed up this way: It’s about the socialism, stupid.

The protests which have rocked the island in the past ten days are the result of 62 years of pent-up frustration turned to anguish and rage. What started in San Antonio de los Banos has spread to more than 40 cities.

Demonstrators wave American flags and signs in Spanish reading “Liberty,” ”Freedom” and “Down with Communism.” The regime of gray apparatchik Diaz-Canel has responded with its rapid reaction brigades beating demonstrators, mass arrests and summary trials and sentencing behind closed doors, without defense counsel. More than 500 have simply disappeared.

An 88-year-old was quoted in a news story saying the Cuban people are, “Done with being hungry, unemployed, without water, without power” without human rights.

The media has done its typically pathetic job of describing conditions in the proletarian paradise, which include standing in line all day to get a morsel of bread and hours-long blackouts.

The average Cuban is allotted two kilograms of meat every 10 days and 5 eggs a month, when he can get them. There aren’t many fat Cubans.

Demonstrators are irate about a video showing one of Fidel’s grandsons tooling around Havana in a Mercedes with his looks-like-a-model girlfriend. The typical Cuban could have a Mercedes too – if he saved his salary for the next 6,000 years.

President Biden assured the Cuban people that he felt their pain. “Communism is a failed system – a universally failed system. And I don’t see socialism as a very useful substitute.” That throwaway line is all the Cubans will get out Washington. Secretary of Homeland Insecurity Alejandro Mayorkas, (who hands out fruitcakes at our southern border) says that if Cuban refugees try to reach our shores by boat, back they go. Can’t have future citizens who might vote Republican.

To the left of the Geezer-in-chief, it was all about the embargo.

AOC calls it “absurdly cruel.” Black Lives Matter (one of whose founders described herself as a “trained Marxist”) said the Cuban people have taken to the streets to protest the “Cruel and inhumane” U.S. embargo. Funny, none of the protestors carried anti-embargo signs.

For Cuban communists, the embargo serves the same purpose as those perennial crop failures in the old USSR.

Of the embargo, it should be noted: 1. It doesn’t stop Cuba from trading with 195 other countries. 2. Regarding trade with the U.S., certain food and medicine are exempt. 3. Cuban-American visitors bring in non-exempt goods. 4. The embargo’s impact is offset by remittances from 2.3 million in the Cuban exile community (averaging between $900 million and $1.5 billion annually).

The regime’s only success in more than half-a-century has been in building a cruel and inhumane system. You can call it communism, if you like. But what is a communist but a socialist with a gun. And, in the end, socialists always need guns.

In 1959, when the El Supremo took over, Cuba was among the most advanced and fastest developing nations in Latin America. Socialism cured that.

Most industry and agriculture are collectivist. State farms lack the machinery and fuel to operate efficiently, not to mention the absence of a profit motive. In a land with rich soil and an ideal climate, collectives struggle to raise fruit – most of which is exported for hard currency.

In Cuba’s much vaunted medical system, physicians are paid the equivalent of $18 a week, and patients bring their own bedding to hospitals.

When I was on the island in 1998, the doorman at my hotel was a civil engineer. He said he could pursue his profession for $15-a-month (then the going wage) or make $15 a day in tips. That’s the genius of socialism. It turns engineers into doormen.

Why should Americans be denied the glories of such a system? Biden’s soft socialism would extend federal entitlements to an additional 21 million – the largest expansion of the welfare state since LBJ’s Great Society. More than half of working-age households would be on the dole, in one form or another. This includes 80% of single parents and 57% of couples with children.

New programs will include free community college tuition for families earning 1.5 times the median income, all day-care expenses above 7% of family income for children under 5, a cap on rents based on income, and let’s not forget Medicaid for All.

Socialism a la Joe, won’t directly involve public ownership of the means of production or state farms. But we’ll arrive at the same place, through massive subsidies for favored firms, the end of private energy production, minute regulation and bone-crushing taxes – all wrapped up in green-energy , social-justice and racial-equity rhetoric.

In the end, socialism isn’t about state ownership, but shortages, suffering and control.

Joe has to go slow. We still have elections that are semi-free. Unlike Castro, Biden didn’t come to power as the leader of a guerrilla band who could simply execute opponents. So it may take longer to boil the frog.

Those Cuban protestors who are waving the American flag are honoring the nation we used to be, not the one we are becoming. If Biden and his socialist handlers succeed, where will our refugees go?