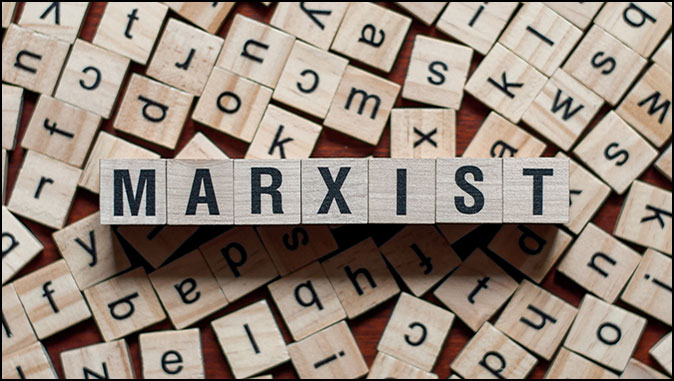 Critical Race Theory’s Marxist Roots
And its existential danger to our political freedom and unalienable rights.
By Bruce Thornton

The expanding influence of Critical Race Theory and its Black Live Matter “praxis,” as Marxists call applied theory, has raised concerns about its incoherent pronouncements and illiberal aims. The origins of this ideology is an important question, for CRT has nothing to do with civil rights, or improving black lives or making them “matter.” It’s about increasing its practitioners’ power in our institutions in order to “fundamentally transform” the United States from a country of ordered liberty and limited government, to a “soft” despotic, intrusively regulated technocracy at best, or an illiberal socialist tyranny at worst.

CRT has its roots in Marxism, as one of the founders of BLM has bragged. And, like the Soviet version of Marxism, BLM’s growing influence over our social, educational, political, and corporate institutions––already compromised by a century of progressive ideology, itself a kissing-cousin of Marxism––is an existential danger to the Constitutional safeguards of our political freedom and unalienable rights.

The first Marxist feature is the dubious habit of thought often called the “hermeneutics of suspicion.” This intellectual grift also defines postmodernism in general, and ideological movements like poststructuralism, radical feminism, and postcolonialism, all of which are fellow travelers of Marxism.

This method of analysis assumes that the reality of all social, political, artistic, and other cultural phenomena cannot be known from the public words and actions of social and political institutions, but rather must be found in the deeper, subterranean ideologies of the power elite that runs them. This “ruling class” shapes political and institutional “discourses” and “knowledge regimes”––the “epiphenomena,” as Marxists call them–– in order to benefit their tyrannical, selfish interests by oppressing others, whom they keep imprisoned in a “false consciousness” that hides from them the true agents and causes of their oppression.

Hence for CRT, all the progress in race relations––the Civil Rights Act, the Voting Rights Act, Brown vs. Board of Education, the growth of the black middle class, the elimination of legal segregation, and the increase in black office-holders including the presidency––are mere “epiphenomena” that have not eliminated the underlying “systemic racism.” According to CRT, this occult “racism” keeps racism alive and accounts for all the “disparate impacts” that deny “equity” (i.e. the equality of result) to blacks and other minorities, but benefit and reward “white privilege” and “white supremacy” at the expense of black well-being.

Correcting that “false consciousness,” especially “white fragility,” the denial of white “privilege” and “racism,” explains the efforts to include CRT in school curricula from pre-school to university, and in training programs for employees of corporations and the federal and state government agencies so that they interpret their functions from the CRT perspective. The goal is to expose and reform these institutions’ true oppressive nature that is obscured by their duplicitous, self-serving public claims and motives. Hence the “1619 Project,” which has revolutionized and deformed the discipline of American history from grade school to university.

This retooled Marxism is clearly preposterous, an abstract, jargon-ridden verbal concoction for which there is no empirical or historical evidence or truth. But “truth,” “objectivity,” “reason” and “evidence” for a Marxist are meaningful and true only in terms sanctioned by Marxist ideology, and the sophisticated “woke” whose “consciousness” has been “raised” above the doltish, bourgeois hoi polloi who think, like the chained captives in Plato’s cave, that the shadows dancing on the walls of their politico-social prison are reality.

“Racism” today, then, is not about what it originally meant to the progressive “scientific” racists in the early 20th century––that every member of a lower race is by nature inferior to every member of the superior one. Now “racism” is a function of “white power” and “white privilege,” and its purpose is to shape our culture and political discourse––words like “equality” and “freedom” and “tolerance”–– so that they both camouflage and perpetuate that power. So no oppressed person, meaning any “person of color” defined by superficial physical characteristics, can be “racist.” Only “whites,” who because of those historically oppressive institutions enjoy “white privilege” no matter their social class, are “racists.”

The next offshoot of Marxism informing CRT is Critical Theory, a creation of the Frankfurt School and Cultural Marxism that transferred the Marxist struggle from the proletarians on the factory floor, to the broader cultural institutions whose false narratives of truth, beauty, and freedom had to be destroyed. Hence the “critical” in CRT. It does not mean a method of reasoning and analysis that brings us closer to the truth, but rather an undermining of America political, social, cultural, and economic norms, structures, and “discourses” in order to expose the supposedly ugly truth of economic and legal oppression fomented by conservatives, traditionalists, and patriots. Or as Marx himself put it, “a weapon” to use against an “enemy, which it wants not to refute but to exterminate.”

Thus the “long march through the institutions” by devotees of Cultural Marxism, most notably in the universities, for higher education teaches not just the next generation of academics, lawyers, and other professionals who form the country’s cognitive elite; but also those who end up in state colleges where they instruct and certify the future teachers in K-12 schools, thus capturing minds when they are young and impressionable. Again, that’s why revising traditional curricula, even more so than controlling opinion magazines, websites, pop culture, or books, is the most important BLM tool for dismantling the bourgeois, capitalist, Judeo-Christian culture that defines Marxism’s most powerful and hated enemy: the American political order comprising liberal democracy, a free-market economy, and individual rights that transcend political power.

Cultural Marxism, then, attacks “false consciousness” as expressed in our political institutions and discourse, especially the Constitution and its unalienable rights like the freedom of speech. The First Amendment is founded on the idea that a “free marketplace of ideas” expressed by many diverse minds, will respect the citizens’ diversity of viewpoints and opinions, as well as provide a greater public stock of ideas for citizens and lawmakers. But an illiberal, totalitarian mentality despises all true diversity, especially that of speech. Possessing the revealed Leftist truth hidden from the “unwoke,” outfits like BLM have declared open war on the First Amendment.

In doing so they are again refurbishing a Marxist idea. Consider Cultural Marxist Herbert Marcuse’s 1965 essay “Repressive Tolerance,” which argued that the protection of free speech thwarts the cause of “social justice.” Hence his conclusion “that the realization of the objective of tolerance would call for intolerance toward prevailing policies, attitudes, opinions, and the extension of tolerance to policies, attitudes, and opinions which are outlawed or suppressed.”

This means an Orwellian redefining of “tolerance” itself, the sine qua non for free speech, in order to liberate its “true” meaning, which of course comes from Marxism: “In other words, today tolerance appears again as what it was in its origins, at the beginning of the modern period––a partisan goal, a subversive liberating notion and practice. Conversely, what is proclaimed and practiced as tolerance today, is in many of its most effective manifestations serving the cause of oppression.” Any speech that does not advance the Leftist revolution is false and wicked, and should not be tolerated or protected.

From this idea comes the rationalization for the attacks on First Amendment rights that have been going on in universities for decades, but now permeate institutions such as journalism, corporations, publishing, K-12 schools, and even the military. Indeed, some of the top brass in the Pentagon are practicing the “cancel culture” that assaults our unalienable right to speak our minds in the town square, one of those freedoms the military exists to defend.

Critical Race Theory, then, is not some new “higher nonsense” of the sort our universities cook up. It’s the spawn of Marxism and its offshoot Cultural Marxism. It has used ideas like “hermeneutics of suspicion,” “false consciousness,” and “repressive tolerance” to foment racialist division and conflict that they can leverage for more political, social, and cultural power. This has been the modus operandi of Marxism from its beginning, especially in Marxism’s “late phase” when the revolution will not be waged by the industrial proletariat, but by the privileged, affluent tech-oligarchs, corporate boards, media pundits, university faculty and administrators, politicians, think-tank habitues, and federal agencies, all of whom have lost their nerve in the face of a historically, intellectually, and morally incoherent and destructive movement that has littered history with mountains of corpses.

And the old enemy of freedom will win, unless, as Winston Churchill said to Parliament after the Munich debacle, “By a supreme recovery of moral health and martial vigour, we rise again and take our stand for freedom as in the olden time.”