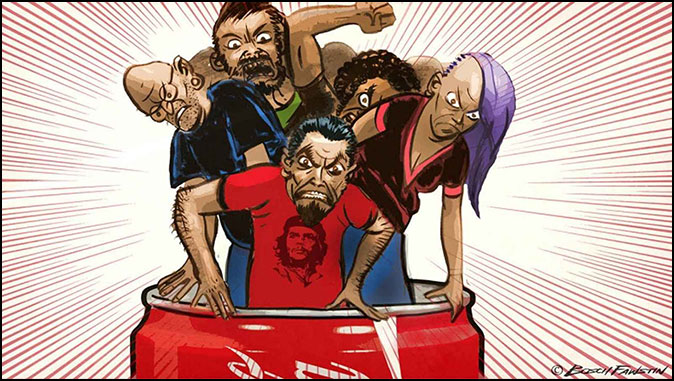 “Get woke, go broke”, is a conservative meme about the cost of political correctness that has it the wrong way around. Brands don’t go broke because they get woke, they go woke because they’re going broke, and don’t know how to stop the slow but steady collapse of their business.

The big brands that go woke infuriate conservatives because, like Coke, Gillette, or Nike, they have a storied name that seems entwined with America and the success of capitalism. But it’s those old, familiar brands that go woke because their products and business models are dated. Virtue signaling is their way of adapting to a changing market without really innovating. Behind every big woke brand is a company slowly going broke and with no clue what to do about it.

The wokeness vocabulary joins the thesaurus of corporate buzzwords used by executives trying to hide from their investors that they don’t know what they’re doing. Making headlines for their wokeness changes the conversation from their business model to their politics. Touting a brand as socially responsible evades questions about its financial viability.

Coca-Cola’s global sales fell 28% in the second quarter of 2020 from $10 billion to $7.15 billion. The corporate giant blamed the pandemic which had shuttered movie theaters and bars, and began cutting its small brands while concentrating on its big signature brands.

But Coke was struggling even long before the pandemic.

Despite all the international marketing, North America is still the biggest soda market. And the average American is down to drinking 40 gallons of soda from 50 gallons two decades ago. The shift was driven by the same demographic that tends to go woke, young white urban lefties, who became more likely to drink bottled water. Coke chased them by going into bottled water and vitamin drinks, but also by shifting away from a family brand once associated with Santa.

Santa and the polar bears reflected a Coke that was marketed to children. But fewer parents are comfortable with their children living off soda. That’s why one survey found that the number of children drinking over 3 cans of soda a day fell from 10% to 3.3%. The drop in soda consumption, once again, was heaviest among younger and wealthier urban white lefties.

The economic consequences of young white wealthy lefties dropping soda wasn’t just a sales issue. Wokes are a politically narcissistic demographic that legislates its tastes into law, pursuing the legalization of drugs, and bans on soda. Both drug legalization and soda bans were, as usual, done in the name of oppressed minorities, but had little impact on them.

Legal drugs are too expensive for minorities and the infamous soda taxes don’t work. But the soda industry remembers what happened to tobacco and other lifestyle habits that fell afoul of the cultural values of the new woke ruling class. That’s another reason why it went ‘woke’.

Banning soda from schools and taxing it in stores precedes the class action lawsuits and national legislative activities that would effectively eliminate sodas from the marketplace.

And it should be. Bloomberg isn’t just fighting coal and guns, he’s also spending a fortune pushing his soda ban in cities and states around the country. The soda industry has ramped up spending to defend itself against everything from soda taxes to its links to slave labor. But it understands that the real threat is cultural as the new woke ruling class destroys the habits of the old America that it associates with conservative, working class, and flyover country.

That’s why cigarettes are a deadly menace, but pot is a civil rights crusade. The health issues are a pretext for a cultural revolution. And Coke went woke to convince the wealthy young urban lefties to incorporate its signature products into their lives by joining the cultural revolution.

The Left bet that if it could radicalize the children of the wealthy that Corporate America would bend the knee. And that’s exactly what happened. The radicals used their leverage over academia and the entertainment industry to create radical generations. But that radicalism was heavily concentrated among the Ivy League and the children of the elites who would become the corporate leaders and also be the consumers with the most disposable income.

Economics, like politics, proved to be downstream of the culture. Capturing the ecosystem at its base allowed the Left to take over the economy and turn some of the country’s biggest brands into megaphones for its propaganda. But these are corporate brands that have all the qualities of the ossified elites that have always been an easy target for the revolutions of the radicals.

Coke, like the average big woke brand, has a majority share of a declining market. It has limited growth potential within that market. Coca Cola’s fortunes are closely tied to movie theaters, which were in a catastrophic state of decline even before the pandemic, and to McDonald’s.

McDonald’s, like a lot of traditional fast food places, is experiencing its own slow decline. The clown joint, like Coke, tried to reinvent its brand as being about healthy food and leftist politics. Just like Coke, going ‘woke’ hasn’t stopped its decline, or the threat of the cultural Left regulating it out of business to protect minorities from the pernicious threat of its Happy Meals.

When McDonald’s brought in its new British CEO Steve Easterbrook, he promised to make it over as a “modern progressive burger company”. The company hired Robert Gibbs, Obama’s press secretary, to head communications. McDonald’s flipped its arches upside down to celebrate International Women’s Day. And then Easterbrook was forced out for allegedly having affairs with three female employees. Meanwhile the decline in foot traffic is still going on.

The Coca Cola Company meanwhile has a British CEO who pledged allegiance at Davos to a “new social contract” and an “economy that works for everyone”. He took over from the company’s previous Turkish CEO, and the Turkish CEO’s South African predecessor. The head of Coca Cola in North America is a Honduran who came out of its Latin American division.

The other thing about these iconic American brands is that they don’t have American leaders.

Coke won’t shut up about social justice and the evils of whiteness because that’s a better conversation than its failed portfolio of new brands, dumping its bottling operations, and its desperate efforts to refocus by launching a thousand different varieties of Coke aimed at the one lefty demographic that holds its future in the palms of its soft white manicured hands.

Otherwise its whole massive distribution network will be used for little more than moving orange juice, vitamin drinks, and milk around as soda and fast food go the way of cigarettes.

Coke is going woke because its future is broke. That’s true of most of the big woke brands. And the closer Coke gets to the cliff, the more hysterical its performative wokeness will become.

‘Wokening’ is a social disease of stale companies with stale brands whose products are overpriced and have fallen out of touch with the needs of many consumers. And the country’s consumer marketplace is dominated by these collapsing giants whose leaders are just marking time and cashing big checks while trying to co-opt the revolution threatening to destroy them.

European monarchs tried to co-opt leftist revolutions because they no longer had confidence in their own roles and had no idea what to do next. Coca Cola and the woke corporate giants share the same decadent sense of decline and their urban elites are selling out their rural base to appeal to the young radical generation to which their children and their social circle belong.

Wokeness is the consequence of a moral and economic brokenness among the nation’s elites. The Left conquered the corrupt infrastructure of a decaying political and economic system. Now it’s using that infrastructure to brainwash and suppress the country’s middle and working classes by lecturing them on their racism, and redefining them as domestic terrorists.