In 1958, noted liberal Betty Friedan wrote in Harper’s magazine that scientists were certain “the glacial thermostat, the present interglacial stage is well advanced; the earth is now heading into another Ice Age.”

Since the late 1800s, establishment liberals proclaimed that our planet was doomed to freeze in as few as ten years. Referred to as “Global Cooling,” the libs trotted out one scientist after another showing scientific research as proof of the coming “freeze.” (1)

Yet since the early 1900s, scientists have disagreed as to whether the earth is heating up or cooling off. 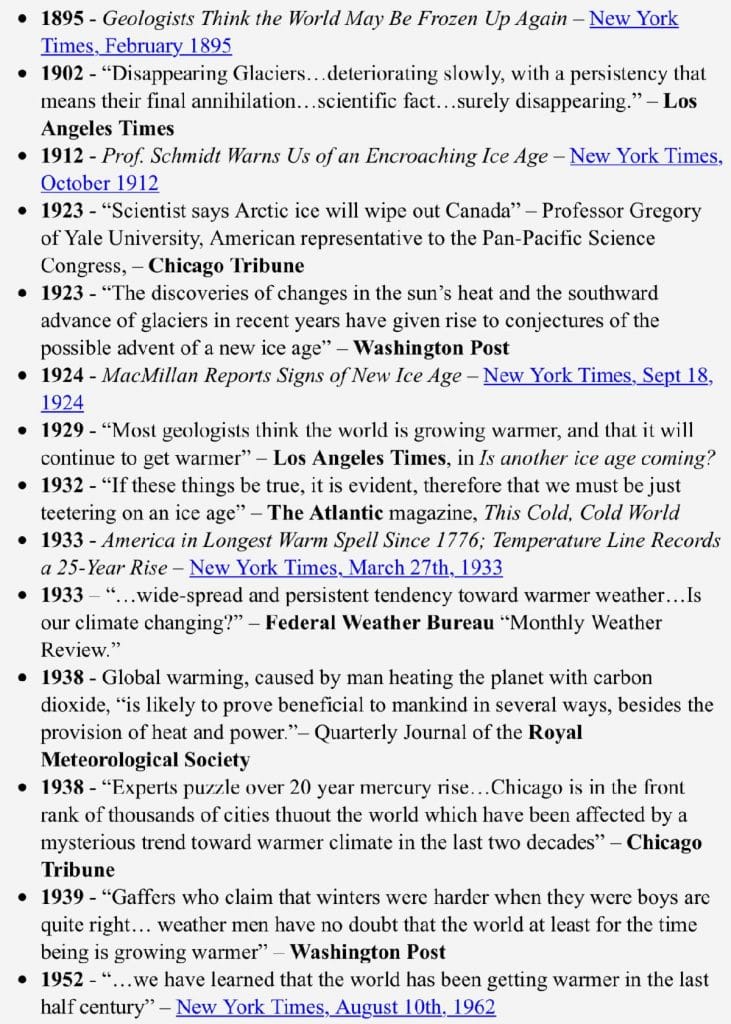 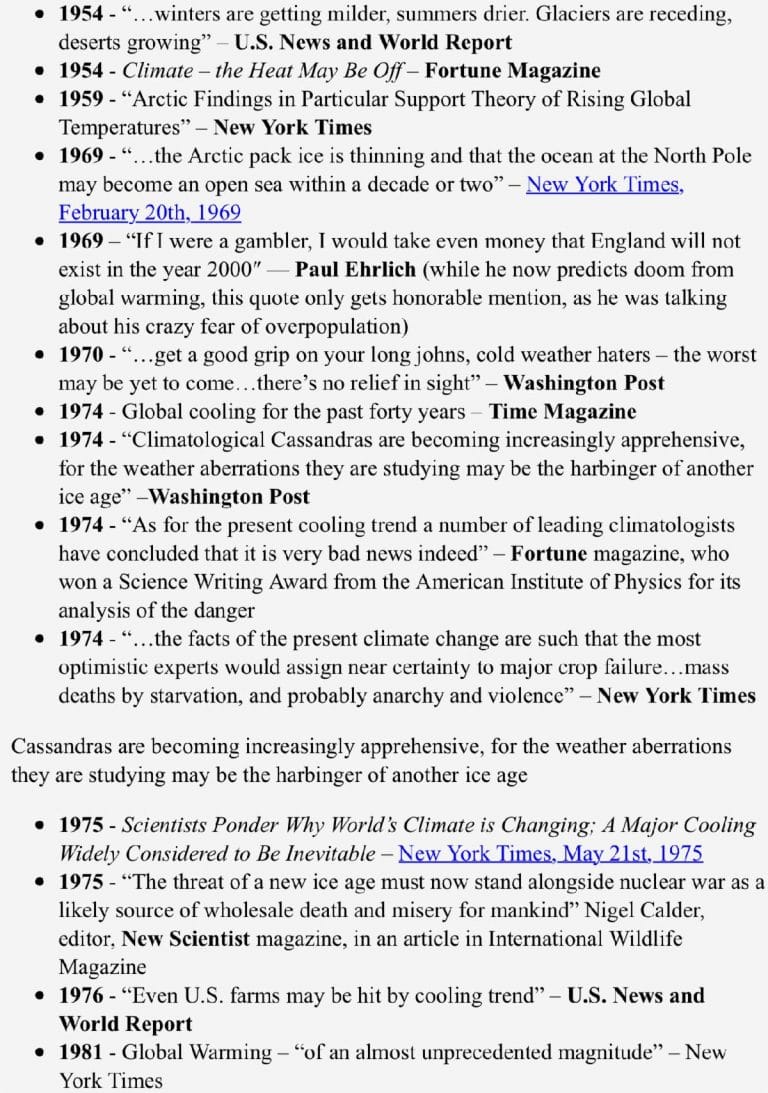 But by the 1980s, when the idiocy of the “fact” we’re going to freeze showed obvious holes, they switched to “Global Warming,” and have since paraded out more scientists with research showing the “irrefutable facts” of the coming world heat disaster. 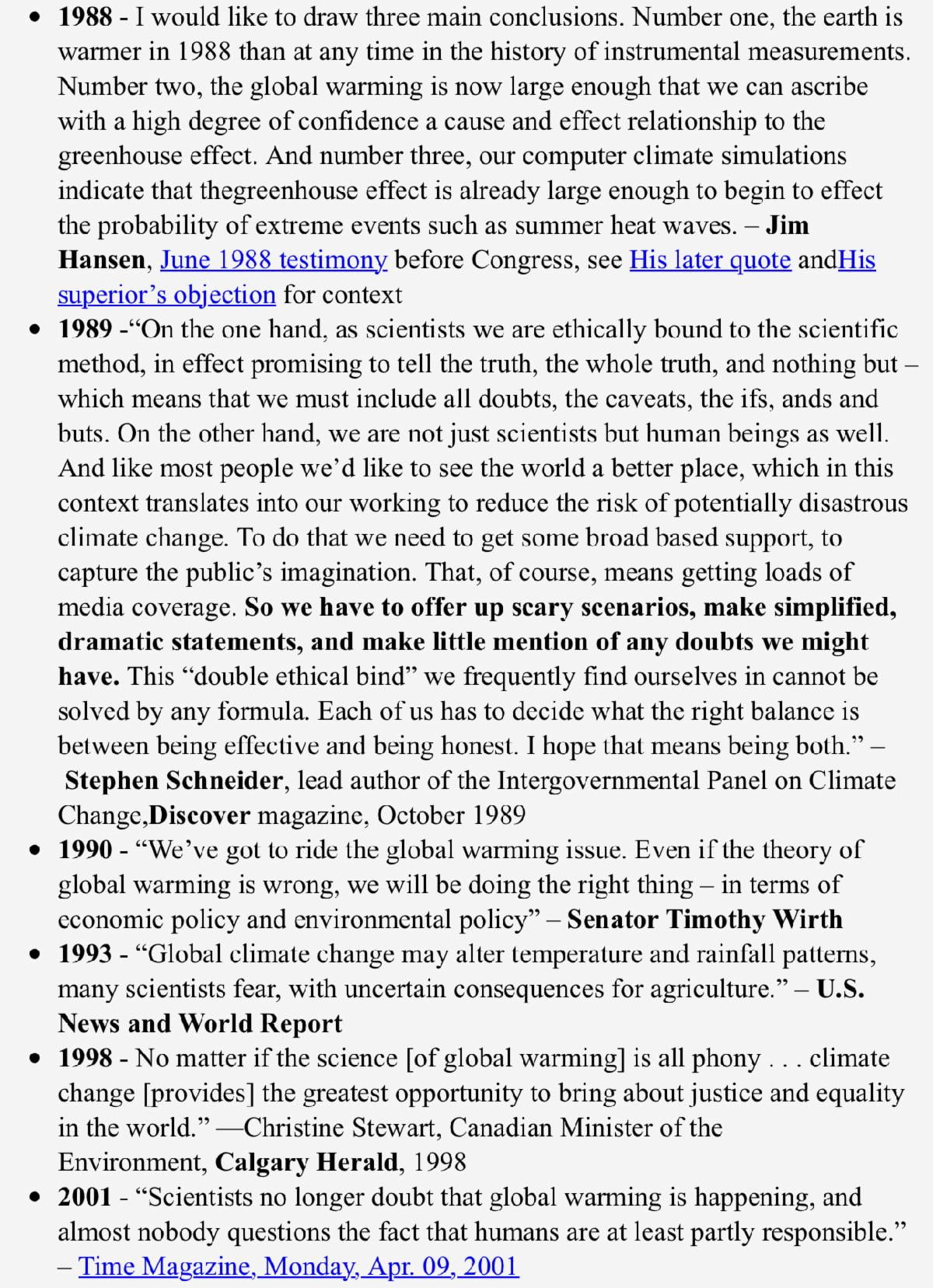 But ultimately Global Warming began to also reveal its non-scientific stupidity, so they switched to “Climate Change.” 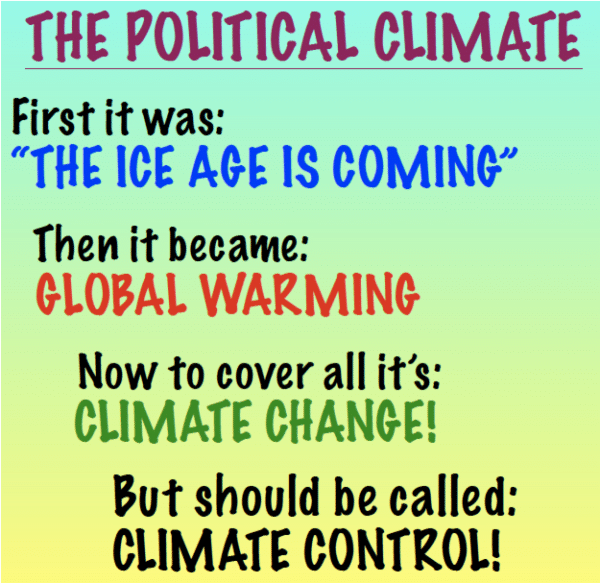 Now they’re blaming all the world’s problems on man’s impact on the planet. They say there are “over 1000 research studies” that prove Climate Change is real… which is a bald-faced lie.

The national news promotes the lie, calling it the “FACT” of Climate Change, and come down hard on anyone who disagrees. 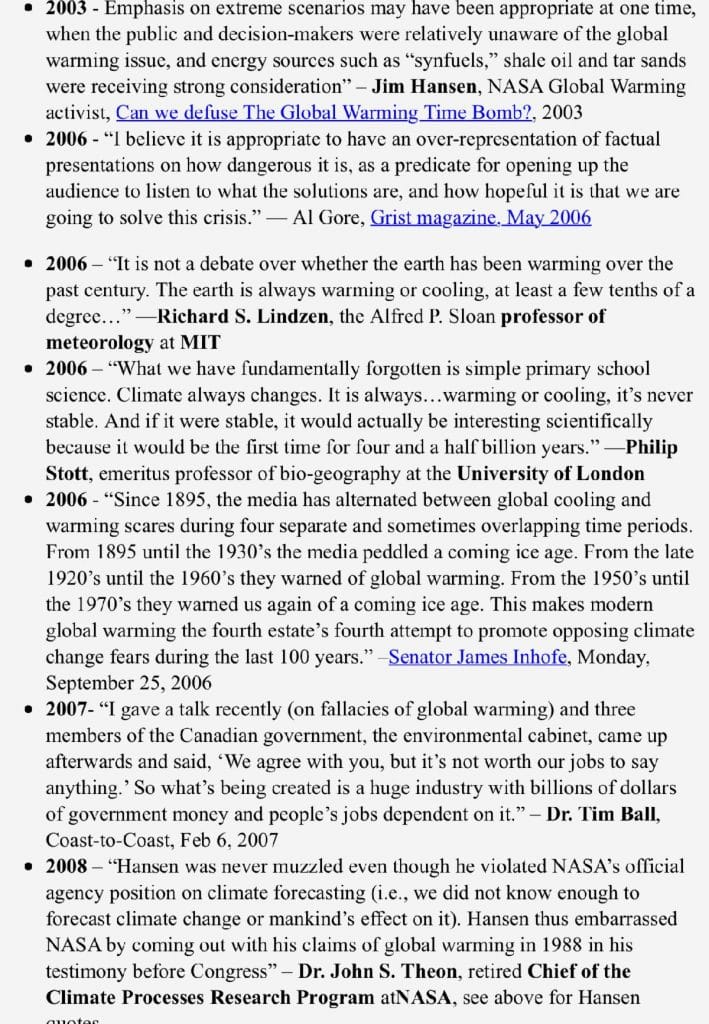 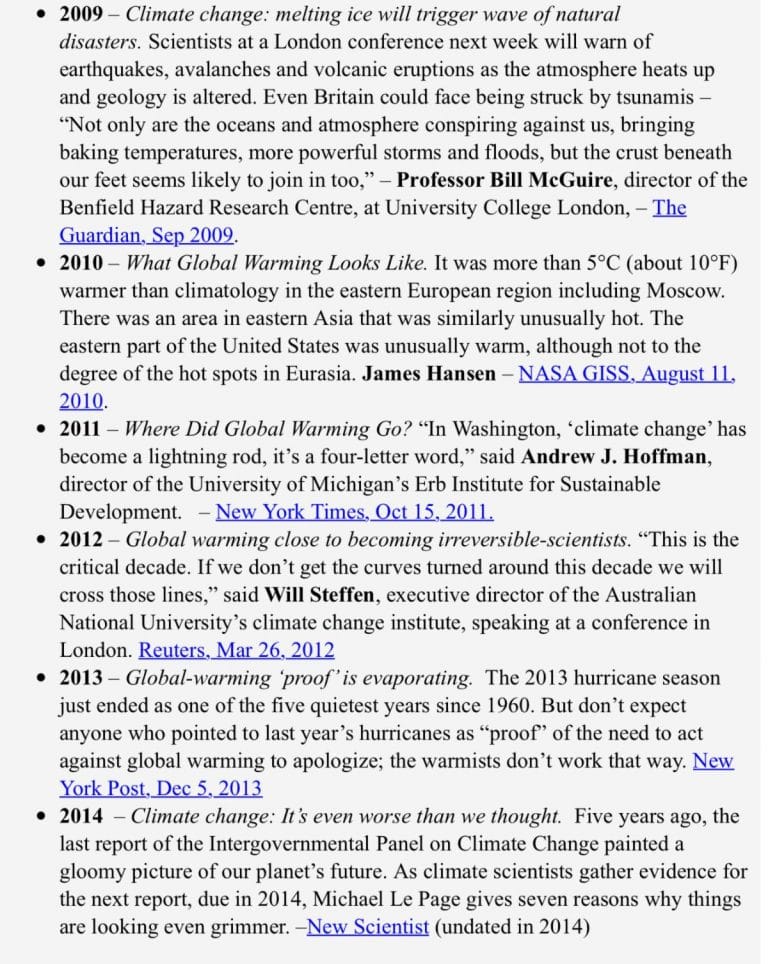 The only “FACT” is that these “studies” are myths, lies and distortions produced by the same kind of people who conspired to say Donald Trump “colluded” with Russia.

Yet students today are universally taught that it is a scientific fact that man (usually meaning white males) has so damaged this planet from using fossil fuels that the earth will only last a few more years… doom is coming soon if we don’t do what they say.

To anyone with two brain cells, the obvious purpose of all these climate proclamations and predictions through the years is to use the climate for political value. After all, who can argue against saving our planet? All we have to do is give them the power to control more and more of our lives.

Liberal politicians are now turning up the heat saying we must change how we live, even saying if we don’t change our ways we’ll have to go back to the dark ages to stay alive on this planet.

Some politicians say this disaster will come in as few as 10 or 15 years. Of course that’s what they’ve been saying since the early 1900s: 10 to 15 years. It’s a phrase well-tested in those focus groups. Makes you want to worry!

And this time they actually are right!

Yes, you read that correctly. The liberals are dead-on about climate change coming in the next 10 to 15 years. But it’s not going to happen like they think.

One of the most graphic characteristics of the soon-coming Tribulation that follows the Rapture, is the horrific scorching heat that comes on the earth. The temperature so high that people are grateful to die to escape the heat.

“These are the ones who come out of the great tribulation…they will hunger no longer, nor thirst anymore; nor will the sun beat down on them, nor any heat;” Rev. 7:15, 16

This “climate change” will in fact sink Miami, as famously predicted by Bill Clinton when he said:

“’The water is going to keep rising’ whether US stays in the Paris Accord Talks or not.” (The Paris Accord was the world meeting to deal with Climate Change that President Trump wisely pulled out of)

And yes, the polar ice caps WILL melt, but probably in about an hour, not decades. And that will be the least of their problems. This is the time that God will shake the earth so violently that ALL the mountains will fall and ALL the islands will sink.

“and there was a great earthquake, such as there had not been since man came to be upon the earth, so great an earthquake was it, and so mighty. … And every island fled away, and the mountains were not found. Rev. 16:18,20

In Isaiah 24:13,19 the Bible compares someone violently shaking an olive tree to get the olives to fall off to what God does to the earth during the Tribulation. Ouch!

All this causes the nations of the earth to be in disarray, totally baffled by all that is going on.

“There will be signs in sun and moon and stars, and on the earth dismay among nations, in perplexity at the roaring of the sea and the waves,” Luke 21:25

The bleeding heart liberals left behind after the Rapture will have more than “climate” change” to deal with…rather, they will be the recipients of God’s wrath. God says the time will come when He will not be silent any more!

“I have kept silent for a long time,
I have kept still and restrained Myself.
Now like a woman in labor I will groan,
I will both gasp and pant.
I will lay waste the mountains and hills
And wither all their vegetation;
I will make the rivers into coastlands
And dry up the ponds”. Is. 42:14-15

Of course God clearly warned of this time in His Word. It’s there for anyone to read. He even offers a way to escape the coming horrors. But most people chose to ignore scripture and instead chose to worship Satan—who is actually behind all this hokey “climate change.”

And those who ignore the Word of God will pay a stiff price.

“For the wrath of God is revealed from heaven against all ungodliness and unrighteousness of men who suppress the truth in unrighteousness,” Rom. 1:18

“For it is because of these things that the wrath of God will come upon the sons of disobedience,” Col. 3:6

Let me rephrase that in case you missed it. The WRATH of God IScoming against all unsaved sinners, all non-Believers. It’s coming suddenly, in a moment they least expect it. The lies, murders, blasphemy is all seen and recorded for future judgment.

It will be a sad time on earth. Most will die. Few will survive into the Millennium.

Praise the Lord that God has not appointed us to receive the coming “wrath!”

“For God has not destined us for wrath, but for obtaining salvation through our Lord Jesus Christ,” 1Th. 5:9

“Much more then, having now been justified by His blood, we shall be saved from the wrath of God through Him.” Rom. 5:9

All Born Again Believers will be removed from this earth before His judgment begins.

So the next time some liberal starts in on “Climate Change,” just say “I agree with you, ‘Climate Change’ is coming.” And that will give you one remarkable witnessing opportunity!

But keep in mind that this whole climate issue is not about the “climate.” Rather, it’s about “Control.” In the not-too-distant future, this earth will be controlled by one person from one place. We’re just seeing the beginnings of this taking shape.

South-Central Illinois Town Removes Cross From Mural After Outside Pressure

Why is the Media Exempt from Coronavirus Business Shutdowns?

Why is the Media Exempt from Coronavirus Business Shutdowns? Sticking microphones in front of senior…