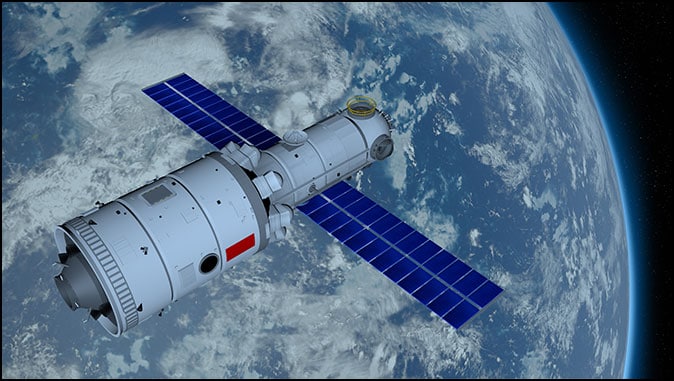 China’s Plan to Dominate ‘Near-Earth’ Space
By Lawrence A. Franklin

Communist China’s space program is demonstrating that it is on a trajectory possibly to surpass the US in the military and scientific exploration in our solar system. China is planning a space spectacular to celebrate the 100th anniversary of the founding of the Chinese Communist Party on July 23, 1921. Today, June 17, China launched a three-astronaut crew who will inhabit the command module of its soon-to-be-completed Tianhe Chinese Space Station. This planned human launch follows the June 10 multiple satellite deployment from Northern China’s Taiyuan Satellite Launch Center. One of these satellites is designed to track near-earth asteroids.

As early as the mid-1950s, Chinese Communist Party (CCP) Chairman Mao Zedong declared, “We too will make satellites.” Following that declaration, China aggressively began to compete with both the former Soviet Union and the United States in space — an ambition seemingly energized by China’s desire to develop a nuclear bomb and the means to deliver it. China’s Space Program, called the “Two Bombs, One Satellite” project, was from its inception, placed under the aegis of the CCP’s Central Military Commission, thereby underscoring the military orientation of its activities in space.

During the past few years China has staged a number of space spectacles. In 2018, it quickened its exploratory space activity by staging more launches than any other nation. Also in 2018, China’s “Chang’e-4” spacecraft, named for a mythical Chinese goddess who supposedly inhabited the moon, was launched from the Xichang Space Center in southwest China. The Chang’e 4 landed its Yalu-2 land rover — a first-ever landing on the far side of the moon — on January 2, 2019. The Administrator of America’s National Association of Space Administration (NASA), Jim Bridenstine, hailed the Chinese accomplishment. China’s Chang’e 5, launched from an alternate space facility on Hainan Island in November 2020, collected more than four pounds of lunar rocks. China’s National Space Administration (CNSA), established in 1993, recently topped off another series of space triumphs by landing a land rover on Mars this past May 15.

Communist China seems not only to be directly challenging the US lead in space exploration; its space plans also appear to include an ambitious military dimension, much of whose contents look as if they are controlled by the CCP’s People’s Liberation Army (PLA). These PLA programs include a vast array of counter-space weapons systems designed to degrade or destroy US space assets. These PLA weapons include satellites and anti-satellite (ASAT) capabilities capable of inhibiting US space materiel from communicating with US military combat units. The aggressive posture of China’s space-based military programs underscores the recent regeneration of US Space Command and President Trump’s establishment of a US Space Force. The Chinese already established its US Space Force’s equivalent, the PLA’s Army Strategic Support Force, in 2015.

China, with its National Space Administration, continues to position its own equipment in space, and is planning several more launches this year and next to complete its own international space station, separate from the existing US-Russian international space station. Chinese space experts have already met several times with European Space Association (ESA) representatives to explore ways in which China and Europe can cooperate in space. European astronauts already are expressing their willingness to join in flights with their Chinese counterparts. China also has now formulated its own equivalent of the US-initiated Global Positioning System (GPS), called the Beidou (Northern Dipper) constellation of satellites. This navigational system enables Chinese military planners to precisely record the movement of foreign military assets along China’s national borders where there exist several territorial disputes with neighboring countries such as India. Beidou also closely monitors the movement of US naval assets in the Chinese-claimed waters and islands in the South and East China Seas.

One advantage that China’s totalitarian regime gives it over the US space program is that the Communist Party of China’s Central Military Commission manages the Chinese Space Program’s integrated network of space launch centers, space cities and space labs in universities.

There are four Chinese launch centers, with multiple launch pads, dispersed throughout the country: Hainan Island’s Wenchang Launch Center, the Jiuquan Satellite Launch Center, the Taiyuan Satellite Launch Center, and the Xichang Satellite Launch Center. While all of China’s launch facilities are capable of putting into orbit various satellite systems, it is the Wencheng Center on Hainan Island that will be tasked with the Tianhe (Heavenly Harmony) launches of modules for China’s Space Station. Adjacent urban sites offer logistical and industrial support for launch operations. Nearby higher education facilities offer training programs for space program technicians and astronauts. The Chinese program also includes numerous domestic and foreign-based tracking stations. In the US, however, NASA’s projected increased cooperation with wealthy, independent US space entrepreneurs, such as Elon Musk’s Space-X, may ultimately prove more capable.

Even if there are areas where the US and Chinese space programs could serve universal concerns such as monitoring climate change, international commerce, maritime piracy, and the collection of space junk from expired systems, sadly it would seem foolhardy to cooperate on any program with the CCP. It has not made a secret of its intent to unseat the US as the world’s leading superpower — economically, politically, and militarily — within the next 15-30 years. It has already declared war on the US; the US just seems not yet to have read the memo. China seems to be trying to maneuver a surreptitious surrender, by undermining the US from within, accompanied by the threat of a costly, high-powered war. Unfortunately, many in the US seem to be complying.

Meanwhile, in America, we appear busy with diversions — educating our children to hate our country; allowing our government to torpedo our economy by killing growth and launching a ruinous debt; disabling our energy supply while boosting that of our adversaries; exploding our taxes while making us support countless illegal migrants — that are enabling Communist China to fulfill its dream: enfeebling America to take control not only of “near-Earth” space but everything under it as well.

Biden Puts IRS Funding Ahead of Military and Border Security

What About Democrats Who ‘Deny Elections’?

What About Democrats Who 'Deny Elections'? Where is the concern about "election deniers" when the…