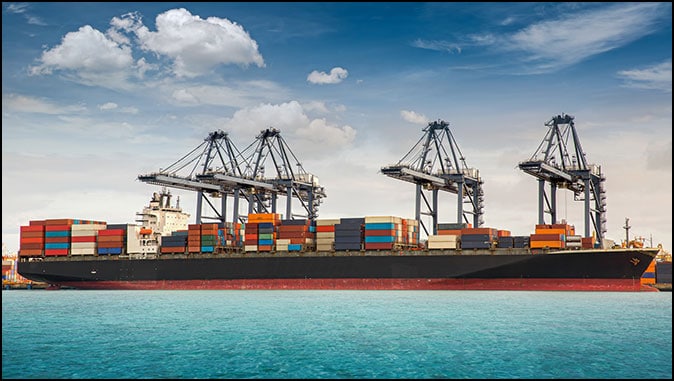 China, through investments in and ownership of ports, is expanding its global maritime reach, and its appetite for ports shows no signs of diminishing. As of July 2020, Chinese firms reportedly “(partly) owned or operated some ninety-five ports across the globe.”

Out of the 95 ports, 22 are in Europe, 20 in the Middle East and North Africa, 18 in the Americas, 18 in South and Southeast Asia, and nine in sub-Saharan Africa. Just three Chinese companies, among them COSCO Shipping Ports and China Merchants Port, two central state-owned enterprises (SOE), account for the operations of 81% of those ports.

In China, COSCO is designated as one of 53 “important backbone state-owned enterprises”, according to a February 2021 report by the Australian Strategic Policy Institute (ASPI). The report states:

“COSCO’s status as an important backbone SOE means that it’s uniquely beholden to the CCP in a way that other SOEs aren’t… COSCO’s organisational structure includes paramilitary capabilities that can be mobilised by the Chinese regime to defeat threats to the CCP’s interests. One such capability is the company’s in-house militia…”

The majority of China’s overseas port investments and operations are concentrated in a small handful of some of China’s SOEs, especially COSCO, the world’s third-largest container carrier and the fifth largest port terminal operator.

As recently as May, COSCO signed an agreement to build a new port in Peru, close to its capital, Lima.

In June, COSCO increased its stake in the Piraeus Port Authority in Greece, to 67%. COSCO had already acquired Piraeus’s two main container terminals on a 35-year lease in 2008, and the third in 2016. Also in June, COSCO, which already owns terminals in Spain — in Valencia and Bilbao — announced that, through its Spanish subsidiary, it would be opening a new rail service for freight between Valencia and Zaragoza.

COSCO has been described as the People Liberation Army Navy’s (PLAN) “leading supplier, providing Beijing with built-in shore-based support for the PLAN through a commercial enterprise structured to align with Chinese naval strategy, to an extent that leads some naval analysts to refer to COSCO as the fifth arm of the PLAN.”

Also in September, Shanghai International Port Group (SIPG), another state-owned Chinese enterprise, began operating Israel’s new port terminal in Haifa, Israel’s largest container terminal. As part of the agreement, SIGP will do so for the next 25 years.

While on the face of it, China’s acquisitions of ports looks like mere commercial transactions based on an economically driven agenda — the rhetoric China is employing — several analysts have pointed out that geopolitical concerns seem to be what are actually driving China’s port investments. While China’s acquisitions of ports ensures its strategic supply lines — say, of oil and gas from the Middle East — analysts have suggested that a military functionality is built into the strategy, as well. According to a 2020 report by the Asia Society Policy Institute:

“A deliberate military and strategic functionality seems clearly entrenched in the initiative. But the security challenge to United States or regional interests does not lie in the risk of a String of Pearls–type chain of overseas coastal fortifications from which the PLA can wage war and that it will defend. There is little evidence so far of Beijing constructing full-blown overseas military bases on the U.S. model, but there is abundant evidence it is developing a network of strategic strongpoints that can significantly raise the costs of any U.S. military intervention and lower the willingness of BRI [port] host governments to offer access or assistance to the United States.”

“The PLAN (People’s Liberation Army Navy] depends on commercial ports to support its growing operations overseas” Isaac Kardon, assistant professor at the US Naval War College, testified at the United States-China Economic and Security Review Commission’s hearing on the global power-projection capabilities of the PLA on February 20, 2020.

“The distinctive aspect of the PLAN’s efforts to support a growing overseas presence, however, is its access to a large and growing number of ports (partly) owned and operated by People’s Republic of China (PRC) firms. PLA officers and Chinese analysts tout a variety of possible dual-use functions at these ports, which in some cases are dubbed China’s overseas ‘strategic strongpoints'”.

The concern that China’s acquisition of commercial ports worldwide might be used for strategic purposes has been reinforced by indications that some COSCO acquisitions have come at such high prices that “obtaining those assets is a matter of achieving strategic national security goals rather than a financial investment that will be required to deliver market-based returns”.

“U.S. naval vessels might not be able to call regularly at ports under Chinese management because of the risk that commercial port information-technology (IT) systems could be used to monitor or interfere with military systems and jeopardize U.S. information and cybersecurity”.

For that reason, the US warned Israel that China’s management of the new Haifa port terminal could potentially damage US-Israeli security cooperation, as it might lead to US Navy ships refraining from docking there.

In a paper published in 2019 in the Naval War College Review, Christopher R. O’Dea wrote:

“By creating a global port network for ostensibly commercial purposes, China has gained the ability to project power through the increased physical presence of its naval vessels—turning the oceans that historically have protected the United States from foreign threats into a venue in which China can challenge U.S. interests.”

Another grave concern is that Chinese port investments create economic and political leverage for the Chinese Communist Party (CCP) that can affect local policy and decision making. Greece is a case in point: After China invested in and acquired much of the port of Piraeus, Greece blocked an EU statement criticizing China’s human rights record at the UN. A Greek foreign ministry spokesperson said at the time:

“Greece’s position is that unproductive and in many cases, selective criticism against specific countries does not facilitate the promotion of human rights in these states, nor the development of their relation with the EU.”

Greece also prevented a unified EU statement against China’s behavior in the South China Sea, when the Permanent Court of Arbitration ruled against Beijing’s claims to sovereignty over most of the South China Sea in 2016, and Greece opposed tougher screenings of Chinese investments in Europe — a predictable move for all nations that become beholden to Chinese investments.

The Islamists Around New York’s Mayor Eric Adams Love Jihad "Allah is our goal. The…

Biden Pays the Price for Exploiting a Crisis

Jews Don’t Count When talking about diversity and inclusion, Jews are not part of the…

As of This Moment, America Is Still a Beacon of Liberty

As of This Moment, America Is Still a Beacon of Liberty The soul of what…

How Much Does It Cost to Smear Someone as a Racist?

How Much Does It Cost to Smear Someone as a Racist? Racism accusations for corporate…