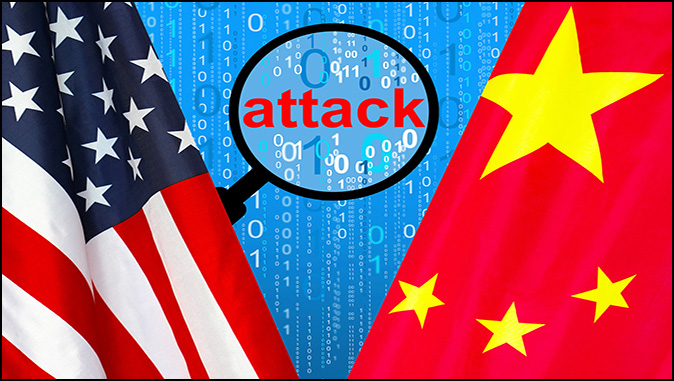 China’s Exploitation of Biden’s Border Insecurity
How the Biden Administration is enabling China’s expansion of espionage and intellectual property theft in the U.S.
By Jonathan Emord

One aspect of America’s border insecurity has largely escaped media attention but poses a dire threat: China’s massive campaign to infiltrate American public and private institutions in an effort to sap from them strategic intelligence and intellectual property in aid of China’s quest for global dominion. The United States is inundated with spies for China. In addition to tech and intelligence theft, Chinese spies are discovering and aiding in means to disrupt essential American infrastructures vital to energy production, water treatment, web communication, and national security.

Every Chinese citizen, company, and enterprise destined for interaction with American citizens, businesses, universities, laboratories, and non-profits understands from China’s Ministry of State Security and domestic laws that each must serve the motherland by spying on, stealing from, and otherwise interfering with enterprises in the United States when called upon by the CCP to do so. Indeed, state approval for visas to America and interaction with Americans and American businesses hinges on each Chinese citizen’s comprehension of a legal duty to aid China in espionage and statecraft. Failure to obey requests made of China’s citizens abroad by China’s Ministry of State Security yields severe consequences.

Through a series of actions against America’s vital national interests — and through repeated instances of inaction in the face of new and expanding threats–the Biden Administration is effectively complicit with China’s campaign to sap America’s intellectual property and strategic intelligence. If the Biden Administration truly meant to defend the United States, it would have taken immediate and significant steps to counteract China’s massive espionage and exploitation campaign. With its effective open border policy, however, President Biden and Homeland Security Secretary Alejandro Mayorkas invite all manner of destructive elements to invade the United States and wreak havoc here, not least of which are terrorists and foreign agents. Biden’s utter failure to stem the tide of Chinese theft of intellectual property and strategic intelligence is but part of this larger national security disaster whereby he leaves America defenseless against all manner of nefarious elements entering into the country and defenseless against loss of the vital technological, military, and strategic advantages we must maintain to prevent China from surpassing the United States as the world’s superpower.

By contrast, President Trump not only took action to secure our Southern Border but also approved several specific measures to counteract China’s espionage and theft campaign in the United States, among them: his DOJ’s “China Initiative” (which identified and prosecuted agents of China engaged in trade secret theft, hacking, and economic espionage and protected from nefarious compromise American infrastructure and supply chains); his ban on CCP surveillance via CCP-connected entities WeChat and TikTok; and his refusal to grant licenses for CCP-connected Huawei to purchase hundreds of millions of dollars of auto chips. Biden has systematically removed those impediments to illicit Chinese operations. He has proven by his actions and inactions that he is an enabler of the Chinese communist regime, at the direct and palpable expense of the United States.

Biden has enabled China’s massive espionage and exploitation campaign despite the stark reality that China has, uniquely, weaponized its citizens, businesses, universities, and public policy groups and associations — all having social, economic, educational, military, technological, or political ties to Americans and American firms–to steal American intelligence and technology and disrupt American business, communications, military and government. While Trump fought back against these threats, Biden has vigorously waived a white flag in the face of CCP’s aggression, making the United States more vulnerable than ever to China.

China intelligence expert Nicholas Eftimiades, who spent 34 years in key positions at the CIA, the U.S. Department of State, and the Defense Intelligence Agency, explains in Chinese Espionage: Operations and Tactics that while other nations of the world use intelligence gathering to identify and counteract threats to their national security, China uses espionage for the broader purpose of stealing trade secrets, technology, and strategic intelligence to augment its domestic efforts to dominate world markets, establish military supremacy, and further its goal of global domination. China obeys none of the norms of international behavior or law, routinely breaking all laws that interfere with its access to the means by which it may control the world. Unlike other nations which gather intelligence through professional intelligence services and agents, the CCP weaponizes its people and firms under threat of severe sanctions for disobedience with CCP commands. Eftimiades explains: “The CCP uses all elements of society to support its global espionage elements” (inducting into the global criminal enterprise everyone from individual Chinese citizens visiting the United States to university professors, think tank members, overseas educational program members and participants, student association members and participants, exchange students, etc.).

Eftimiades explains that in “2014, 2015, and 2017, the National People’s Congress and State Council made public the requirement that all Chinese citizens and companies operating in China or Chinese companies abroad) must collaborate in gathering intelligence.” Indeed, Article 22 of China’s Counter-Espionage Law and Article 7 of China’s National Intelligence Law compel Chinese citizens and organizations to serve state intelligence as it requests or suffer severe punishment. China has legally compelled its entire country to rove the world and copy, steal, and export back to China everything of potential economic, political, military, and strategic value. If China cannot invent its way to global supremacy, it plans to claw, copy, and steal its way to that supremacy.

Given the enormity of this threat (including the weaponization of Chinese citizens bound for the United States), it is clear that the Biden Administration through commission and omission is enabling China’s expansion of espionage and intellectual property theft operations in the United States, doing so by liberally keeping our borders open and disabling Trump Administration counterespionage programs.

Rather than invite our destruction, as Biden is so willingly doing, he should act promptly to protect our nation by securing our borders and acting against China’s use of its own citizens as agents of espionage and theft. At a minimum, in light of China’s weaponization of its citizens to spy on the United States, he should prohibit emigration to the United States of Chinese nationals and deport all present here except for those who genuinely seek asylum and American citizenship, upon renunciation of their citizenship in the Peoples Republic of China and proof of a consistent history of compliance with American laws.