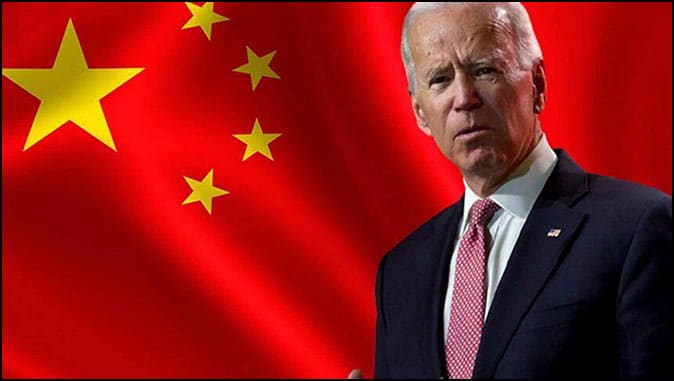 China will have a great friend in the White House if Joe Biden wins the presidency. At the same time, Joe Biden’s son Hunter will acquire more friends in Beijing anxious to do business with a member of the U.S. president’s immediate family in order to gain access to the Oval Office.

Joe Biden has a long record evidencing his pro-China bias. Thus, it was not a surprise when Biden said last year about China: “They’re not bad folks, folks…They’re not competition for us.” After Biden received backlash for this remark, Biden’s handlers tried to turn him into a hawk on China. But Biden cannot escape his enabling of China’s rise in power while he was in public office, helping China to become the U.S.’s number one national security threat.

As Barack Obama’s vice president and point man on China, Biden cozied up to China’s Communist Party leaders. At the opening of the third session of the U.S.-China Strategic & Economic Dialogue in May 2011, Biden said that “a rising China is a positive, positive development, not only for China but for America and the world writ large.” Biden characterized the relationship with China sought by the Obama-Biden administration as “a cooperative partnership.”

In August 2011 at a U.S.-China business round table held in Beijing, Biden declared that “President Obama and I, we welcome, encourage and see nothing but positive benefits flowing from direct investment in the United States from Chinese businesses and Chinese entities.”

Following meetings between Biden and Chinese President Xi Jinping (then-Vice President) in 2011 and 2012, the Obama-Biden administration agreed to allow Chinese companies access to U.S. capital markets without having to go through the same rigorous inspection of their books by U.S. regulators that is required for U.S. companies. Biden’s idea of a “cooperative partnership” was to help boost the economic power of a “rising China” to further heights by handing Chinese companies an opportunity to cheat on a silver platter.

China did not become our chief adversary on the global stage overnight. China’s economy took off only after it joined the World Trade Organization (WTO) in 2001. And Joe Biden was in China’s corner every step of the way, beginning with his strong advocacy for China’s membership in the WTO while he was in the Senate.

In July 2000, during a Senate Foreign Relations Committee hearing on giving permanent normal trade relations status to Communist China, then-Senator Biden asserted as a foregone conclusion that “granting permanent normal trade relations to China has little to do with our national security. It does not increase their access to controlled U.S. technology. It does not increase their access to our markets.” Biden then claimed that bringing the Chinese regime into contact with the international norms of the WTO “is the best way to get China to clean up its act.”

Biden was wrong as usual. The Chinese Communist dictatorship did not clean up its act. It did the opposite. As former assistant director of intelligence for the FBI Kevin R. Brock observed in an article he wrote for The Hill, “China largely has cheated its way to prosperity.” Stealing valuable intellectual property and using deceptive tactics to gain an unfair economic advantage are second nature to the regime and its state-owned companies. The regime’s atrocious human rights abuses have gotten much worse.

According to the Economic Policy Institute, “the growing U.S. trade deficit with China has eliminated 3.4 million U.S. jobs between 2001 and 2017, including 1.3 million jobs lost since 2008 (the first full year of the Great Recession).” This all took place since China became a member of the World Trade Organization, right under Biden’s nose and with his help while he was a senator, vice president, and Obama’s point man on China.

The most benign explanation for Biden’s pro-China bias is that he is a fool, who is oblivious to China’s growing threat to the U.S.’s position as the world’s preeminent global economic and military superpower.

There is also a more sinister explanation for Biden’s willingness to give China the benefit of the doubt. Joe Biden’s son Hunter reportedly cashed in while his father was the point person on Obama-Biden administration policy towards China.

Peter Schweitzer, a prominent author on government corruption who put together a documentary entitled “Riding the Dragon: Uncovering the Bidens’ Chinese Secrets,” has exposed Hunter Biden’s involvement in questionable deals with Chinese government affiliated entities while his father was vice president. Schweitzer charged that “the Bidens were prepared and willing to make money, even if it damaged our military posture vis-a-vis the Chinese who are our chief rivals on the global stage.”

Hunter Biden was involved with a Chinese-dominated investment firm called Bohai Harvest RST (BHR) through a U.S. company named Rosemont Seneca Partners that Hunter had formed in 2009 with Chris Heinz, the stepson of former Secretary of State John Kerry, and others. BHR was formed in late 2013 by a merger between the Chinese-government linked firm, Bohai Capital, and Rosemont Seneca Partners.

Around the time of the merger creating BHR, Hunter Biden flew aboard Air Force Two with his father to China. While in China, Hunter helped arrange for Jonathan Li, CEO of Bohai Capital, to “shake hands” with then-Vice President Joe Biden. Hunter Biden met with Li for reportedly a “social meeting.” The coincident timing of Hunter Biden’s sojourn to China with his father, the forming of BHR by Bohai Capital and Rosemont, and the father and son face times with Bohai Capital’s CEO is suspicious, to say the least. Moreover, the business license of BHR was approved by China shortly after the Biden trip’s conclusion. Through its equity participation in BHR’s business, Hunter’s firm stood to make a tidy profit.

According to Grassley’s account, “In September 2015, BHR joined with a subsidiary of the Aviation Industry Corporation of China (AVIC) to acquire Henniges for $600 million. Because the acquisition gave Chinese companies direct control of Henniges’ anti-vibration technologies, the transaction was reviewed by CFIUS. CFIUS approved the transaction despite reports that in 2007, years before BHR teamed up with AVIC’s subsidiary, AVIC was reportedly involved in stealing sensitive data regarding the Joint Strike Fighter program. AVIC later reportedly incorporated the stolen data into China’s J-20 and J?31 aircraft.”

Aviation Industry Corporation of China is identified by the Pentagon as one of the Chinese companies “owned by, controlled by, or affiliated with China’s government, military, or defense industry.” The Obama-Biden administration’s approval of the joint acquisition of a U.S. company with military-related technology by an AVIC subsidiary and its partner BHR is highly troubling. Obama’s VP and China point man Joe Biden needs to answer some key questions now as voters consider his candidacy for the U.S. presidency.

For example, what interactions did CFIUS members or their staffs have with Obama, Biden or their staffs on the Henniges transaction? What did Joe Biden know about the joint acquisition of Henniges by BHR (in which his son’s firm had an equity interest) and a subsidiary of the Chinese government affiliated AVIC? Did Biden or his staff exert any pressure on CFIUS to approve the Henniges acquisition despite its obvious national security implications? Was the Henniges transaction subject to a national security arrangement? If not, why not?

Joe Biden needs to answer these questions and others now without equivocation concerning the Chinese-related business dealings of Hunter Biden’s firm while Joe Biden was vice president. Otherwise, voters will be entitled to assume the worst about what is likely to lie ahead for U.S.-China relations if Hunter’s father Joe Biden is elected president.