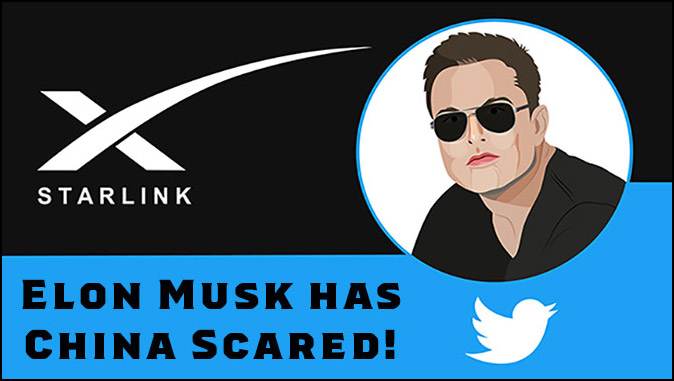 Chinese military researchers recently called for the destruction of Elon Musk’s Starlink satellites, an extraordinary threat for a state to make against a private foreign enterprise.

In December 2021, China filed a complaint with the United Nations, claiming that two of Musk’s Starlink satellites had nearly collided with the Tianhe module of its Tiangong Space Station — in April and October of 2021– and that Chinese astronauts had been forced to maneuver the module of the station to avoid the collision. Starlink is part of Elon Musk’s SpaceX and the satellites are part of a plan to make internet coverage from the satellites available worldwide, with the goal of launching nearly 12,000 Starlink satellites into low Earth orbit.

Space is becoming crowded and risks of collision — whether with satellites or space debris — are not new. Tellingly, China was among the first to help create much of that debris: In January 2007, China tested its first successful anti-satellite missile (ASAT), destroying one of its own inactive weather satellites and creating one of the world’s largest space debris incidents. That space debris is still floating around in space, causing collision risks every day.

The United States rejected China’s claims that the Starlink satellites had endangered China’s space station. The US stated that if there had been a “significant probability of collision” with China’s space station, the U.S. would have given notice to China ahead of time. “Because the activities did not meet the threshold of established emergency collision criteria, emergency notifications were not warranted in either case.”

China is now taking things a step further: Chinese military researchers are threatening that Musk’s Starlink satellites must be destroyed. The problem, however, does not appear so much to be the fear of collision, but rather that China believes that Starlink could be used for military purposes and thereby threaten what China calls its national security.

Five senior scientists in China’s defense industry, led by Ren Yuanzhen, a researcher with the Beijing Institute of Tracking and Telecommunications — which is under the People Liberation Army’s (PLA’s) Strategic Support Force – recently wrote that “a combination of soft and hard kill methods should be adopted to make some Starlink satellites lose their functions and destroy the constellation’s operating system.”

According to the scientists, China should “vigorously develop countermeasures” against Starlink, as such capabilities are necessary for China “to maintain and obtain space advantages in the fierce space game.”

Unsurprisingly, China has eagerly copied Elon Musk’s SpaceX to achieve its own space ambitions: China’s Long March 2C rocket, for instance, which China launched in the summer of 2019, had parts that were “virtually identical” to those that are used to steer the SpaceX Falcon 9 rocket.

China is not the only state actor to show an interest in interfering with Musk’s Starlink satellites. Russia too has sought to jam Starlink’s internet service in Ukraine and failed. “Starlink has resisted Russian cyberwar jamming & hacking attempts so far, but they’re ramping up their efforts,” Musk tweeted in May.

Starlink is a problem for Russia because Musk’s satellites have enabled Ukraine to stay connected to the internet – and the rest of the world – amid Russian President Vladimir Putin’s attempts to cut the country off.

Musk began to send Starlink terminals to Ukraine in late February at the request of Ukrainian government officials, as a backup for when Russia would predictably try to cut off internet access. According to one US general, the use of Starlink in Ukraine ruined Putin’s attempts to isolate the country.

“The strategic impact is, it totally destroyed Putin’s information campaign,” said Brig. Gen. Steve Butow, director of the space portfolio at the Defense Innovation Unit. “He never, to this day, has been able to silence Zelenskyy.”

“We’ve got more than 11,000 Starlink stations and they help us in our everyday fight on all the fronts,” Mykhailo Fedorov, Ukraine’s vice prime minister, told Politico. “We’re ready, even if there is no light, no fixed internet, through generators using Starlink, to renew any connection in Ukraine.”

China’s threats against Musk’s Starlink is more proof that the country is not ready to let anyone stand in the way of its “fierce space game”, as China put it. General David Thompson, the U.S. Space Force’s first vice chief of space operations, possibly trying to downplay the Chinese’s Communist Party’s threat to the West, described it as merely a “shadow war.”

In this “space war”, China – and Russia to a slightly lesser degree — is conducting attacks against U.S. satellites with lasers, radio frequency jammers, and cyber-attacks every day. While the attacks are “reversible” for now, which means that the damage to the attacked satellites is not permanent, they demonstrate China’s malign intentions.

“The threats are really growing and expanding every single day. And it’s really an evolution of activity that’s been happening for a long time,” Thompson said in November 2021. “We’re really at a point now where there’s a whole host of ways that our space systems can be threatened.”

In addition to its “fierce space game”, China is forging ahead with a number of projects that will significantly accelerate the country’s space capabilities.

China has reportedly sped up its program to launch a solar power plant in space. The purpose of the plant is to transmit electricity to earth by converting solar energy to microwaves or lasers and directing the energy to Earth, according to the South China Morning Post. The first launch of the project is scheduled for 2028 and will be the world’s first such project in space. It is probable that China got the idea from the US; NASA reportedly proposed a similar plan more than two decades ago but never went on to develop it.

China recently launched its third crewed mission to the Tiangong Space Station’s Tianhe module, where three astronauts will work on completing the space station before returning to Earth in December. China only launched the first module of the Tiangong Space Station in April 2021, but expects to have the space station fully crewed and operational by the end of the year, when the space station will have an additional two science lab modules and a robotic cargo ship. The space station will also help China to deploy and operate its new space telescope, Xuntian, meant “to rival NASA’s aging Hubble Space Telescope, with a field of view 300 times larger and a similar resolution. It will make observations in ultraviolet and visible light, running investigations related to dark matter and dark energy, cosmology, galactic evolution, and the detection of nearby objects.” Xuntian is scheduled to launch in 2024.

China’s explicit goal is to become the world’s leading space power by 2045. It is important to keep in mind that China’s space program – even what might look like harmless, civil aspects of space exploration – is heavily militarized. The organization in charge of China’s manned space program, for instance, is the China Manned Space Engineering Office, which is under China’s Central Military Commission Equipment Development Department. Similarly, the People’s Liberation Army runs China’s space launch sites, control centers and many of China’s satellites.