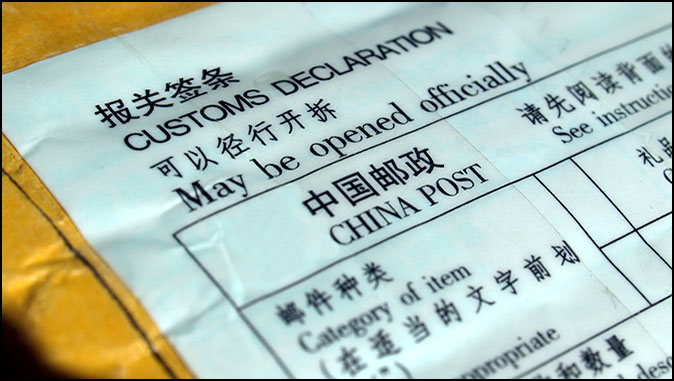 Residents in all 50 states have received packages of seeds, sent unsolicited from China. Many of the packages, mailed through the Chinese state-run postal system, were mislabeled as “jewelry” for U.S. Customs purposes.

“DO NOT plant them,” officials in every state have warned.

“They could be invasive, meaning they may have the potential to introduce diseases to local plants, or could be harmful to livestock,” the Montana Department of Agriculture noted in a statement on Monday, referring to the Chinese seeds. “Treat them like they are radioactive, like they are Kryptonite,” said Texas Agriculture Commissioner Sid Miller.

Trump administration officials now need to ask one question: Are the seeds a biological-warfare attack on the United States?

China acceded to the Biological and Toxin Weapons Convention in 1984 but today is almost certainly in violation of its obligations.

The State Department’s most recent report to Congress on worldwide compliance with arms-control treaties, made public June 23, contends China possessed an “offensive biological warfare program from the early 1950s to at least the late 1980s.” There is, the report states, “no available information” to show Beijing fulfilled its treaty obligations “to destroy or to divert to peaceful purposes” its program.

Moreover, China today is almost certainly conducting biological weapons research in violation of its obligations. “The United States has compliance concerns with respect to Chinese military medical institutions’ toxin research and development because of the potential dual-use applications and their potential as a biological threat,” the State Department report notes.

Perhaps most disturbingly, Beijing is directing its efforts at particular segments of humanity. As a “senior Trump administration official” in May told the Washington Times about the Chinese program, “We are looking at potential biological experiments on ethnic minorities.” China, taking inspiration from the Third Reich, is designing both pathogens to target certain ethnic groups and pathogens that will leave other groups alone.

China has had a long history of studying the offensive use of viruses. “Intelligence sources found evidence of two epidemics of hemorrhagic fever in the area in the late 1980s, where these diseases were previously unknown,” said Ken Alibek, formerly of Biopreparat, a Soviet-era producer of bioweapons, referring to a location near a biocontainment lab. “Our analyst concluded that they were caused by an accident in a lab where Chinese scientists were weaponizing viral diseases.”

SARS, the epidemic beginning in 2002 in China, may also have started with a leak of a “combat virus,” as Russian experts have speculated. Then, Julie Gerberding of the U.S. Centers for Disease Control and Prevention said the SARS genome “didn’t look like much of any of the viruses we already had in our reference strain collection.” Some believe SARS started with a natural mutation but, as the World Health Organization explained at the time, was later fueled by lab leaks.

Today, there are indications the COVID-19 pandemic started with a leak from a bioweapons lab. The core of the argument, outlined by Jamie Metzl in the Wall Street Journal, is that the first outbreak occurred near the Wuhan Institute of Virology, which had been engineering coronaviruses to make them more virulent. He pointed out that the lab is located near the first outbreak and hundreds of miles from where the closest strain of the virus was found in a natural environment, a cave full of bats.

Especially troubling is that in February, China sent Major General Chen Wei, described as “China’s top biowarfare expert,” to head the P-4 biosafety lab at the Wuhan Institute. Chen, many speculate, was given the task of removing evidence of a leak or the existence of a weapons program.

Regardless of the origin of the coronavirus, Chinese ruler Xi Jinping in December and January took steps — falsely denying the contagiousness of the disease and pressuring countries not to impose travel restrictions on arrivals from China — that he knew or should have known would inevitably spread the virus beyond China’s borders. In short, China in effect launched a biological attack on the world.

Attacking the world — specifically the United States — with disease is consistent with the doctrine of China’s People’s Liberation Army, as is evident from Unrestricted Warfare: China’s Master Plan to Destroy America, the 1999 book from two Chinese colonels.

Moreover, there is also an infamous statement attributed to General Chi Haotian. In a secret speech to senior Communist Party officials sometime around 2002, Chi, then China’s defense minister, stated there was a need for “new living space” because of the exhaustion of existing Chinese territory. Chi suggested the “mass colonization” of the land occupied by United States as the best option.

“We are not as foolish as to want to perish together with America by using nuclear weapons,” he said. The way to “clean up” the U.S., Chi argued, would be through biological attacks.

“Even though we cannot confirm whether General Chi gave that speech, suspicions surrounding China’s concealment of the SARS epidemic plus suspicions of the connections between research at the Wuhan Institute of Virology with the global pandemic only add to the longstanding concern about Beijing’s bioweapons program,” Richard Fisher of the Virginia-based International Assessment and Strategy Center told Gatestone.

That brings us back to the Chinese seeds now in the U.S. Some think the packages could be part of a “brushing scam” — an effort to create fake customer reviews on online retail platforms — but that appears unlikely. For one thing, there is no indication these seeds — there are several varieties of them — are either branded or are offered for sale.

Yet whatever the reason for their distribution — commercial or geopolitical — the seeds can cause great damage to the United States. “For forty years, the Chinese have used unconventional tactics to further their ambitious goal of defeating the United States,” said Brandon Weichert of the Weichert Report to this publication. “They employed economic warfare, lawfare, information warfare, and cyber warfare. Beijing looks like it attempted biowarfare with the novel coronavirus from Wuhan. Now, they may be trying their hand at ecological warfare.”

China for decades has been broadening the concept of warfare, and with the mysterious seeds there just may have been another attack on the United States.