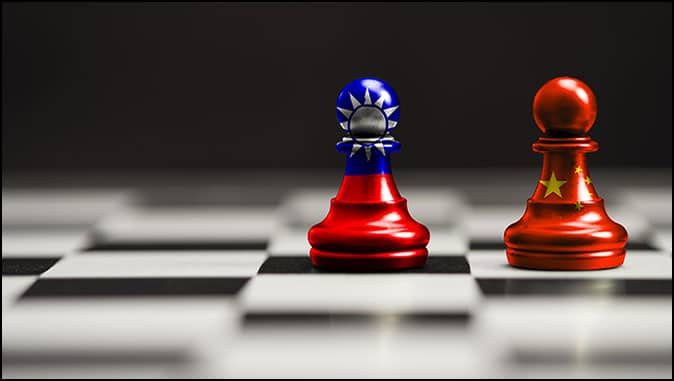 China Lays Out Blueprint for Taiwan Invasion
By Daniel Greenfield

The question isn’t whether China will invade Taiwan, it’s increasingly a question of when.

Under the friendly Biden regime, the Communist dictatorship has ramped up its campaign of military intimidation, exhausting Taiwan’s air force, and demonstrating air superiority. After finalizing its conquest of Hong Kong, while ignoring weak protests from the rest of the world, it’s signaling to Taiwan that it has a choice between voluntarily joining China or being conquered. The takeover of Hong Kong has destroyed the lie that there is going to be One China under Two Systems. There’s only one China under the rule of the Communist Party.

A magazine in China published the outline of a three-stage invasion of Taiwan to mark the centenary of the Chinese Communist Party, as Beijing pushes rhetoric about completing reunification with the island nation.

“We must solemnly warn some people that the road of Taiwan independence only leads to a dead end,” the magazine stated on Weibo, according to the report.

According to Naval and Merchant Ships, ballistic missile attacks in the first round would destroy Taiwan’s data gathering capabilities, including at airports.

China’s short-range ballistic missile, the DF-16, would be deployed in addition to munitions dispensers.

“The attacks against Taiwan’s airports would continue until [Chinese] surface troops had accomplished an assault landing,” the magazine distributed by the China State Shipbuilding Corporation said.

The second stage of the attack would include cruise missile attacks, including the YJ-91 and CJ-10, launched from land, ships and submarines. People’s Liberation Army surface ships would use drones to survey the damage afterward.

The third and final stage would consist of artillery strikes from ships and on-land forces to remove “any remaining obstacles,” the article said.

Xi Jinping said Thursday on the Party’s centenary that he stands by “an unshakable commitment” to unify China and Taiwan, according to state media.

Nice of Xi to paraphrase Hitler and Stalin without providing proper attribution.

The bottom line though is that China faces an increasingly weakened America. And it’s doubtful that the United States would have actually gone to war to defend Taiwan at any time except maybe under Reagan or George W. Bush. We might put some assets in the general area in the hope that the PRC wouldn’t directly provoke a war, but the problem with bluffing when everyone knows you’re bluffing is painfully obvious.

China tested the world by ruthlessly suppressing mass civilian protests in Hong Kong. It’s now going to drill down to remove any vestiges of free speech and root out Christianity, much the way that Putin is doing with dissident Christian groups in Russia. And then on to Taiwan.

The PRC doesn’t actually want to invade Taiwan. It hopes to bring a government to power that would cut a deal with China even as it eliminates any conceivable basis for believing that it would be bound by any such deal. But between the usual useful idiots, the actual agents of China, and people who understand that there may be no Plan B, that may very well happen.

And the United States has no meaningful response except formal condemnations.